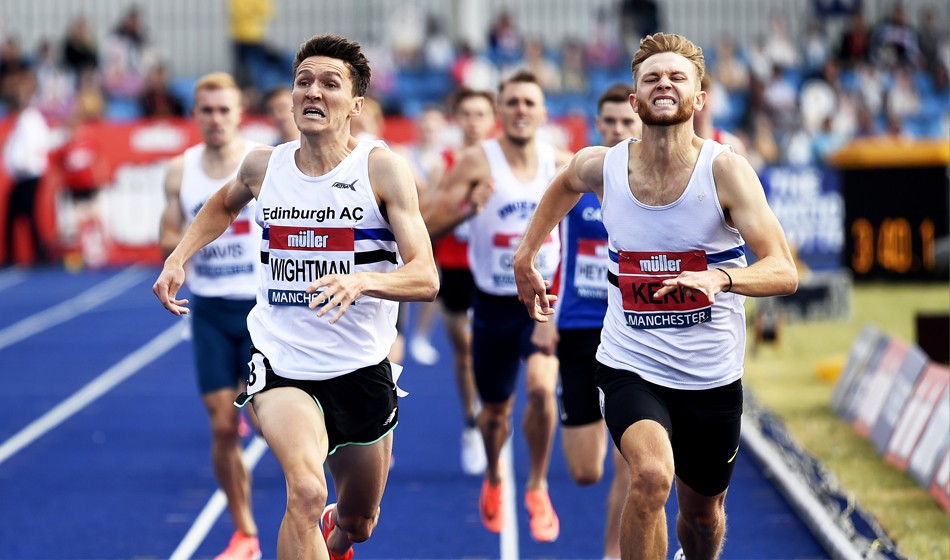 Unlike last year, the event will be broadcast by BBC online and you can also follow AW’s coverage on our website and social media channels courtesy of our team at the event.

The event timetable is packed with a near full array of track and field events, including combined events and several disability athletics events too.

So which are the most tantalising events? It’s hard to choose but we’ve listed 10 here…

Josh Kerr pipped Jake Wightman at last year’s Olympic trials in Manchester in an epic duel and the pair are set to renew their rivalry this weekend.

Wightman leads the British rankings for 2022 going into the race with 3:32.62 and he ran a Scottish one mile outdoor record of 3:50.30 in Oslo last weekend. However, Kerr clocked 3:29.05 to win Olympic bronze last year and ran a British indoor mile record of 3:48.87 at the start of this year.

This is hardly a two-horse race, though. Jake Heyward has run 3:33.54 this year and 3:32.82 in the past and he travels over from his base in Oregon for these championships.

Neil Gourley beat Kerr and Wightman to this title in 2019 and after missing most of 2021 with injury he is back his best and showed great speed with a 1:44.82 clocking for 800m in Germany last week.

Moving up from 800m, Elliot Giles will be dangerous in a slow, tactical race. Look out too for Emsley Carr Mile winner Matt Stonier, the 2020 British champion George Mills and 3:30.62 man Charlie Da’Vall Grice as he battles back from early-season injury.

This event is so strong that any athletes making it through the trials know they will have a chance of making an impact in the major championships finals this summer.

Jazmin Sawyers won last year’s title ahead of Abigail Irozuru and Lorraine Ugen and both Sawyers and Irozuru went on to make the Olympic final as Ugen took world indoor bronze in March this year.

Ugen’s indoor mark of 6.82m is the best by a Brit this year but Sawyers tops the outdoor rankings with 6.68m. Irozuru, meanwhile, will be guaranteed good support as a member of Sale Harriers Manchester.

Look out for Jahisha Thomas and Funminiyi Olajide plus heptathlete Holly Mills too.

Joshua Zeller leads the UK rankings going into the championships after some great recent form in the United States which includes a 13.19 victory at the Big Ten Champs in Minneapolis and a bronze medal in the NCAA Champs in Oregon.

The former European under-20 champion was only sixth last year but will be going for gold in Manchester. However, he will have to beat Andy Pozzi and David King, not to mention defending champion Tade Ojora, who has also been in good form in the US and was eighth in the NCAA final.

Will Pozzi’s poise and experience be enough to keep his younger rivals at bay. Don’t discount King either, as he’s been in the form of his life this year.

Many eyes will be on Olympic 800m silver medallist Keely Hodgkinson who may be keen to also run the 4x400m in Eugene even though she only currently ranks 10th in the UK at 400m this season with her 52.42 second place at the UK Indoor Championships.

With the opportunity of relay places offering possible world and European medals, it will be one of the most competitive events of the weekend and four athletes already have the individual standard of 51.35 this summer.

Topping the lists is Victoria Ohuruogu, the younger sister of former Olympic and world champion Christine. This year she has improved from 51.99 to 51.05 in America.

Zoey Clark has also improved to 51.22 and Olympians Ami Pipi and Nicole Yeargin, while not as fast as in 2021 yet, are moving in the right direction with respective times of 51.31 and 51.32.

Laviai Nielsen, fourth in the last Europeans, is not yet in her 50.83 PB shape but has the European standard with a 51.70 while others in with a shout with making one of the relay squads along with Hodgkinson if they can run PBs are Hannah Williams, Lily Beckford, Carys McAulay, Natasha Harrison and Hannah Kelly.

Traditionally the blue ribbon event of the weekend, all eyes will be on Reece Prescod to see if he can repeat the brilliant form he’s shown in Europe recently. In Ostrava three weeks ago he ran 9.93 into a slight headwind and in Oslo last week he was a close runner-up to Andre De Grasse of Canada.

The 200m specialist Adam Gemili is also entered, while James Ellington continues his comeback to fitness from a career-threatening bike accident.

He’s unlikely to make an impact, but multiple former champion Dwain Chambers, now aged 44, is also in the entries. There will be a new champion too as the 2021 crown went to CJ Ujah. 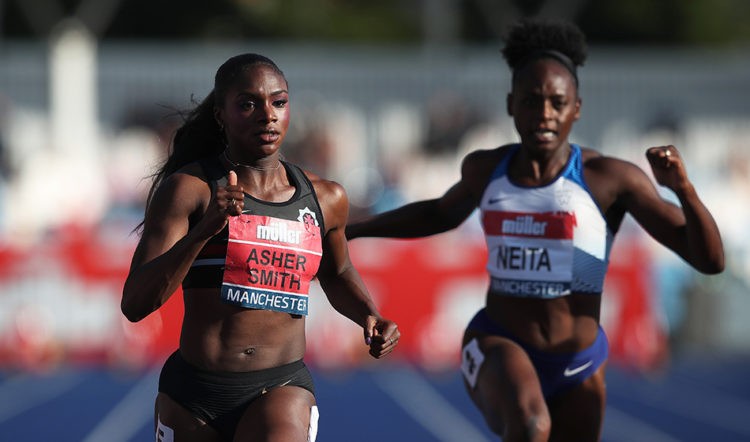 It is probably no accident that the women’s 100m final has been placed at the end of the programme on Saturday. Organisers will want the crowd to stay until the end and leave with a smile on their face and exhilaration coursing through their veins.

If the leading protagonists run to form, they will get this. Dina Asher-Smith defends her title and has been rounding into good form this summer with the firm objective of peaking in late July and August.

The world 200m champion heads the UK rankings in 2022 but only just as her 10.98 from the Pre Classic in Eugene is one hundredth of a second faster than Daryll Neita ran when placing fourth in Paris last week.

Behind the big two, Imani Lansiquot leads the battle for bronze along with Kiah Dubarry-Gay, Kristal Awuah, Desiree Henry and Asha Philip.

Jessie Knight went No.4 on the UK all-time rankings with 54.09 in Belgium last month and has been in fine form on the international circuit.

Lina Nielsen is also in PB shape after 54.73 in Rome recently. Knight will be strong favourite to successfully defend her title but along with Nielsen, there is Hayley McLean, Jess Turner and for heptathlete Jessica Tappin in the race for medals and selection spots.

The US-based Purchase is the best of a talented bunch so far with 70.63m. The athletes have some way to go yet to threaten Hitchon’s best mark of 74.54m and even the World Champs standard (72.50m) and European qualifier (71.80m) are tantalisingly out of reach.

As Simpson-Sullivan, who is also based in the US, prepares to defend her title, though, it will be interesting to see how it unfolds. 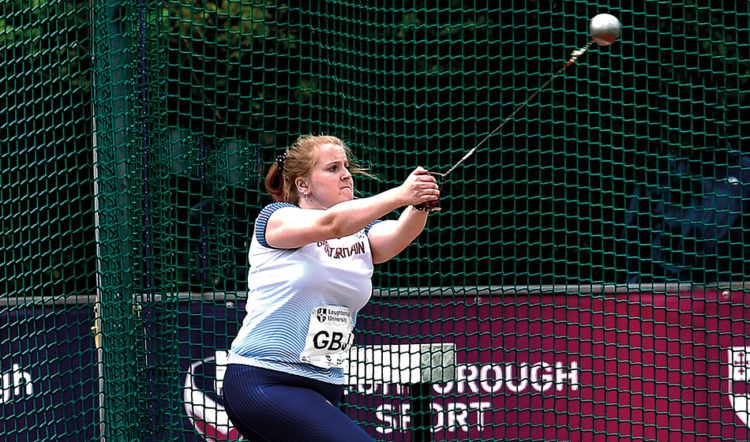 After making the podium at the World Indoor Championships in March, Marc Scott will be looking for more medals this summer and faces a strong domestic line-up in Manchester.

Sam Atkin has been in good form lately, winning the British 10,000m title in Highgate among other things, although he withdrew from his latest 5000m race in Oslo.

Patrick Dever, who is another US based runner, will be keen to make an impact too.

In his first race of the summer, two-time Olympic finalist Andy Butchart returns, while watch out as well for Ellis Cross and Jack Rowe. 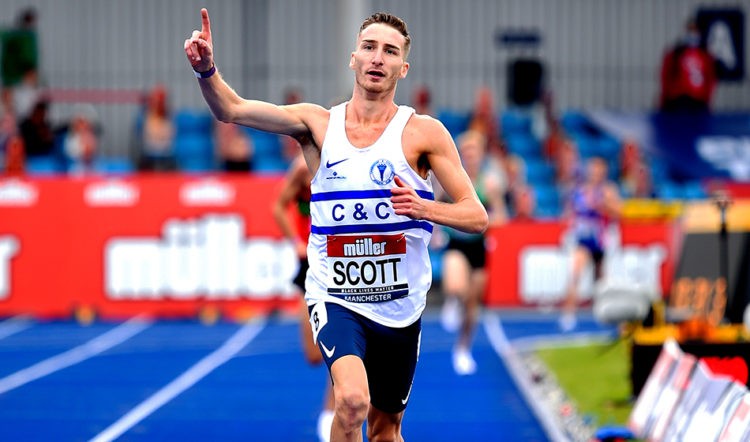 What an incredible race this promises to be and possibly the highest-quality men’s 800m at the national championships in history.

Max Burgin leads the way on paper with his spectacular 1:43.52 victory in Turku recently – a performance that only Seb Coe, Steve Cram and Peter Elliott have beaten from a British perspective. However, how will his front running style fare with no pacemakers and a pack of fast-finishing rivals hot on his heels?

Kyle Langford, who was fourth at the 2017 World Champs but has struggled to fulfil his potential since then, has bounced back to form lately with a 1:44.61 win in Germany a few days ago.

Langford beat Ben Pattison at the Bryggen Sports meeting in Manchester earlier this summer but Pattison is also a major contender here with a number of fast times this season capped by a 1:45.16 PB in Sweden this month.

Then there is the defending champion, Elliot Giles, who is also entered for the 1500m this weekend. 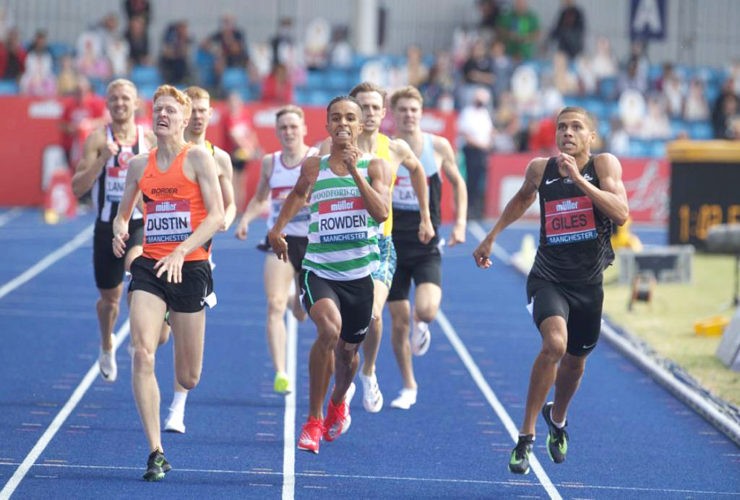 Daniel Rowden and Jamie Webb have fantastic pedigree with PBs in the low 1:44 range but have struggled to find their best form lately. Similarly, Ollie Dustin made the Olympic team last year but has not been at his best so far in 2022.

Add to this the tall figure of Thomas Staines, Guy Learmonth and Reece Sharman-Newell and we have the makings of a classic.

When it comes to selection for the World Championships, the top two athletes in each event will be automatically picked as long as they have the qualifying standard. Selection for the European Championships is more relaxed with UK Athletics promising to take a full team of athletes as long as they have hit qualifying standards.