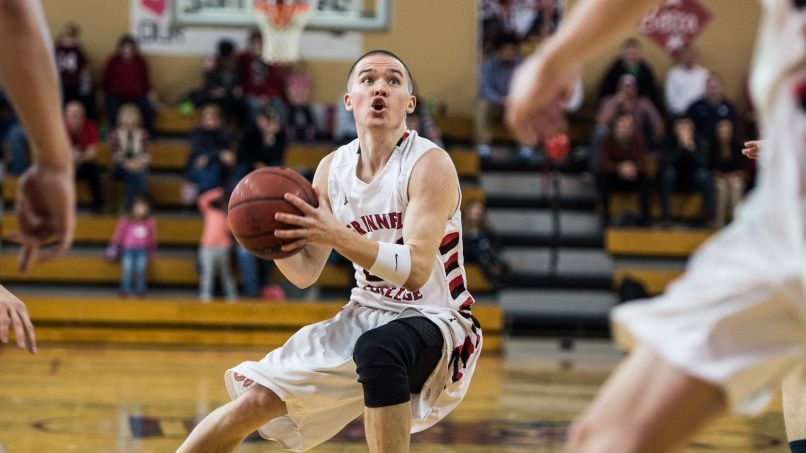 On Nov. 20, 2012, former Grinnell College star Jack Taylor put together a stat sheet that would make Steph Curry gasp. He shot 71 3-pointers and made 27 of them.

He had 58 points. At halftime. In all, Taylor recorded 108 field goal attempts. (Wilt Chamberlain, when setting the NBA record with 100 points on March 2, 1962, recorded 63.) An opposing player, David Larson, scored 70 points.

Nobody remembers that, though.

That’s because the 5-foot-10 guard finished the game, against Faith Baptist Bible College, with an NCAA-record 138 points.

Taylor’s mother had traveled to the game — in the middle of Iowa — which took place two days before Thanksgiving. But as her son’s numbers ticked up, and the media requests went from a trickle to a surge after Grinnell won 179-104, she realized they wouldn’t be going home that night. Appearances on “SportsCenter,” “The Today Show” and “Jimmy Kimmel Live!” among many others, would follow. LeBron James would call him “Sir Jack” and compare him to Chamberlain. Kobe Bryant would praise his “Mamba” mentality.

“To be mentioned by him, that was just icing on the cake,” said Taylor, who also scored 109 points in a different game the following season. “That was incredible.”

A decade later, Taylor has settled into a life outside basketball in Black River Falls, Wisconsin. He is married with two daughters. He owns a video production company and is a local TV personality.

And he’s still going viral, albeit on a smaller scale. A few years ago, he built a 40-foot-tall snowman, which he claims is the tallest in Wisconsin’s history, with his family. He has more than 15,000 subscribers on a YouTube channel that mostly features clips about life in his hometown, where he returned after college. Last week, he dropped a rap video for his song “Girl Dad.”

After scoring 138 points in a single game, however — a record that is still standing — Taylor couldn’t duplicate the rush he enjoyed that night. Who could? He attempted to go pro, trying out for a G League squad and even considering going overseas, but when those opportunities didn’t work out, he ended the basketball chapter of his life. No, Taylor didn’t play a bunch of rec league ball or search for a coaching gig. He just moved on. It was easier that way. He’d achieved all he believed he could and experienced a moment in scoring 138 points that no other college basketball player had ever enjoyed. That was sufficient for him.

“Just like every other athlete, I’m human as well,” Taylor said. “And whenever the ball stops bouncing for any athlete, it’s tough. I just had to realize what situation I was in. I was a good Division III basketball player that had a special moment on a special team in a special program that created a special moment, one that, 10 years later, we’re still talking about.”

However, he says he never had the chance to offer an explanation for that record-breaking night. While many praised Taylor’s effort, others knocked him for shooting too much against a struggling Faith Baptist Bible College team — a member of the National Christian College Athletic Association — that had lost its first 10 games that season.

“When they broke off from the way that they normally play to try to achieve a record, and they’re going to specifically single one player out to try to score all the points against an inferior opponent just to gain some notoriety, [it] probably raised the eyebrows of a few people inside the industry,” said Ripon College head coach Ryan Kane, who faced Grinnell that same season.

But Taylor says the backlash lacked context. In “The Grinnell System,” players are compelled to shoot within the first seven seconds of the shot clock. Grinnell presses for 40 minutes, and the team also subs five players at a time, typically playing the top players 18 to 20 minutes per game.

That night, Taylor played defense — he started at the front of the full-court press and trapped on the inbounds pass but didn’t do much beyond that — and took a shot whenever he touched the ball, as instructed by the coaching staff.

“If I wasn’t shooting in the first couple of seconds after crossing half-court, my coach would literally yell at me,” Taylor said. “It was a scorer’s dream.”

Then-head coach David Arseneault wanted to get his former UW-La Crosse transfer going after a rocky start in his first two games. The plan to feed Taylor — one the seniors on his team initially resented because of its emphasis on one player — intensified at halftime.

“At that point, the team hasn’t really bought into the game plan,” Arseneault said. “They were doing it because they were told to do it, but when they found out he had 58 points, everybody jumped on board and said, ‘Let’s go. Let’s see what we can do.'”

After he took the Grinnell job in 1989, Arseneault tried to play a slower, more cautious, traditional style. But he figured that wouldn’t help him get recruits to come to an expensive school ($60,000 per year) in the middle of Iowa without scholarships. So he invented “The Grinnell System.” His idea worked.

“I had to change because I wasn’t having fun and they weren’t having fun,” Arsneault said. “I figured I’d try something new.”

Taylor is one of four players in Grinnell — and Division III — history to end his career with four games of 50 points or more. In all, Grinnell is mentioned 175 times in the NCAA’s official Division III record book for men’s basketball.

Ten years after Taylor maximized Arsneault’s system, the feat still helps a program that continues to run Arseneault’s system under his son, David Arseneault Jr., who saw it happen firsthand as an assistant for his father.

“Most recruits, the first thing they ask me about is Jack Taylor’s 138-point game,” Arsneault Jr. said. “The aftereffects are still just so lasting in a positive effect for our program.”

But Taylor put all of that behind him. The 138-point game is mostly something that’s jokingly mentioned in his group chats these days. His family and career are his focus. And the snow will come soon. He might have another gigantic snowman to build.

While he has developed a life outside basketball, Taylor knows Nov. 20, 2012, will still define him to most. That’s part of the reason he ended that chapter in his life once college ended. A part of him felt like he’d failed to reach his potential when he didn’t turn pro, and he worried any connection to basketball might convince him to make another run at his dreams, so he kept his distance from the sport.

But in the back of his mind, he knew the anniversary would come soon. As it grew closer, he had a choice: He could run from the moment, or he could do what he did that night, and embrace it.

Earlier this year, Taylor called his former coaches at Grinnell and asked them if he could take a trip to the school for the first time in years and make a video about his 10-year-old 138-point performance.

In October, Taylor arrived at a Grinnell practice as a “recruit.” He wore a mask so the players couldn’t identify him. Taylor was rusty, and wasn’t sure how he would feel as he jumped into a pickup game with the current players.

Some of the magic was still there, though.

“True to form,” said the elder Arseneault, who attended the practice, “he stuck his first 3-pointer.”

After he took his mask off and revealed who he was, Grinnell’s players all stood in a line to get selfies with the man who had changed their program. Taylor will always be a hero on that campus.

But something else happened that day.

Ten years after he shattered every NCAA scoring record, Taylor felt at ease on a basketball court again.