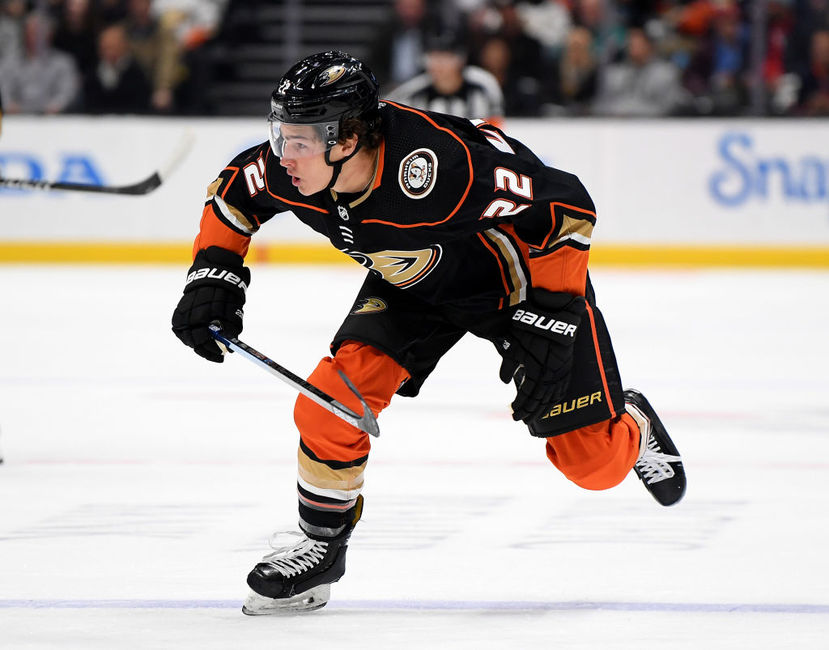 Though most of his recognition around the league came as a result of being the recipient of Trevor Zegras’ highlight-reel assist, Sonny Milano had a reasonably solid 2021-22 season with the Anaheim Ducks. The 2014 first-round selection seemed to finally break through at the NHL level, recording 14 goals and 34 points in 66 outings. Despite this, the Ducks chose not to qualify him, making him an unrestricted free agent.

Three weeks into free agency, Milano remains on the market, and makes for an intriguing add. While known for his offensive skill, the 26-year-old is better than credited for defensively, something the analytics charts can back up. He appears to be a player who still has plenty of untapped potential, and could pop off in the near future if given the opportunity. Here are three teams that make sense for the talented winger.

There are few general managers around the league who value analytics more than Kyle Dubas, making the Toronto Maple Leafs an obvious candidate to give Milano a shot. Not only that, but the Maple Leafs have become notorious for their reclamation projects, and one could argue Milano fits that description perfectly.

There are plenty of different options in terms of lines for Milano to fit in with, as the Leafs boast a ton of talent up front. When given his first real opportunity in the NHL this past season, he proved he could play alongside some serious talent, as he and Zegras spent plenty of time together. That said, he still averaged roughly just 15 minutes in ice time per game last season, making his production seem all the more impressive.

The issue for the Maple Leafs right now when it comes to bringing in Milano is cap space. They sit nearly $1.5 million over the maximum cap right now, and still have to figure out a new deal for restricted free agent (RFA) Rasmus Sandin. That said, there have been a number of players on their current roster who they have been reportedly been considering moving. The most discussed is Alexander Kerfoot, who carries a $3.5 million cap hit. Others are Justin Holl ($2 million) as well as Jake Muzzin ($5.625 million). It would obviously take some work for Dubas, but if he does indeed wish to take a chance on Milano, he has options to do so.

The Detroit Red Wings have improved a ton this offseason thanks to some great free agent signings, and also have some very talented youth on their roster who are only continuing to get better. While they will improve in 2022-23, they will more than likely be on the outside looking in when it comes to the playoff picture, which is why it would make sense to give a player like Milano a chance.

As mentioned, Milano would be a very cheap acquisition, which is exactly why Steve Yzerman may consider bringing him into the fold. Worst case, things don’t work out and the team can walk away from him at season’s end or perhaps even during the 2022-23 campaign. Best case, however, is that he pops off like many believe he can, and he could then be moved at the trade deadline or re-signed and viewed as part of the solution moving forward.

Not only will Milano come cheap, but the Red Wings also have more than enough space to make this happen. While Filip Zadina remains an RFA, Yzerman currently has over $10 million in cap space should he wish to use it.

Despite bringing in some highly talented forwards this offseason in Andre Burakovsky and Oliver Bjorkstrand, the Seattle Kraken could still benefit from adding more skill up front. They are still very much in a rebuilding type of state, meaning they have plenty of time for patience when it comes to working with relatively young and talented players such as Milano.

While the Kraken may not be the most appealing destination for any player at this time given their rather weak roster, Milano isn’t exactly in a position to pick and choose where he signs. Unlike a veteran like Paul Stastny who has offers but is taking his time to find the right fit, Milano likely hasn’t received any contract offers to this point. His resume simply isn’t strong enough for him to afford to say no to any teams reaching out.

On top of that, the Kraken could be a great option for Milano, as he would likely be given an opportunity similar to what he received with the Ducks. A quick glance on CapFriendly shows they currently have just over $1 million in cap space, but that doesn’t yet account for Chris Driedger, as he and his $3.5 million salary will be placed on long-term injured reserve before the 2022-23 season begins.

Milano Will Be Highly Motivated

While it remains to be seen how his production will be in the 2022-23 season, any team bringing Milano in can be guaranteed his motivation level will be extremely high. Not only will he be looking to prove the Ducks wrong for moving on from him, but it is more likely than not that he will be pursuing a deal overseas at this time next year if he doesn’t impress. That motivation alone may be enough to entice a team on this list to give him a shot.