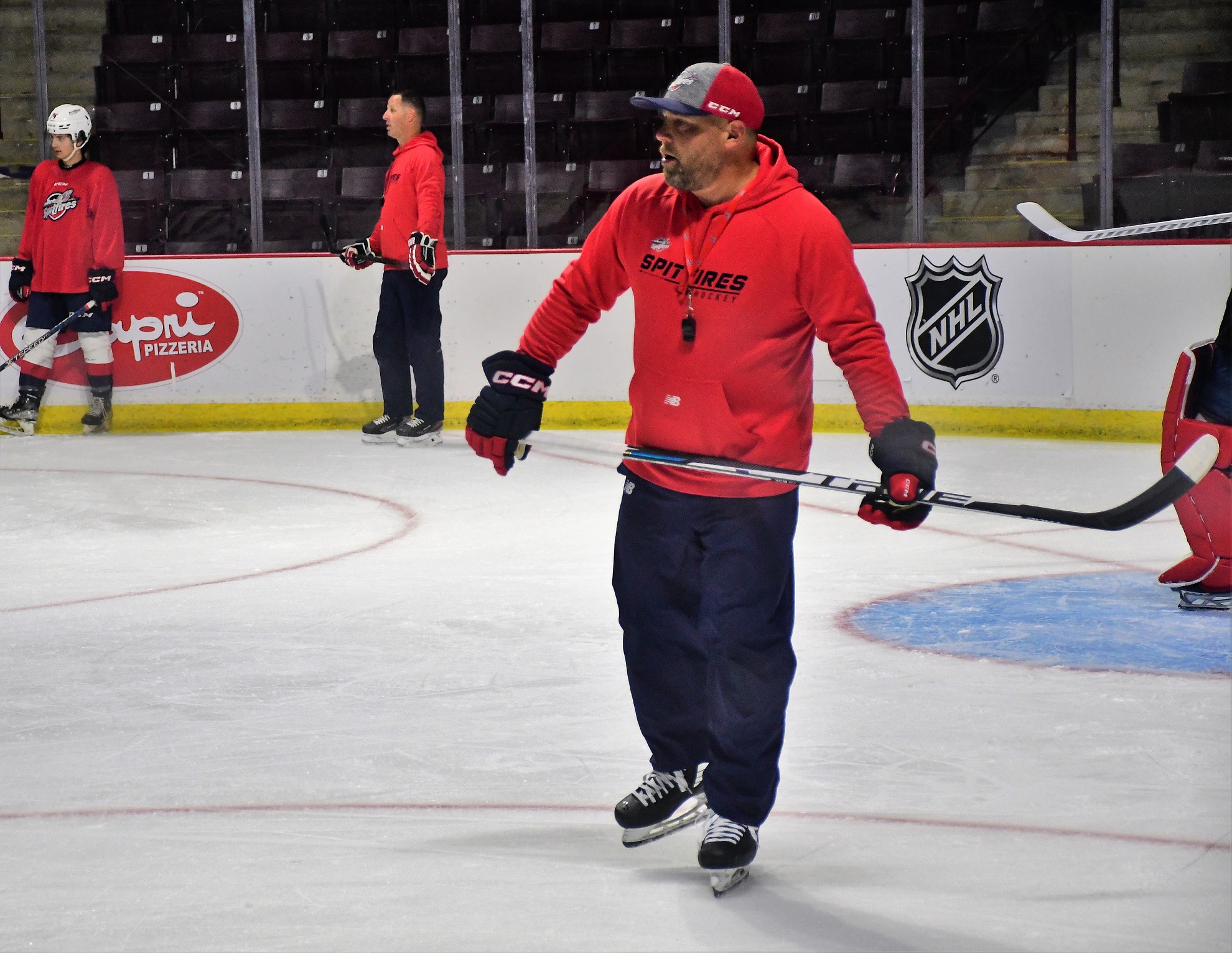 If a piece of technology isn’t working, sometimes the best way to fix it is simply to turn it off and turn it back on. This past weekend, the Windsor Spitfires found out that works for them, too. After a tough stretch that saw their game start slipping, they stopped, regrouped, and made a statement on an important weekend. Now, they head into the final stretch before Christmas with a renewed sense of confidence.

Getting to the top of the Ontario Hockey League’s (OHL) Western Conference was a huge challenge last season. While the Spitfires won the conference title, they found out that staying there this season was just as tough. They have the talent, but staying atop the throne requires much more. After a hot start that saw them climb to seventh in the Canadian Hockey League (CHL) Top-10 rankings, an ugly loss at home to the London Knights started a tailspin that knocked them down the standings. This past weekend was crucial to get their swagger back. Not only did they answer the bell, but they put an exclamation point on it while giving to charity at the same time.

Coming into this weekend, the club was searching for answers after just one point in three games last weekend. It’s unchartered territory for them after being at the top of the Western Conference standings for most of the season. However, they went back to the old adage — keep it simple.

They had an intense week of practice to get back to basics. They refocused, reset, and kept the game simple. After Thursday’s game, head coach Marc Savard said the club emphasized just doing your job.

“When times get tough, it’s just natural that you want to do more,” he said.

“That hurts you. You hold onto pucks longer, you try to do someone else’s job in the zone. Tonight, even if a guy got beat off the wall, we were in the right position to be there and back him up because we’re not trying to do more.”

Spitfires’ rookie forward Noah Morneau echoed Savard’s comments on Saturday. The club’s 2020 15th-rounder made the team out of hard work and determination. He said, in this league, you can’t take anything for granted.

“I think we just knew what we wanted to do and worked so hard in practice,” he said.

“We had a really good week of practice … We all want to turn this thing around and, if we come together as a team, we can … You can’t take anything for granted in this league. There isn’t a bad team or bad player. You see other guys work hard, and it pushes you to work hard. You keep getting better and better, and it’s a great environment here that we’ve got. It makes me want to get better.”

When things are going poorly, reset and refocus. Sometimes the simplest ways are the easiest.

Hockey can be a very serious, focused game at times. Players and coaches spend hundreds of hours analyzing every little detail in hopes of giving themselves a competitive edge. That’s why the annual Teddy Bear Toss game is so big; it’s a little bit of a relief for everyone.

Each season, junior and minor hockey league teams hold their annual Teddy Bear Toss game just before Christmas. Fans are encouraged to bring a new stuffed animal to the game, and when the home team scores their first goal, the toys are tossed onto the ice and collected for local children’s charities. It’s a game that’s often circled on the calendar.

Last season, then-Spitfires’ forward Pasquale Zito scored the Teddy Goal. This season, with the Colts in town, it was the hometown youngster Morneau who did the deed. As a 15th-round pick, he made the roster out of hard work and determination, and his third goal of the season was the big one.

After the game, Morneau told the Windsor Star’s Jim Parker that it was like scoring the overtime winner.

“There are a lot of people in the league who want to score that goal,” he said.

“It’s pretty cool … It’s almost like overtime where, when you score a goal, everyone comes out on the ice. It’s just different because you look around, and there are teddy bears flying everywhere.”

Morneau said he took a couple of pictures with the teddy bears, as did the team as a whole. After a tough week, both mentally and physically, it was a great chance for the players to let loose for a few minutes and soak in the moment. Altogether, the team collected 3,972 teddy bears for Sparky’s Toy Drive, which has been a local icon for over 30 years.

One of the bright lights has been the play of the Spitfires’ rookies. Their 2022 second-round pick forward, Liam Greentree, has been given a golden opportunity, and he’s not taking it for granted. After mostly fourth-line minutes, Savard gave him a shot on the top line last month with captain Matthew Maggio (New York Islanders) and forward Ryan Abraham.

On Thursday night, with Abraham injured, Savard kept the youngster on the line, adding veteran Jacob Maillet instead. Greentree scored the opening two goals and then added two assists on Friday against the Rangers. It’s an opportunity he’s not taking for granted.

“The first couple of games, I was a little pressured, but now I’m getting a little more comfortable, and I’m starting to get to know the guys a little better,” Greentree said after Thursday’s game.

“I’m creating a good bond with (Maillet), especially because he’s my billet brother. Maggio is a wonderful player to play with … I know I don’t have to do too much, so that takes the pressure off a little bit.”

Giving a rookie an opportunity to show his game can be a balancing act for a coach. You don’t want to put him in the wrong situation. Savard said that Greentree deserved a chance and works well with Maggio.

“Greentree makes plays and passes well, which I think helps Maggio,” he said.

“… It’s a good mix; I’ve liked Greentree’s game all season. When we have a full roster, you want to work him in slowly, but he stepped up tonight, and hopefully he gets some confidence from this and keeps rolling.”

The Spitfires now take their six-point weekend momentum and get ready for another three-in-three weekend starting Thursday at home against the OHL’s top-rated Ottawa 67’s.

There is one scary piece of news with the club, however. At practice on Monday afternoon, assistant coach Andy Delmore suffered a medical emergency. The arena and team medical staff were there to assist immediately, and he was taken to a local hospital for treatment.

Soon after, both general manager Bill Bowler and Delmore himself gave updates on the situation:

Our thoughts are with Delmore, his family, and the Spitfires’ organization.