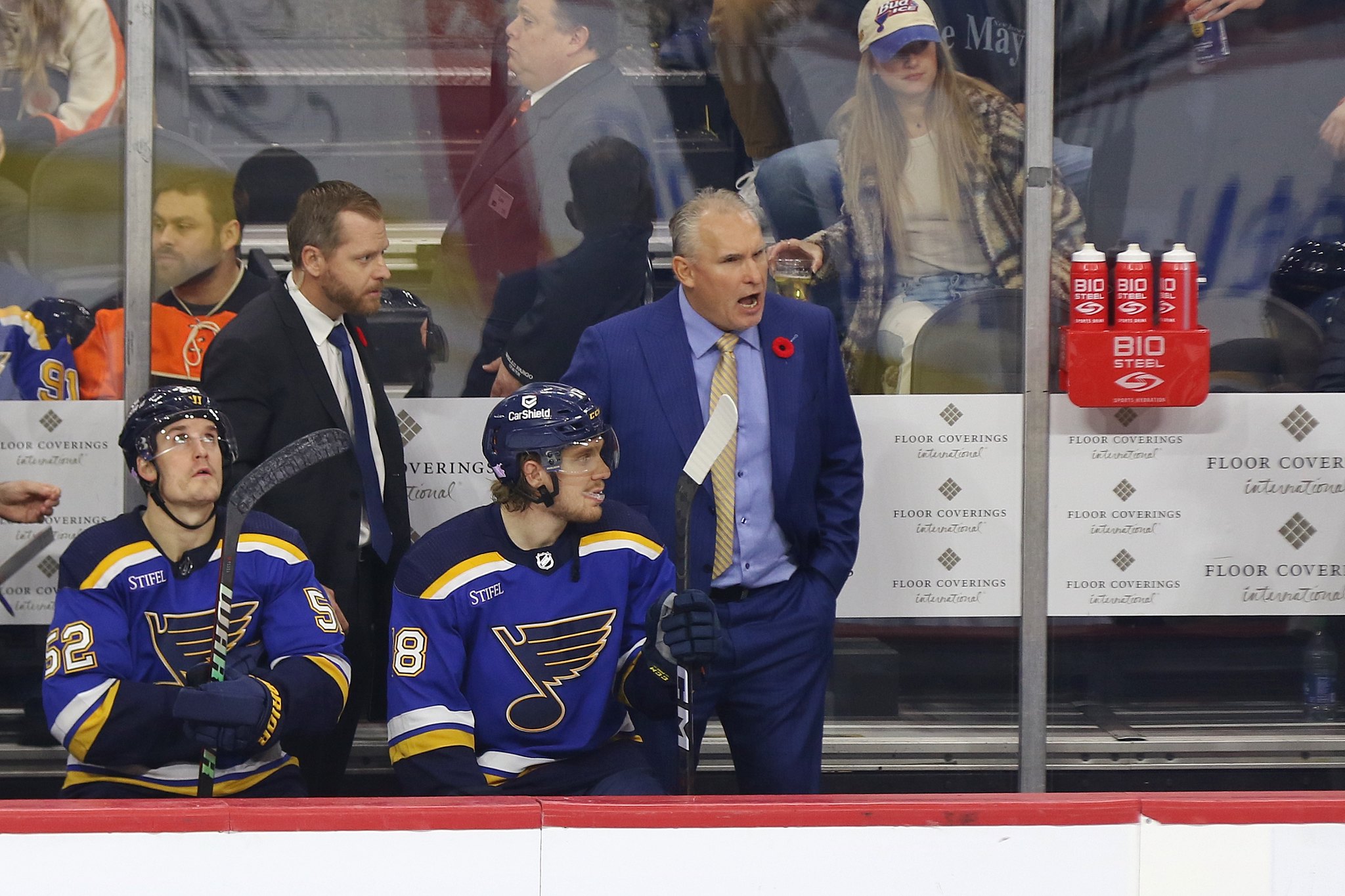 It is that wonderful time of year in the United States when we gather together and give thanks for what we have been fortunate to receive over the last year. To look back on what has happened and find the good in what may even be the darkest of areas. Let’s look at the St. Louis Blues franchise and see what there is to be thankful for.

Be Thankful for Blues’ Leadership Group

To say that the Blues have been tested early on would be an understatement. After starting the season 3-0, they went on a historic eight-game losing streak, the longest in franchise history. The coaching staff continued to preach resilience and patience with an emphasis on grit and determination. While they seemed at a loss during the losing streak, the coaching staff believed in their team and never once turned on one another. They were provided with a reality check from Blues general manager Doug Armstong regarding team expectations and the state of the team. He reiterated that the performance and efforts were not even close to being good enough and the team was not playing to their potential. Blues general manager Doug Armstrong said:

The coaching staff and upper management never gave up on the squad, continuing to press their players in what could be looked back on as an early turning point of the season. It will be the coaching staff and management’s job to continue to define and evolve their team when adversity strikes again in hopes of reaching the postseason once more.

Be Thankful for Binnington & Greiss

This season has been a rollercoaster of emotions for the fans and players. While the defense has struggled in their own zone and oftentimes looked lost during the eight-game losing streak, it was the goaltending that kept the team alive and provided a fighting chance. Entering into the year, there were mixed emotions on the loss of goaltender Ville Husso to the Detroit Red Wings, and relying upon Jordan Binnington who struggled to find consistent success since his 2018-19 Stanley Cup run. Over the past three seasons, he has amassed a 2.75 goals-against average (GAA) and a .908 save percentage (SV%). This year, he has found his groove once more and asserted himself as one of the top goaltenders in the NHL with a 2.76 GAA and .912 SV%.

Binnington’s counterpart, Thomas Greiss, has also come into St. Louis and rewarded his team with stellar play at times, reinforcing the decision made by management to bring him in as a backup. While he has not amassed the record that he deserved, Greiss’ performance this season, like Binnington’s, has provided his team a fighting chance in each game. Greiss’s abilities were tested immediately during his first game as he set a franchise record for the most saves by a Blues goaltender in a debut with the team (39). With his team performing better in front of him, his 3.76 GAA and .906 SV% should improve as the season progresses.

Be Thankful for Blues’ Positional Depth

With the teams falling victim to injuries and top players failing to produce consistently this year, the Blues have been fortunate to have multiple impactful depth players on their roster. Before the season started, defensemen Marco Scandella and Scott Perunovich were added to the injured reserve list and sidelined for six months, making way for players like Niko Mikkola, Calle Rosen, and most recently, Tyler Tucker. The team has proven they have multiple defensive prospects that can come up to their NHL squad and make an impact on a nightly basis. With their combined efforts this season, they have a collective five points and a plus-13 rating, with four points coming from Rosen.

While their internal depth has proven beneficial, their offseason forward additions have performed well above expectations this season. Forwards Noel Acciari, Josh Leivo, and Tyler Pitlick have become key components to the Blues’ lineup this season being shuffled from the top to the fourth line and played in all situations for the team. While the trio has each contributed in different ways, Acciari has been one of the most impactful for the Blues. Of his performance this season, Berube said:

“He’s been everything we expected. He’s played extremely hard every night. He’s a physical player; he does a good job defensively (and) penalty-killing. He’s chipped one goal, but he’s had plenty of opportunities” (from ‘Craig Berube calls Noel Acciari ‘everything we expected,’ moves him up Blues’ depth chart,’ STLToday.com, Nov. 1, 2022).

Blues fans have plenty to be thankful for this season. There have been ups and downs, but the future remains bright in St. Louis. The team may experience a small setback in the coming seasons with several contractual obligations to adhere to that will likely require one or more of their core players to be moved out. In the meantime, the club continues its push for a second Stanley Cup and a top 10 team in the NHL, and for that, fans should be thankful.

Mike is a writer for The Hockey Writers and covers the St. Louis Blues since November of 2021. He has a keen love for statistical analysis, prospects, signings, and trades. Follow Mike on Twitter for further Blues or Central division hockey discussions, interview requests, or to provide content info.