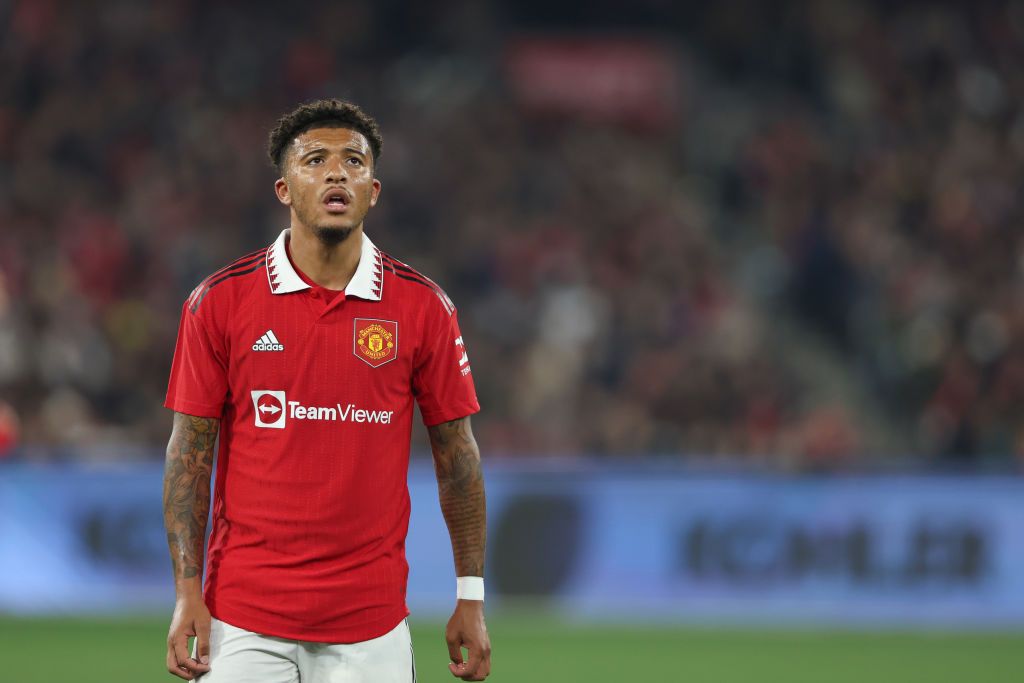 It didn’t all click immediately for Manchester United last season. Hardly anyone hit the ground running and poor Jadon Sancho often seemed a shell of his Dortmund self.

He wasn’t the only one, of course. But as the biggest outlay in a summer in which Raphael Varane and Cristiano Ronaldo also joined, it was pretty obvious that he wasn’t himself. Sometimes players just need some time. It might take a year to get to speed.

Evra unquestionably became one of Sir Alex Ferguson’s finest signings when Manchester United paid £5.5m to recruit him from Monaco in 2006. He may have been past his peak by the time of his 2014 departure, but for several seasons the Frenchman was widely regarded as one of the world’s leading left-backs.

It wasn’t until the 2006/07 campaign when that became the case. A traumatic debut in a derby defeat by Manchester City, when Evra was repeatedly exposed as United lost 3-1, shattered whatever belief he may have had upon his arrival. He’d gone from playing in front of home crowds of 7,000 to around 76,000, and his form was so disappointing that he was dropped ahead of a fixture with Liverpool and missed out on the 2006 World Cup. Mikael Silvestre was recalled at full-back after several seasons playing in central defence.

During the following season, that all changed. Ahead of Gabriel Heinze, John O’Shea and Silvestre, Evra deservedly established himself as Ferguson’s first-choice left-back and even outlasted the manager, eventually departing for Serie A behemoths Juventus.

Essien became Chelsea’s club-record signing – in an already free-spending era – when he joined them from Lyon in 2005 for £24.4m. But the form that made him one of the world’s finest midfielders in the late 2000s wasn’t displayed during at least his first 12 months at Stamford Bridge.

To accommodate Essien, Mourinho dropped the fluid Eidur Gudjohnsen from a robust team. The quality of Chelsea’s football (if not the results) also suffered when, with Frank Lampard and Claude Makelele still at their peak, there was little need for another box-to-box midfielder. Michael Ballack’s arrival the following summer appeared to put Essien’s place at greater risk, but the Ghanaian responded with consistently exceptional form thereafter and became arguably Chelsea’s most important player until two serious knee injuries forced a premature decline.

That West Ham lost eight and drew one of their first nine fixtures following the joint arrivals of Mascherano and Carlos Tevez in August 2006 says much about the midfielder’s time at the club. He became an elite player, but in London the Argentine made just seven appearances when Nigel Reo-Coker and Hayden Mullins were preferred.

The fact of the matter is, however, that Mascherano simply didn’t impress at Upton Park. Had he done so, such a struggling team (they avoided relegation on the final day of the season) wouldn’t have been able to drop him.

INTERVIEW Javier Mascherano exclusive: I regret the way I left Liverpool – but I mean it when I say I’m a supporter

West Ham made little attempt to retain the Argentine when he joined Liverpool later that season and, alongside Steven Gerrard and Xabi Alonso, his form improved. He gradually became a significant figure at Anfield, but for those first few months his best football came in the Champions League – only during the following season did he consistently impress domestically. Thereafter, until his 2010 transfer to Barcelona, he was the finest defensive midfielder in England.

“In a football club like this you need time to adapt,” Mascherano said at the time. “Maybe the first year is just about getting to know it… It’s not right for a player to spend just a year in one country.”

Boateng may have been on Daniel Levy’s mind when he sacked Harry Redknapp as Tottenham manager in 2012. The Spurs chief perhaps reflected that, having inherited the powerful midfielder upon his appointment in 2008, Redknapp opted to loan him to Bundesliga outfit Borussia Dortmund at the start of his second season before eventually selling him to Portsmouth in 2009 for only £4m.

Having made minimal impact in his first year in England at White Hart Lane, Boateng was by some distance the most impressive player in his second at Fratton Park – in a team that appeared almost certain for relegation before their opening league fixture. He added true quality to an otherwise-workmanlike team and, but for tearing his ankle ligaments, could have improved on his record of five goals in 25 starts. Portsmouth’s financial difficulties (they were deducted nine points for entering administration) meant rescuing them was beyond him.

After impressing for Ghana at the 2010 World Cup, Boateng joined Milan that summer via Genoa. That he couldn’t fulfil his undoubted potential is a reflection of his application, not his ability or suitability to a particular football culture. After all, Barcelona were happy to sign him on loan in January 2019.

It hardly helped Pires that he was seen as the successor to Marc Overmars when he arrived at Arsenal for only £5.3m shortly after Euro 2000, but he also didn’t help himself by saying: “I would have preferred to have played for Real Madrid, but the words of [Arsene] Wenger gave me more security” and later complaining about English football’s physicality.

Pires found his first year in England difficult and, amid the occasional flashes of excellence he later demonstrated regularly, he performed rather inconsistently during Arsenal’s unsuccessful 2000/01 season.

His improvement for the following season was so vast, however, that for a period he was considered almost as important to the club as Patrick Vieira and Thierry Henry and was named the Football Writers’ Player of the Year for inspiring Arsenal to the 2002 Premier League and FA Cup – despite his season-ending in March with a cruciate ligament injury. Thereafter, Pires remained a consistently graceful presence until his departure in 2006.

De Gea, after proving himself a suitable successor to Edwin van der Sar, has become an outstanding keeper. Those who hadn’t witnessed his potential at Atletico Madrid before joining United in 2011, however, simply couldn’t see what it was that persuaded Alex Ferguson to pay £18.3m for him.

Several factors combined to undermine De Gea’s introduction to English football: a notoriously slight physique, the collective decline of Rio Ferdinand, Nemanja Vidic and Patrice Evra, no previous experience of English football and the imposing challenge of being the goalkeeper of such a dominant team.

In early 2013, with the Spaniard yet to convince, United were repeatedly being linked with Asmir Begovic until a daunting Champions League trip to the Bernabeu in February proved his making. De Gea responded to significant pressure from Madrid to earn United a 1-1 draw that would have otherwise been well beyond them, and since then has consistently been one of the world’s finest goalkeepers.