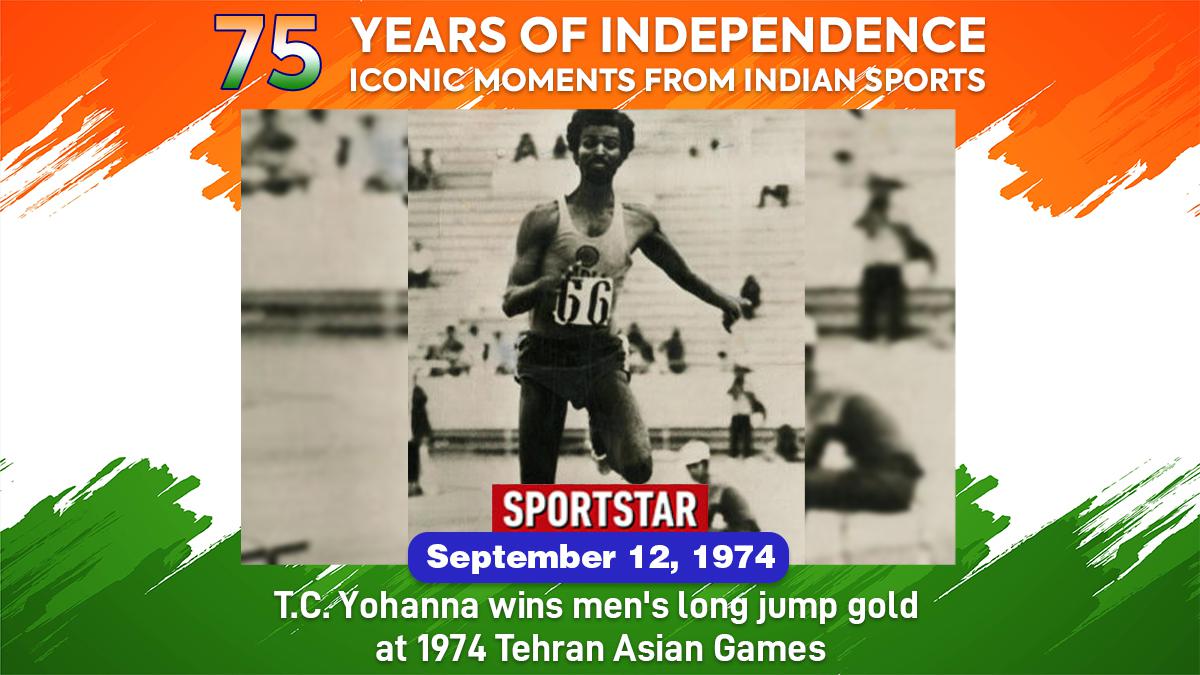 T.C. Yohannan, India’s then long jump champion, wrote himself into the Asian Games record book with a magnificent leap of 8.07m to clinch the gold medal in Tehran on September 12, 1974.

As a little boy, Yohannan fell into a canal near his home at Marranad, in Kollam, while attempting to cross it one day. He went home to clean up the mess but his father was not happy. He took his son to the canal again and offered a small reward, a glass of lemon juice, if he jumped over it. He did. Thus began Yohannan’s fascination for the jumps.

A few years later, around 19, he moved to Bhilai to join his brothers and to study mechanical engineering. That decision changed his life. When the wiry Kerala youngster won the long jump and triple jump golds at the Prasanna Kumar All-India Meet in Bangalore, job offers poured in from many companies, including Telco, Tisco and Railways. “My brother advised me to join Telco and so I did. That was the best decision I made in my life. Telco transformed my life completely, helping me in every stage of my career. Had I stayed back in Kerala, I don’t think all those wonderful things would have happened,” says Yohannan.

With bright young men like Suresh Babu and Reghunathan, Telco had a lot of top athletes those days. And the Tata Sports Meet, which was held in Bombay those days, was a big affair. “We loved this meet for it gave us a chance to see Bombay,” he remembers.

Foreign coaches and scientific inputs go into the making of top Indian athletes these days. But the moulding of Yohannan was almost crude. “Our athletic coach at Telco, Suresh Gujrati, was not a qualified coach but he was very creative in his techniques and passionate about his work.

Gaining good height during the flight stage helps long jumpers. Gujrati used to do a strange thing. He kept low hurdles towards the end of the runway to help us go high. That, I think, really helped my performance.”

“I used to throw my hip forward at the end of the jump. That gave me almost an extra feet,” explains Yohannan as he shows the photo sequence of his gold medal jump. That jump broke the Asian record and stood as an Indian record for 30 years.

(The article was first published in Sportstar on February 4, 2006)