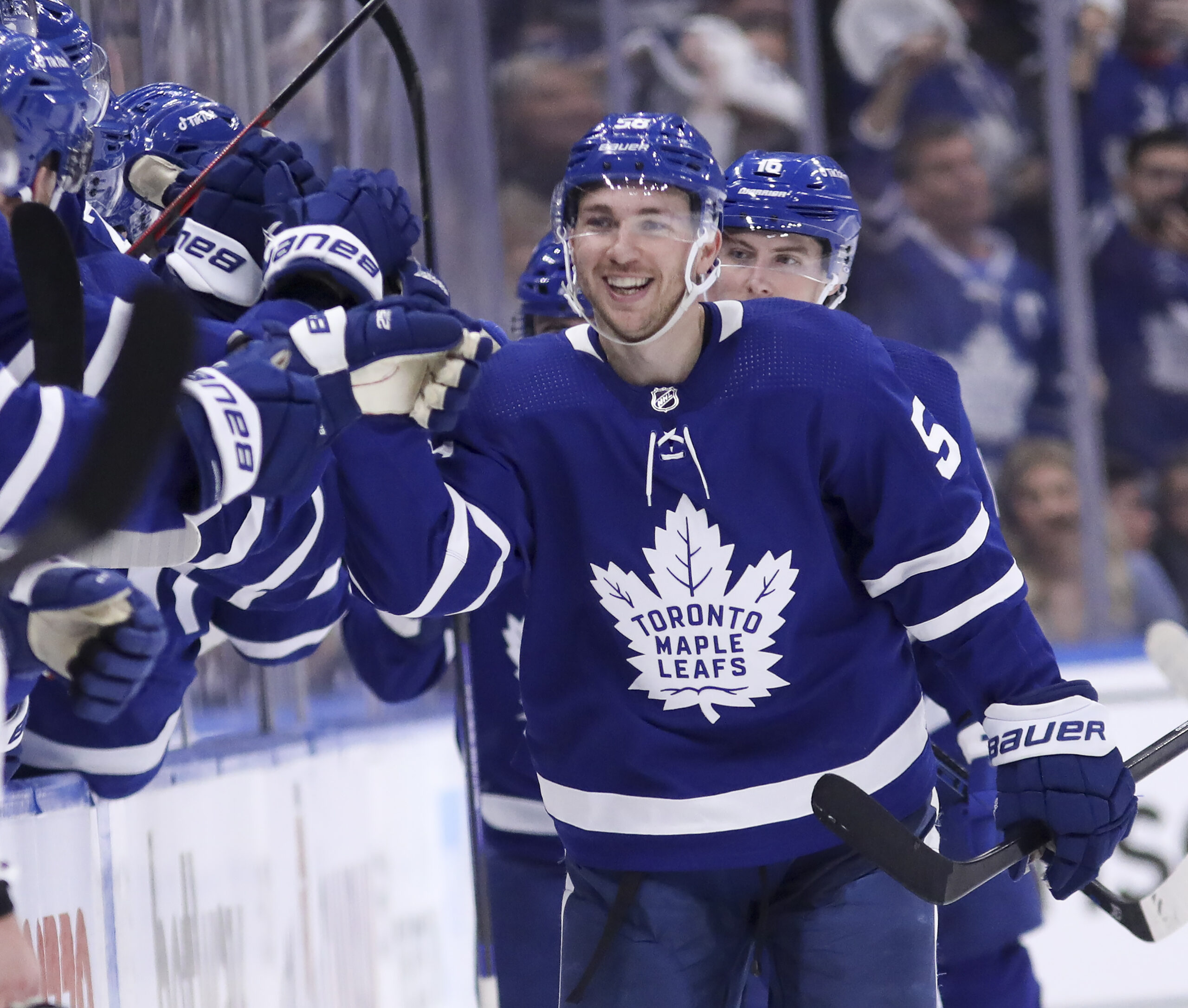 In this edition of Toronto Maple Leafs’ News & Rumors, I’ll share news about three young players who signed one-year contracts with the Maple Leafs’ affiliate Toronto Marlies yesterday. Each of these youngsters is an un-drafted forward who’s a bit older and who has risen slowly through the ranks.

Related: Maple Leafs’ Bunting Should Be a Calder Trophy Candidate

It’s interesting to see how the organization’s scouting staff is working to find these young(ish) players and sign them to professional contracts. Each of the three forwards signed a one-year AHL contract. The young players are Orrin Centazzo, Marc Johnstone, and Keenan Suthers.

The 5-foot-8, 163-pound Centazzo has an interesting history. He was un-drafted and played six seasons in junior hockey. Each season he became a bit more prolific as a scorer. In 2017-18 he only scored six goals and five assists (for 11 points) in 40 games with the Everett Silvertips. By his 2019-20 junior season with the Kamloops Blazers, he was up to 44 goals and 37 assists (for 81 points) in 63 games.

The 22-year-old Centazzo kept that pace up last seasons with the Marlies ECHL affiliate Newfoundland Growlers, where he scored 28 goals and adding 23 assists (for a point-a-game pace of 51 points) in 51 games. That placed him fourth overall in goals among ECHL rookies. He also produced in the playoffs, putting up eight goals and seven assists) in 18 games. (As an aside, Centazzo’s from Marwayne, Alberta, a tiny village in eastern Alberta that I know quite well.)

Moving from small to large, the Marlies also signed Keenan Suthers. Suthers is exactly a foot taller than Centazzo, standing 6-foot-8 and weighing 245 pounds. Although The 24-year-old, left-winger was born in Tecumseh, Ontario, (just east of Windsor) he’s a dual-citizen and played with both the US Under-18 and US Under-17 national teams. After playing a season in the USHL, he spent three seasons at St. Lawrence University in upstate New York (just south of Ottawa), he spent last season at the University of Maine.

Related: Two of the Cheapest NHL Trades Ever

At the University of Maine, Suthers scored five goals and added eight assists (for 13 points) in 30 games. He’ll attempt to make an impact at the AHL level in his first professional season. At the NCAA level, he played 127 games and scored 21 goals and added 26 assists (for 47 points). His size and athleticism make him an interesting project for the organization’s coaches.

Suthers’ background suggests that he’s a gifted athlete. At Pioneer High School in Ann Arbor, Michigan, he played four sports very well. He was also captain and MVP of the basketball, hockey, and volleyball teams. By the way, he was an honor-roll student.

Marc Johnstone is a 26-year-old forward who played 58 games with the Growlers last season (scoring seven goals and adding 14 assists for 21 points) before he moved up to the Marlies to play four games. He played four seasons at Sacred Heart University in Connecticut, where he registered 95 points in 126 regular-season games.

The 6-foot, 180-pound Johnstone is a native of Cranford, New Jersey. In 19 ECHL postseason games, he scored four goals and four assists (for eight points). Johnstone also played four games with the Marlies at the end of last season. He obviously impressed the right people.

These Youngsters Are Long-Shots to Make the Maple Leafs’ Roster

Seldom do players with this history ever make it to the NHL. That said, the Blue and White have suited up a number of un-drafted players over the seasons. Not the least of which is defenseman Mark Giordano. Borje Salming was also un-drafted. The list also includes goalies Ed Belfour and Curtis Joseph as well as forward Steve Thomas.

You don’t hang in there as long as these young players did without having a burning dream that one day they’ll suit up for an NHL roster and that they have the talent to do so. I so enjoy watching youngsters like these fight hard to make the prime time. That’s why players such as Michael Bunting become favorites.

It’s hard work to persevere as long as they have. My congratulations to these three for signing their first professional contracts.