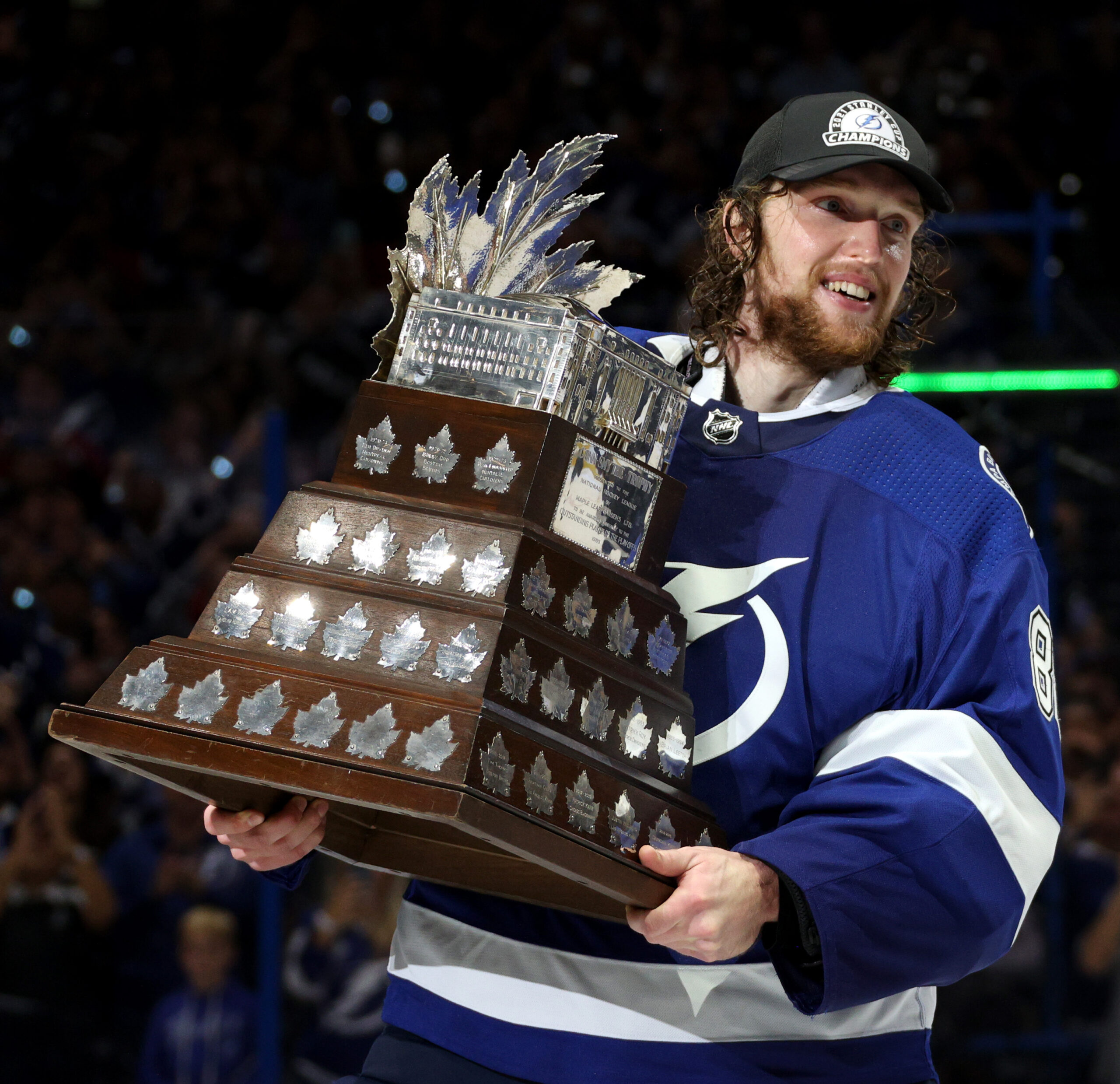 Andrei Vasilevskiy has done a lot in five short years as the starting goaltender for the Tampa Bay Lightning. Aside from the team’s success throughout his tenure, he’s emerged as one of the top netminders of his generation. On Monday, he celebrated his 28th birthday, and the ‘Big Cat’ is far from writing the end of his historic career.

A first-round pick in the 2012 NHL Draft, expectations were high from the start for the Russian goaltender. As just the third Russian goalie to be selected in the first round, at 19th overall, he was the highest-drafted Russian-born goaltender at the time. Yaroslav Askarov stole that title from him in 2020 after being drafted 12th overall by the Nashville Predators, but he feels the pressure to live up to the high expectations set by Vasilevskiy.

Vasilevskiy spent two seasons following his draft year playing in his home country, first with the Tolpar Ufa of the Molodyozhnaya Hokkeinaya Liga (MHL), then professionally with the Ufa Salvavat Yulayev of the Kontinental Hockey League (KHL). In just 36 regular-season games in the KHL, he put up an impressive .9235 save percentage (SV%) and 2.215 goals-against average (GAA). His play was good enough for the Lightning to bring him over to North America for the 2014-15 season, where he played 16 games as a 20-year-old. He spent another season primarily serving as Ben Bishop’s backup, but in 2017, the team committed to him as their starter of the future, trading Bishop to the LA Kings for a fourth-round pick.

Since taking over the net, Vasilevskiy has contended for every major goaltending award; he’s played in two All-Star games and won a Vezina Trophy, a Conn Smythe, and two Stanley Cups. His stats are equally impressive. He has a 2.50 GAA and a .919 SV% in his career, along with a 229-101-24 record. He is at or near the top of the list amongst his peers, but where does he rank among the all-time goaltending greats?

Among current goalies, Carey Price, Marc-Andre Fleury, and Jonathan Quick are the only ones with comparable resumes at this point. Aside from Quick, they’ve all won a Vezina Trophy, and aside from Price, they’ve all won multiple Stanley Cups. While Quick is the only other one to win the Conn Smythe Award, all four have been nominated for multiple All-Star games. Despite being much younger, Vasilevskiy has won enough awards to be compared to the all-time greats.

However, he has plenty of work to do to come close to any of those names at the top who have many Vezina wins and Cups attached to their resume. For instance, Jacques Plante won the Stanley Cup six times and the Vezina seven times in his career. More recently, Dominik Hasek won six Vezina Trophies and two Stanley Cups. Hasek also won the Hart Trophy as the league’s most valuable player twice in his career.

Related: Lightning’s Vasilevskiy is Conn Smythe Favorite Through Round 2

The best goaltenders of all time are generally considered to be Plante, Hasek, Martin Brodeur, Patrick Roy, Glenn Hall, Ken Dryden, and Grant Fuhr. All of them have won multiple awards and championships and rank near the top of most major statistical categories for goaltenders.

Vasilevskiy ranks 35th in career GAA and 8th in career SV% all-time, outranking many legends in those categories. However, sustaining those numbers will be the biggest issue in cementing his legacy. At 28, he’s still young for a modern goaltender. Many in today’s game play at a high level well into their late 30s. Quick, Fleury, Mike Smith, and Cam Talbot all played at a respectable level despite being in their mid-to-late thirties this past season.

With minimal injuries in his career, it’s not unreasonable to think that Vasilevskiy will play into his late thirties, even if keeping this stat line is only going to get harder as he ages, although it’s hard to imagine that he will lose his game as long as the Lightning remain a Stanley Cup contender. But the team’s aging core might affect his numbers in the future; some of the best statistical seasons from goaltenders come when the team in front of them is just as excellent. However, in the short term, expect Vasilevskiy to continue to climb up the all-time ranks.

Where Vasilevskiy Will Rank When it’s All Said and Done?

I would rank Vasilevskiy among the top 25 goaltenders of all time. But to continue to climb those ranks he needs to, first, win the Vezina again. While it’s harder than ever to win the award given the elite goaltenders in the game today, most of the all-time greats won the award multiple times in their career. Hasek, Plante, Brodeur, Roy, and Dryden all have more than one Vezina to their name.

Competing for more Cups, while not completely in his control, will also secure his legacy; winning championships has always been a measure in determining a player’s place in history. If the Lightning can squeeze one more championship out of their current window, it would only benefit their netminder’s resume. Only Roy, Plante, Dryden, and Fuhr have more than three Cup wins. Also, another Conn Smythe would also put him in rare territory, as only two other goalies have won the award more than once.

In short, the success that the current core has over the next couple of years in Tampa Bay could have a lasting impact on Vasilevskiy. If he can maintain his elite level of play, it’s not unreasonable to say he’ll go down as the best goaltender of his generation and will be mentioned among the greats as a result. As the awards start to pile up, so will his rank amongst the all-time best. In the short-term, Lightning fans will get a front row seat to watch him continue to make history.

Law student, who loves all thing sports. Connor is a former college athlete who understands sports from a players perspective. Based out of Detroit, fell in love with hockey by going to the old Joe Louis Arena watching those legendary 2000s Red Wing teams. Connor will talk to anyone who will listen on player performance, draft prospects, and front office management around the NHL. In his free time he loves to golf, although his scorecard may tell you otherwise. Covering all things Tampa Bay Lightning.