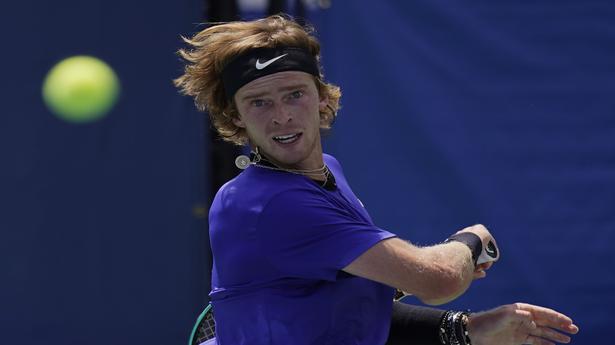 Top seed Andrey Rublev won twice on Friday to reach the semifinals of the ATP and WTA Washington Open, dispatching Americans Maxime Cressy and J. J. Wolf at the US Open tune-up. World No. 8 Rublev defeated 32nd-ranked Cressy 6-4, 7-6 (10/8) in one hour and 42 minutes before eliminating 99th-ranked wildcard Wolf 6-2, 6-3 in 78 minutes.

“I didn’t spend much time on court,” Rublev said of his three-hour total. “That was the main key today.”

Rain on Thursday night forced double duty upon Rublev and several others but Friday storms provided everyone a timely rest break between matches. Rublev, whose only other two-win day was at Washington in 2018, rolled through the first set against Wolf in 28 minutes, then broke to lead 2-1 and cruised from there.

Wimbledon runner-up Nick Kyrgios fired 35 aces on his way to beating hometown hero Frances Tiafoe 6-7 (5/7), 7-6 (14/12), 6-2 and reaching the other semifinal against Sweden’s 115th-ranked Mikael Ymer. Nishioka improved to 5-0 all-time against the 40th-ranked Englishman in the rain-interrupted affair to reach his first ATP semifinal since 2020 at Delray Beach. His only ATP title came at Shenzhen in 2018.

“I never gave up and that’s the way I think I won,” Nishioka said. “I just focused on making a lot of balls and to play long rallies. I knew he didn’t want to because he was getting tired.”

Rebecca Marino reaches for a return during a match against Daria Saville.
| Photo Credit: AP

Rublev seeks his 12th career crown and fourth title of the season after Marseille, Dubai and Belgrade to match Spaniards Rafael Nadal and Carlos Alcaraz for the most ATP trophies this year. Australia’s 63rd-ranked Kyrgios, who won the most recent of his six ATP titles at Washington in 2019, needed only 14 minutes to complete an early win over US fourth seed Reilly Opelka 7-6 (7/1), 6-2.

Kyrgios then outlasted 27th-ranked Tiafoe after two and a half hours, yelling, “I want to go to bed,” in the third set of a match that ended at 1 in the morning. Tiafoe won the last five points of the first-set tiebreaker, the last on his sixth ace, and had four match points in the second-set tiebreaker. But Kyrgios answered with an ace, backhand winner, forehand volley winner and service return winner and forced a third set when Tiafor sent a forehand long.

Tiafoe, who won a third set earlier to defeat Dutch eighth seed Botic van de Zandschulp, hit a crosscourt forehand wide to hand Kyrgios a break to open the third set and missed a backhand to drop a break in the seventh before Kyrgios held to advance.

The Aussie hit 60 winners and saved five match points in all.