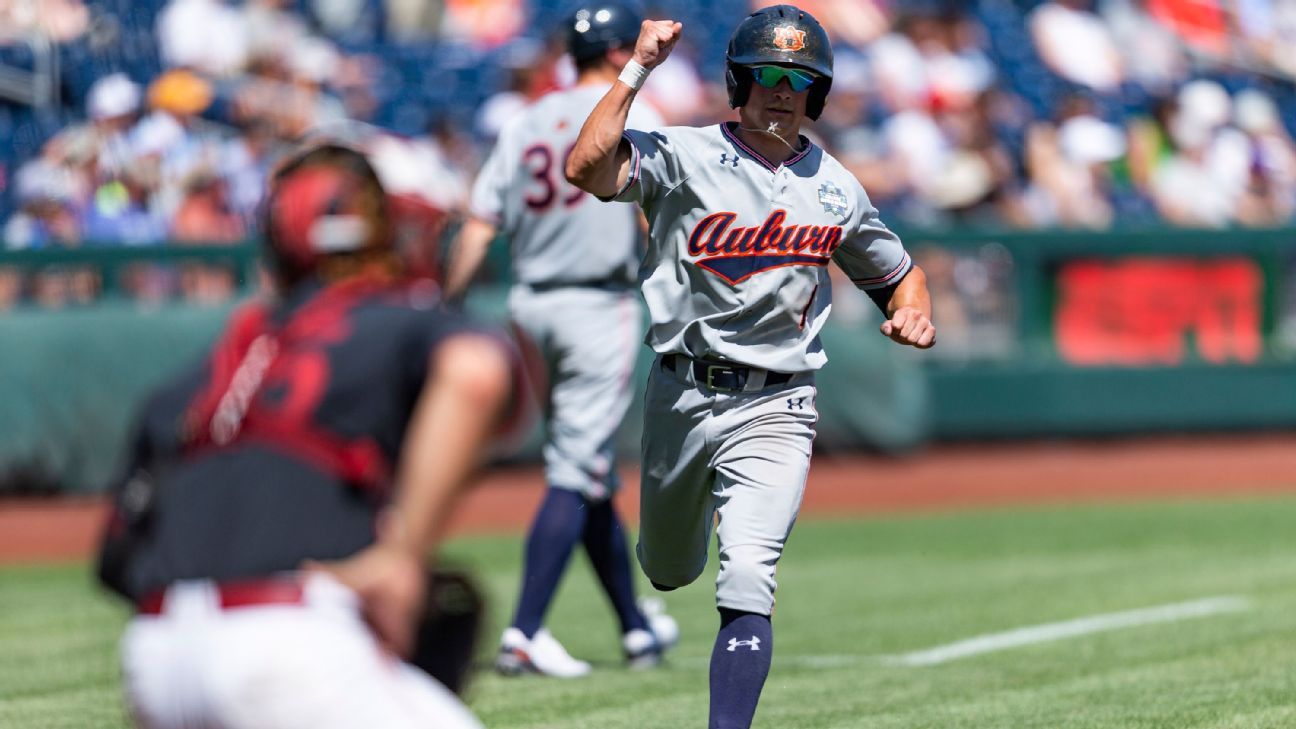 OMAHA, Neb. — With a stomach bug and nearly seven decades of history working against them, the Auburn Tigers were down to two options Monday when they fell behind to No. 2 Stanford at the Men’s College World Series. Attack or go home.

“My job is to (help) a group of players and coaches to leave with no regrets,” Tigers coach Butch Thompson said after his team rallied for a 6-2 win, its first MCWS victory in 25 years. “Just let it hang out. What are we going to do, screw something up or make a mistake? I want them to attack as much as they can.”

Stanford was the highest seed in the MCWS field, and had never, in 17 previous trips to the MCWS dating back to 1953, left Omaha without a victory. But they were sent home 0-2 Monday after Cole Foster smacked a three-run double in the sixth inning to put Auburn into Tuesday’s elimination game against the winner of Monday night’s Ole Miss-Arkansas game.

After possibly the biggest hit of his life, Foster, according to Thompson, barely pulled into second base because he was so ill. Foster did not appear in the postgame news conference because he was supposed to receive IV fluids after the game, Thompson said.

Foster had left in the fourth inning of Saturday’s game against Ole Miss, a 5-1 loss, because of illness. In a pregame interview with Andy Burcham, the voice of the Auburn Tigers, Thompson said that he had “seven or eight guys on the toilet too much and not feeling well from a tough week.” But he didn’t want to make any excuses.

Thompson confirmed with ESPN late Monday that the Tigers were dealing with a stomach bug.

But sitting in his hotel room Sunday night, Thompson seemed more preoccupied with history. He knew that only four teams have won a national championship after losing the first game in the past four decades, so he reached out to two coaches from those teams: Oregon State’s Pat Casey (2006 and 2018) and South Carolina’s Ray Tanner (2010).

He asked them to take him through the journeys of those teams. Tanner, reached by phone Monday night, said he exchanged texts with Thompson around 9 p.m. ET Sunday. Tanner told him that baseball is a game of failure, but you can’t be afraid to fail. You can’t wait for something to happen; you’ve got to make it happen.

Auburn came out as the aggressor in the fifth inning Monday, down 2-0. It didn’t get them anything; the Tigers tried a double steal, but Foster was caught in a rundown between third and home.

But the next inning, they struck big. Back-to-back singles, a hit batsman and a walk gave Auburn its first run in the sixth. Then Foster cleared the bases with his double off the center-field wall.

“They got down,” Tanner said. “But they were pushing buttons and making moves.”

Auburn added two more runs in the seventh on doubles from Blake Rambusch and Bobby Peirce. Stanford’s last real chance to rally came in the bottom of the seventh when the Cardinal loaded the bases, and Blake Burkhalter was summoned from the Auburn bullpen.

Burkhalter struck out Brett Barrera, Stanford’s leading hitter, on a cutter to end the rally.

“You know the bases are loaded, but you have to flush it,” said Burkhalter, who struck out five and allowed just one hit in the final 2 1/3 innings.

“I don’t think I had my fastball command all day, but the cutter was working and the change-up was working and that’s what I had to lean on. I got, what, I think it was a 3-2 count. I was right on the brink of walking him, but thankfully I had that strikeout and got us off the field.”

Thompson said beating a program of Stanford’s caliber is an important step in Auburn baseball’s history. He said he followed the Cardinal’s success as a kid growing up in Mississippi.

As Stanford prepared to leave Omaha, Cardinal coach Dave Esquer said he wouldn’t spend much time thinking about the historical significance of Monday.

“I’m proud of these guys,” Esquer said. “And nothing will take away from what we’ve accomplished this year.

“I mentioned to them in our huddle that, when time passes, no one is going to remember what the score was of any of our games or what our record here at Omaha was. I think what I will remember I had a chance to go to the College World Series with a team I love and spend about a week trying to play for the national championship.”