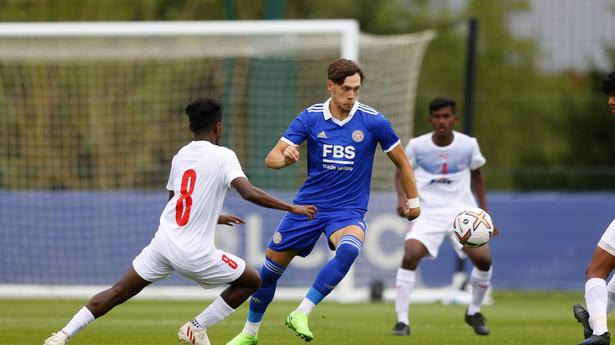 Indian Super League side, Bengaluru FC, opened its Next Generation Cup 2022 campaign with a 3-6 loss against Leicester City at the Leicester City ground.

Sivasakthi Narayanan was the star performer for the Blues as the 21-year-old forward scored a second-half brace. Damaitphang Lyngdoh, too, got on the scoresheet for the Indian side with a long-range effort as the Indian side came back from six goals down to build up hopes of a comeback.

Winner of the Reliance Foundation Development League 2022, Bengaluru started the match keeping the Leicester defenders on their toes with a high-press. But the Foxes quickly turned the match in their favour in the 13th minute after Pennant Kian scored from a well-constructed attacking move.

It took just five minutes for Leicester to double its lead in the 18th minute after skipper William Alves beat Bengaluru keeper Sharon Padattil with a thunderous volley from close range.

The Foxes found their third goal just three minutes after, through a stroke of luck when their No 9 Chris Popov’s shot took a deflection off Bengaluru defender Robin Yadav and looped inside the net past the helpless keeper.

The onslaught continued as Leicester found its fourth goal in the 26th minute. It was poor keeping from Sharon as he could not hold on to a low cross from the right flank, and Kian was there to tap the ball inside the net for his brace.

Leicester started the second half with a resounding 4-0 lead, but the Foxes carried forward the momentum from the first half by scoring their fifth early in the second half. Popov found himself with space and time inside the Bengaluru box and found the net with an exquisite low-driven shot at Sharon’s far post to make it 5-0 in the 52nd minute.

Chris Popov soon had his hat-trick as he slotted a penalty past the Bengaluru keeper. But from there on, Bengaluru FC was the dominant force as it found a way to slot three goals past the Foxes’ goalkeeper.

First, it was the turn of Sivasakthi Narayanan, who slotted home from an acute angle to open his side’s account. Lyngdoh followed that in the 69th minute with an effort from outside the box which crept past Arlo Doherty, the Leicester keeper.

Sivasakthi doubled his tally four minutes later as he cushioned a pass from the midfield to pierce a right-footed shot into the bottom right corner to bring down the deficit to half.

Dipesh Chauhan, the substitute keeper for the Blues, then denied Terell Pennant from the spot and then followed it with a reflex save from the rebound.

Leicester City closed out the game from there on, with both teams getting a few chances at both ends of the pitch..