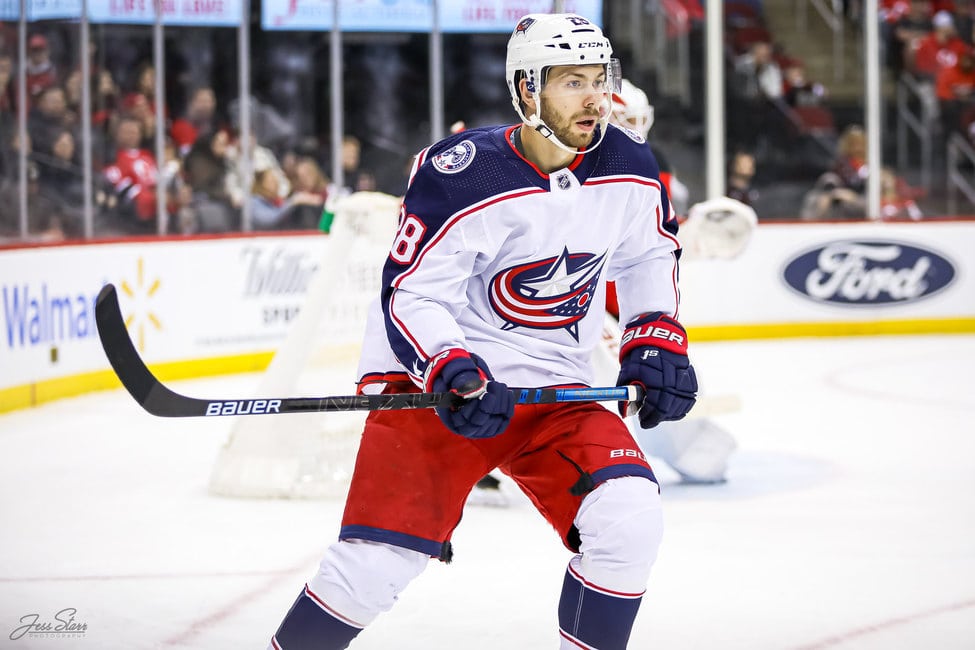 Friday was a wave of emotions for the Columbus Blue Jackets and their fanbase. Starting with the most anticipated move of the offseason – superstar forward Patrik Laine re-signed with the franchise for the next four seasons. The fanbase was electric and still riding the high of Johnny Gaudreau being the biggest free agent acquisition in franchise history. That high was cut short with a trade later that same day, though.

The Laine contract put the Blue Jackets several million dollars over the salary cap. That meant someone had to be shipped out to make the team cap compliant. The head on the proverbial chopping block was a long-time fan favourite in Oliver Bjorkstrand who was traded to the Seattle Kraken for a third and fourth-round pick in next year’s draft.

The second longest-tenured Blue Jacket, Bjorkstrand made his mark on the young franchise. He was drafted by the organization 89th overall in 2013 and has played in the NHL since the 2015-16 season. He sits eighth all-time in Blue Jackets’ point scoring with 234, 7th in goal scoring with 111, and 16th in games played with 382.

Based on the social media outrage following the trade, his departure has angered the fanbase. Even Blue Jackets’ general manager (GM) Jarmo Kekalainen, who is one of the least emotional GMs in front of a mic, said that trading Bjorkstrand was the toughest decision he’s had to make in his tenure with the team.

“Definitely mixed emotions. Probably the hardest decision I ever had to make as the GM of the Blue Jackets – to trade Oliver Bjorkstrand who I think very highly of, not just as a hockey player, but as a person. He’s been part of us and our organization for nine years and that was my first draft with the Blue Jackets. Having personally seen him and scouted him when I went to see Seth Jones quite a bit and kept noticing Oliver Bjorkstrand. Seeing him grow and win the championship in Cleveland with us and become a real good player in the NHL.”

While the move hit the emotions of management, fans, and players alike, it was the right decision for the Blue Jackets as they look to become a serious Stanley Cup contender.

“It was so hard to make that decision, but it is the ugly part of the business,” says Kekalainen. “That’s what we’ve got to call it, and a decision had to be made. You can easily calculate the cap-space around the whole league and there was no good options available for us really.”

The flat cap in the wake of COVID-19 restrictions has really put a strain on the salary cap situation for many teams. As of the writing of this piece, just under a third of NHL teams are projected to be over the salary cap, and three more teams have less than $1 million free. That puts a lot of teams in a vulnerable position financially since there is no choice – all teams must be under the salary cap before opening night.

It’s a loaded gun to the head of a lot of teams and it’s one that the Blue Jackets found pointed at them following their blockbuster acquisition of Gaudreau. Being several million dollars over meant one significant cap hit or several smaller ones had to be moved to make space under the cap.

With so many other teams looking to offload talent to a short list of suitors with enough cap space to help, the Blue Jackets were between a rock and a hard place. With little to no leverage, it was a losing situation. The next move became less about adding assets and more about loss management.

“This was the best of the no good options that was available for us to become cap compliant and it had to be done.”

The return for Bjorkstrand was not a lot for a legitimate top-six forward. Especially one who has led the Blue Jackets in scoring over the last five years. However, with how little leverage the team had and how they didn’t have to give up any picks or prospects as a sweetener to get the deal done – as is standard in cap-clearing trades – it was as close to a win as possible.

Why Not Gustav Nyquist?

For those most stung by the trade, a common finger being pointed is at Gustav Nyquist. So why did they choose to trade Bjorkstrand over Nyquist?

Yes, Nyquist and Bjorkstrand have a similar cap hit. Nyquist at $5.5 million and Bjorkstrand at $5.4 million. You’d think Bjorkstrand would be the player they’d want to keep more at 27 years old compared to Nyquist at 32. The key differentiation is the contract term. Bjorkstrand has another four years on his deal while Nyquist is on the final year of his contract. This is where it gets a little technical, so stay with me.

Now, why is the term so important? Looking into next offseason there are several players that will need new contracts – which is when more flexibility will be needed.

The big names that need to be re-signed are Vladislav Gavrikov, Alexandre Texier, Andrew Peeke, and Yegor Chinakhov. Those players’ current cap hits add up to just over $6 million. All are due for a raise – with most of them likely to double their current salaries. To be conservative, let’s mark out $12 million just to maintain those four pieces.

By trading Bjorkstrand, the Blue Jackets have $14.6 million to re-sign those four players and had they traded Nyquist, it would have only been $9.2 million. It’s just not enough space to be comfortable retaining all those pieces. Another head would’ve had to roll to simply maintain their roster – so that’s already two casualties instead of just one.

With the trade they made, and if their contracts do double, that leaves $2.6 million to play with and even attempt to re-sign Nyquist. If he really wants to stay in Columbus – which is a city and locker room that he consistently says he loves – he will shave a little off of his current cap-hit to be a part of a team in the twilight of his career. And that space should even be a little larger with the cap expected to rise next season, which adds more room to re-sign him or go fill another need next offseason.

The bottom line is that sacrificing Bjorkstrand now makes it possible that he is the only cap-casualty, as opposed to almost guaranteeing a loss of two or more through next offseason. For those with a vested interest in the Blue Jackets, the trade may sting now but it’s a pain that prevents a greater hurt for overall team success moving into next year and beyond.

Writer covering the Columbus Blue Jackets for THW since August 2021.

Also, a radio personality and reporter currently based on Vancouver Island.