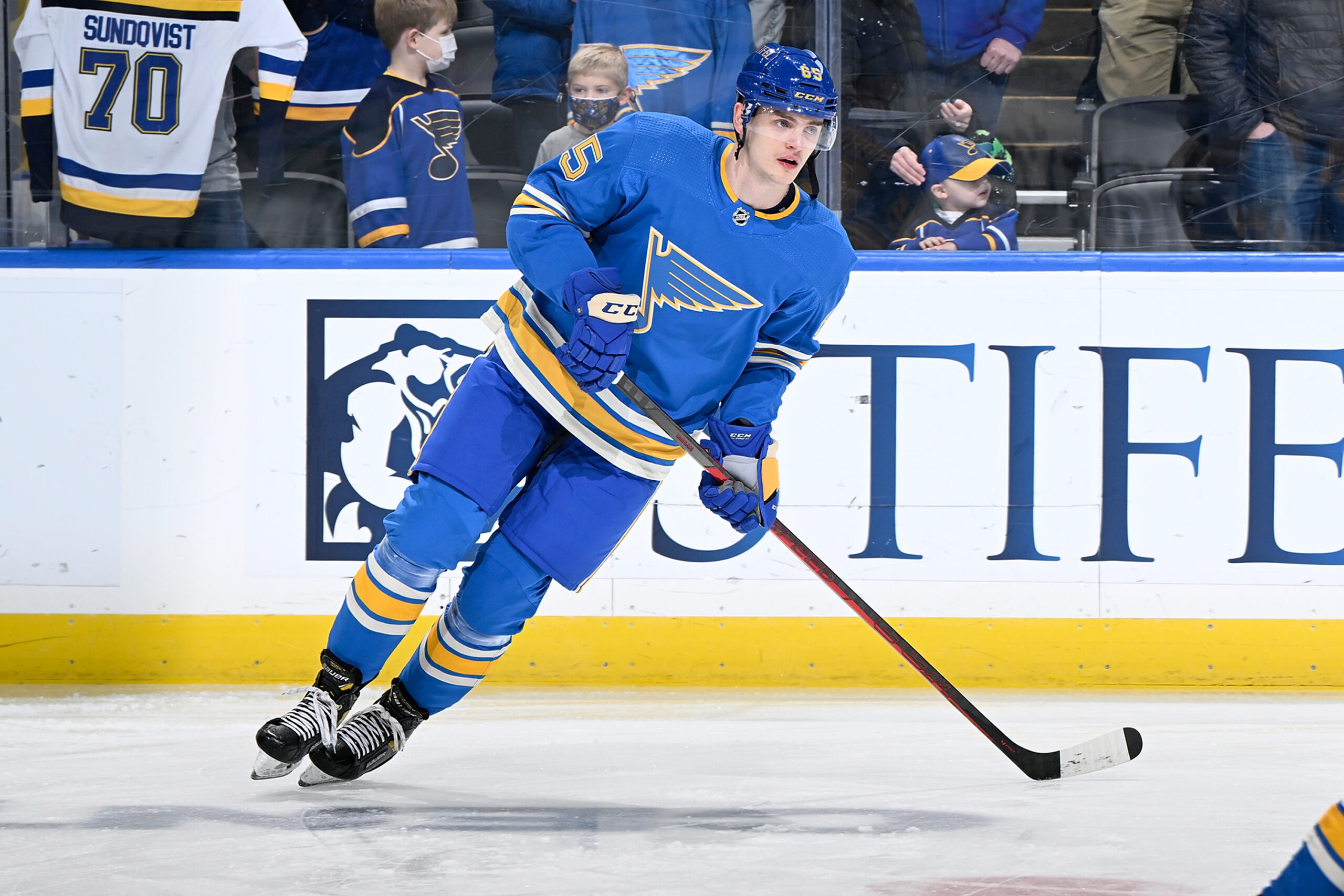 The St. Louis Blues 2021-22 season represented a major transition for the franchise. No longer a stout defensive team built from the blueline out, they finished second in the NHL in goals scored, with nine forwards recording 20-plus goals. Though the season came to an end in a six-game defeat by the Colorado Avalanche in the second round, there are plenty of highs and lows to reflect on. In this series, we’ll evaluate each player who played 10 or more games with the team (as well as the head coach and general manager), grading their individual performance and looking at their future with the team.

During the Doug Armstrong era, the St. Louis Blues have proven time and time again that they draft extremely well. They have almost never missed on a first-round pick, they’ve regularly succeeded with their second and third-round picks, and they routinely find diamonds in the rough late in the draft. Alexei Toropchenko — whom the Blues drafted late in the fourth round in 2017 — is quickly becoming another success story in that final category.

This season, Toropchenko rose from an American Hockey League player — who had struggled in the KHL in Russia during the pandemic-threatened 2020-21 season — to an NHL regular who looks to have a locked-in spot and a bright future with the team. Let’s take a little closer look at how he made that journey.

What Went Right: Becoming a Favorite of Berube and Fans

Blues fans and head coach Craig Berube have similar taste in hockey players: they want big, hardworking grinders who never give up on a play. As soon as Toropchenko arrived in the league, he proved to be that. What first jumped out was his skating: though he stands 6-foot-6 and weighs 222 pounds, he moves quickly on the ice, which makes him a dangerous straight-line attacker and forechecker. He got his first taste of the NHL in December, playing in five games between Dec. 14 and Jan. 15. But when he returned to the NHL on March 8, he played in every remaining game, including all 12 playoff games. His coach was quick to praise his performance in the most critical games of the season.

His first NHL goal came on March 19, and it was a long road to get there for Toropchenko. The son of a former Pittsburgh Penguins draftee (Leonid) who never made the NHL, he dreamed of reaching a level his father could not, and he knew the work it would take to get there. Having now reached his goal, he doesn’t look to be going anywhere. Though he scored just two goals this season, he clearly has established himself as a valuable piece in the bottom-six, and he’s going to be an important part of the Blues’ future.

What Went Wrong: Nothing

It would be unfair to highlight any mistake or error from Toropchenko’s season as something that “went wrong.” He started as an AHL player with a lot of questions, and by the end of the season, he was an NHL player with a certain future. There’s not much more that you could ask for from a season.

Toropchenko played well, earned his teammates’ and coaches’ respect, and etched out a permanent role at the highest level of hockey. He might not have a level to reach beyond this. A solid bottom-six forward might be all he becomes. But right now, that is all he needs to be. And he looks great in his new role.

At the risk of beating a dead horse, Toropchenko rose from an AHL nobody to an NHL player with a bright future. You can’t ask for more from a player in his position. Now, he just needs to show staying power at the highest level.

Fans, the head coach, and the general manager seem to love Toropchenko, and he’s popular with his teammates, especially fellow Russians Vladimir Tarasenko, Pavel Buchnevich, and Ivan Barbashev. Most would say he is a likely NHL fixture next season. Blues beat reporter Jeremy Rutherford went even further:

You can use a sharpie to write Toropchenko’s name on the lineup card for opening night. The fourth-round pick from 2017 proved to be a real find this season, using his 6-foot-6, 220-pound frame and terrific skating to be one of the Blue’s most noticeable players every night.

From “The Blues’ 10 biggest offseason priorities after a 2nd straight loss to the Avalanche,” The Athletic NHL, May 31, 2022

Toropchenko, who lost his father tragically in 2017, just a month before he was drafted to the NHL, is now living the dream his dad couldn’t quite reach. It’s been a long time coming, but he’s finally here, and he’s here to stay.

Stephen Ground is a veteran of over three years at THW, focusing on the St. Louis Blues, NHL goaltending, and the annual World Junior Championship. He is the co-host of the Two Guys One Cup Podcast, a hockey podcast focused on the Blues.