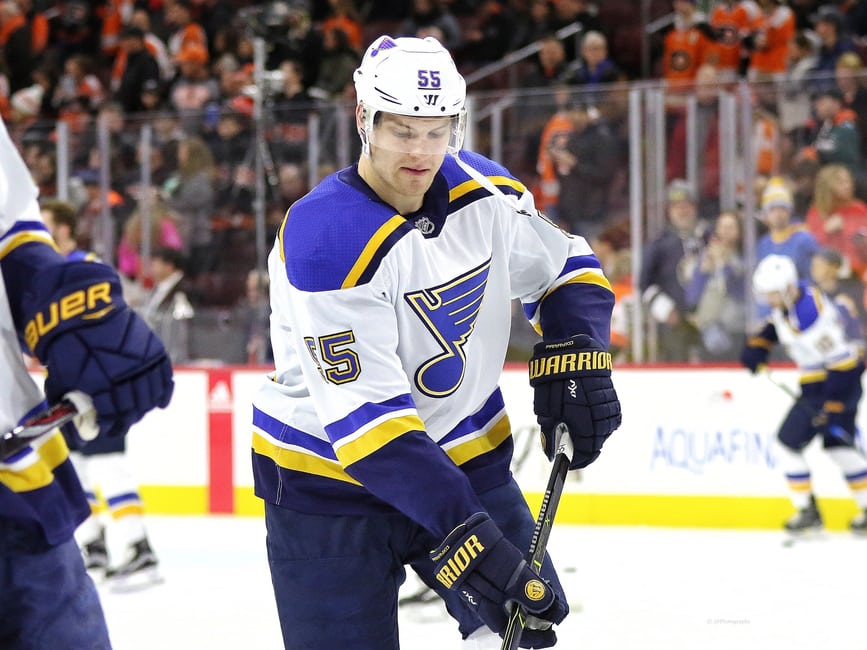 After letting captain Alex Pietrangelo walk prior to the 2020-21 season, the St. Louis Blues looked to Colton Parayko to lead their defensive unit. That hasn’t exactly worked out well, but they are sticking with him after giving him an eight-year extension prior to the 2021-22 season.

It was a shaky season for Parayko, but better than what he did in the 2020-21 season. He looked much healthier, but his play didn’t improve all that much. Still, there was a definite improvement from last season, though he hasn’t returned to his 2019 Stanley Cup form.

In terms of health, this was the best of Parayko for 80 games. He has played 80-or-more games three times, and it all happened from 2016-17 to 2018-19. The NHL obviously had some scheduling issues due to the pandemic, but he played only 32 of 56 games last season. Health issues have certainly had a tremendous effect on Parayko over the last couple of seasons, and even as he was healthy this season, it still wasn’t the same.

He had 35 points this season, the most he has had since 2017-18 and it ties his career-high that he’s reached three times. Overall, a lot of the numbers for Parayko were solid, as he was a plus-16, and that’s the third-best he has ever had. The eye test and analytics tell somewhat of a different story, but it is somewhat encouraging to see some of the signs that he is back to his normal self.

The hesitancy with the puck in all three zones was a major issue for Parayko. He had far too many awful turnovers that led to high-danger chances or goals against. He had a career-high 53 giveaways this season, and a lot of those were mind-numbing to watch. A lot of this can be blamed on the Blues not finding a competent defensive partner for him, and that is totally valid.

It hasn’t really worked with Niko Mikkola, and it certainly hasn’t worked with Marco Scandella for Parayko. Nick Leddy was a solid partner for Parayko, but it doesn’t seem overly likely that he is re-signed by the Blues, based on their salary cap situation. The brutal part of it all is that Jay Bouwmeester was a perfect partner for Parayko, and the incident in 2020 was unfortunate and ended his career.

The worst part about watching Parayko in the last couple of seasons has been his refusal to shoot the puck. For reference, he tallied 135 shots on goal in 80 games. From 2015-16 to 2019-20, when he played 60 or more games, he had over 160 shots in each season. Rarely is there a time when Parayko gets on his horse with the puck and flies up the ice, that used to be a constant for him. He needs two things moving forward, more confidence and a better defensive partner. Either way, it will be hard to justify the contract that he signed prior to this season.

The expectations are high for him based on the contract and expected role. This is a generous grade, but he had a far better 2021-22 season than the previous two. He was solid in the playoffs, scoring two goals and three assists in 12 games while being a plus-5. His performance was solid overall, but still not where it needs to be over the next eight seasons of this contract.

What’s Next for Parayko?

As has been mentioned multiple times, Parayko signed an eight-year extension before the 2021-22 season with a cap hit of $6.5 million. He’s going to have to find some consistency and confidence in his game for this to work out. Part of it will be on the Blues this summer to find a competent defensive partner for him, but there is still hope with Parayko to be at least a top-two defenseman on a consistent basis.