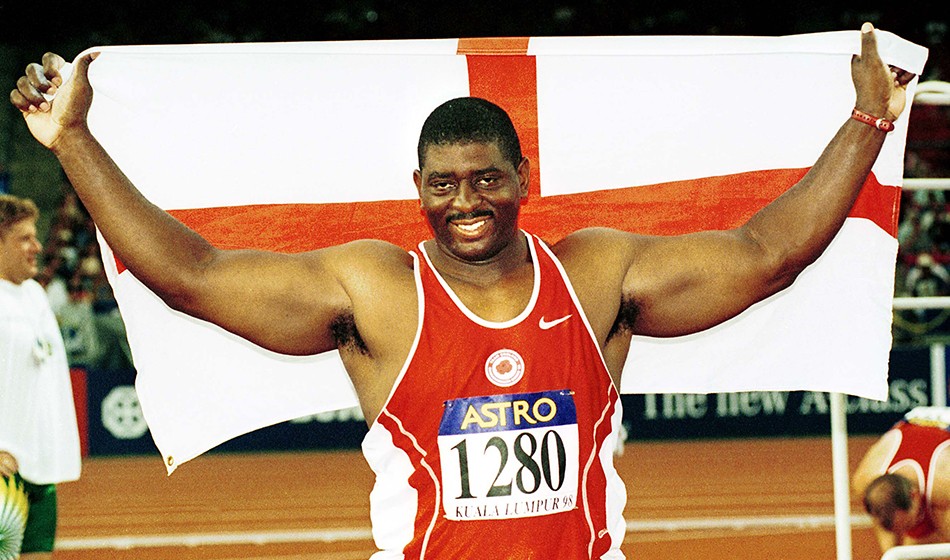 This summer marks 20 years since Bob Weir won a discus bronze medal for England at the Commonwealth Games in Manchester. Aged 41 at the time, it was the final medal-winning act of an amazing career that began in earnest with Commonwealth gold in the hammer in Brisbane in 1982 and included Commonwealth gold in the discus in Kuala Lumpur in 1998, plus three Olympic appearances, a dozen national titles and British records in both of his events.

His unique double at the Commonwealth Games will probably never be seen again. “It is not the same as a sprinter running both 100m and 200m, but more like somebody doing both pole vault and hurdles at this level,” says fellow thrower Shaun Pickering, who first competed against Weir at the English Schools Championships before going on to win a 1998 Commonwealth bronze himself in the shot put.

Pickering adds that Weir’s discus triumph in Kuala Lumpur, where he threw 64.42m, is arguably the best performance at a major championship by a British discus thrower. Such was his talent, Weir missed some of his best years in athletics, too, due to a six-year spell in the Canadian Football League, and once even took part in the World’s Strongest Man contest. Off the track he is a popular, likeable athlete who was named captain of the GB team during his career and memorably lifted the European Cup after a nail-biting half-point victory over Germany on home soil in Gateshead 22 years ago.

On that occasion, as a young reporter for AW, I found myself standing with my dictaphone under the giant of a man as I grabbed some quotes from him about the team triumph. This time I find myself chatting to him via a video call given that he is in the United States, continuing his successful career as a throws coach at the University of Missouri.

I ask him to cast his mind back even further to tell me how he got into the sport.

“Sometimes someone has a certain attraction to something and that’s what it was like to me when I saw athletics on the television. I was hooked,” he says. “To start with I used a blanket with electrical cord around it as I pretended to throw the hammer. I was so engaged with it.

“It’s like when someone wants to become a physicist, musician or artist, there is something inside you that finds a connection and once that button is switched on then that’s what you decide to spend your time on. With me and athletics I have no idea how it happened, but it did. It’s a lifelong relationship that I have with the sport.”

Weir went to school at Handsworth Grammar – not far from the Perry Barr area of Birmingham – and he trained with Birchfield Harriers. He remembers fondly walking to the track to train but did not realise his own talent to begin with.

“As an 11 or 12-year-old I threw the discus about 25m but I started training and then I just kept growing. One year my mum gave me clothes that were far too big but at the end of the year they didn’t fit!”

Weir was influenced by another Birchfield Harrier, Howard Payne, who won three Commonwealth hammer titles for England – in 1962, 1966 and 1970. “I was throwing discus and hammer and starting to get better,” Weir remembers. “They had Midland Counties hammer weekends where each coach had a talent recruitment day. I went to Birmingham University for this and hadn’t thrown the 16lb hammer before but I threw about 33m. I was about 16 years old and had no idea what I was doing but Howard said: ‘You know, Robert, you can be pretty good at this. We think you should come back to train.’”

Weir began training harder and grew into one of the world’s top throwers in discus and hammer.  In addition to his Commonwealth hammer title in 1982, he won the AAA crown in the same year and broke the UK record with 75.08m. In discus, as well as his gold medals in Kuala Lumpur and Manchester, he took bronze at the 1994 Games, won 11 AAA titles from 1982 to 2002 and set a UK record of 64.60m in 1997 in Budapest.

Throwing at a high level in hammer and discus is an unusual combination surely? “That’s a fair point,” he says. “Most international athletes specialise in one event, especially in throws. But I was a bit of an anomaly at the time. Some athletes threw shot and discus but hammer and discus wasn’t common.

“I think people have abilities in certain areas and they gravitate to that but sometimes I would throw the discus part-time in comparison but it would still improve,” he adds.

When asked to pick the best moment of his career, Weir surprises me by not selecting a particular event or throw. Instead he says: “The best moments are seeing the friends that I’ve grown up with sharing in the delight of my success. Being able to have my kids look back and see what their dad has done as an athlete. Sharing that success and some of those magic moments was a lot of fun and something that was meaningful to me.” 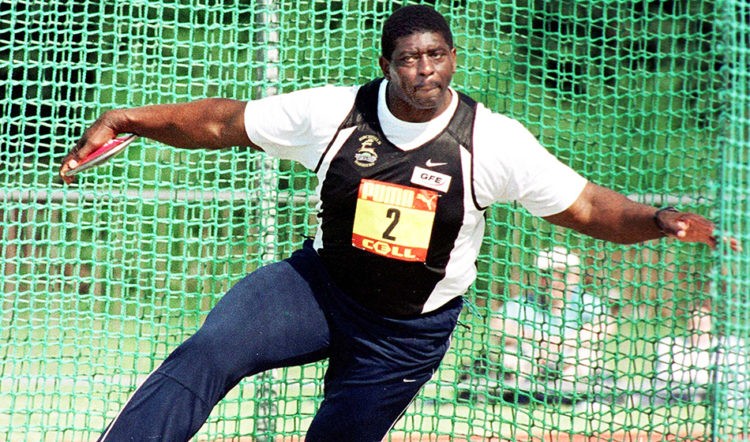 He looks back with great pride at his coaching career, too, in which he has not only helped throwers like American shot putter Adam Nelson reach the Olympic podium but has also worked with swimmers like Karen Pickering, Jenny Thompson and Dara Torres, hockey player Sami Jo Small and many more.

Britain has had the opportunity to use Weir’s experience and skills but he has found the American collegiate system to be more appreciative of his abilities. Certainly, when it comes to throwers, he feels the US system is a better place for athletes to develop, too.

I ask him if he keeps an eye on athletics in the UK and he says: “I pay attention to it and I will say that the reason why I left Britain to pursue athletics further was because there was no support, no help and very little funding to develop the throws.

“There is a lot of effort going into the sprints, year in, year out, but not much for the throws. There is no formal structure that will help an athlete reach the next level. It’s the reason I left the UK and it’s the reason athletes are still leaving now.

“You have a young athlete called Anna Purchase who has thrown 70m in the hammer and Tara Simpson-Sullivan who has thrown 69m and they’ve left [the UK] to pursue athletics further – as well as an education, of course – because they’re given a scholarship and [work under] professional coaches whose job it is to make them better athletes. Shot putter Divine Oladipo is another example of a Brit who now trains with Joe Kovacs’ coach at Vanderbilt University.

“They have high exposure to world-class athletics and training but in Britain they have no such thing. With most athletes if they want to get better they have to leave and go elsewhere. It was the case with me 40 years ago and I’m afraid to say it’s still the same today.”

What does Weir think about Lawrence Okoye, the UK discus record-holder, who made a dramatic impact to reach the final at London 2012 but then had time out from athletics to play American Football?

“The reason why he left to go to football was because he had some support (in the UK) but it wasn’t enough,” says Weir. “He’s a very talented man and wouldn’t surprise me if he throws over 70m in the next year or two. One of his problems is that he’s a very smart young man but sometimes it doesn’t matter how smart you are, experience is the better teacher.” 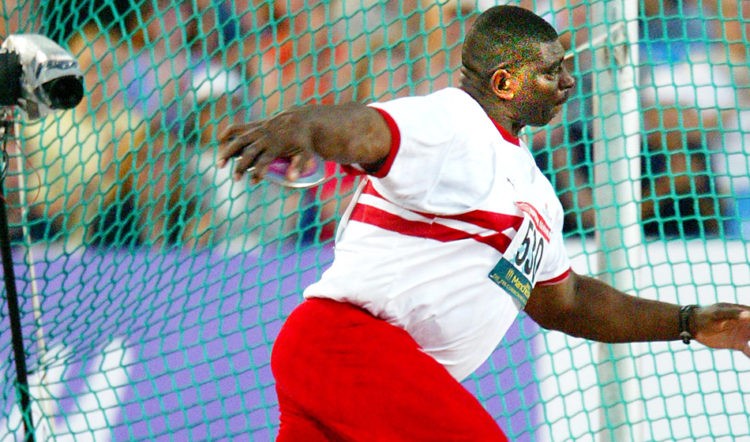 Weir has also been non-plussed by the attitude of organisers of the Commonwealth Games in Birmingham when it comes to the lack of invitation for athletes like himself – who grew up in the city competing for Birchfield Harriers – to this summer’s Games.

Despite still waiting for his Birmingham invite, Weir is likely to have very good reason to travel back home for the Games. That reason is his daughter, Jillian, who has turned into a world-class hammer thrower, represented Canada at the Tokyo Olympics and has been selected to compete at the Commonwealth Games this summer. 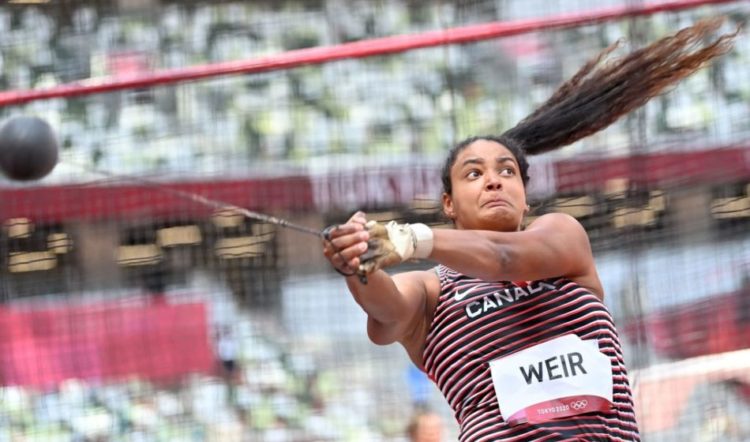 “She came to that event by herself – it had nothing to do with me!” says Weir. “I just advised her to do something that she had a passion for and it ended up being sports.”

After Jillian found that her own path led to hammer throwing, Weir stepped in to offer coaching advice. Which brings to me to my final question – does he have a coaching philosophy and, if so, what is it?

“I feel sometimes I’m helping someone on their journey and as a coach I’ve done my part to help them for that time period that I’m spending with them,” he says. “Rather than me being the coach and they’re the athlete and ‘do as I say’, it’s more like figuring out what the best thing is for the athlete in order to get them to another level.

“The most important thing for an athlete is the desire and to want to get better.”

» This article first appeared in the July issue of AW magazine, which you can buy here