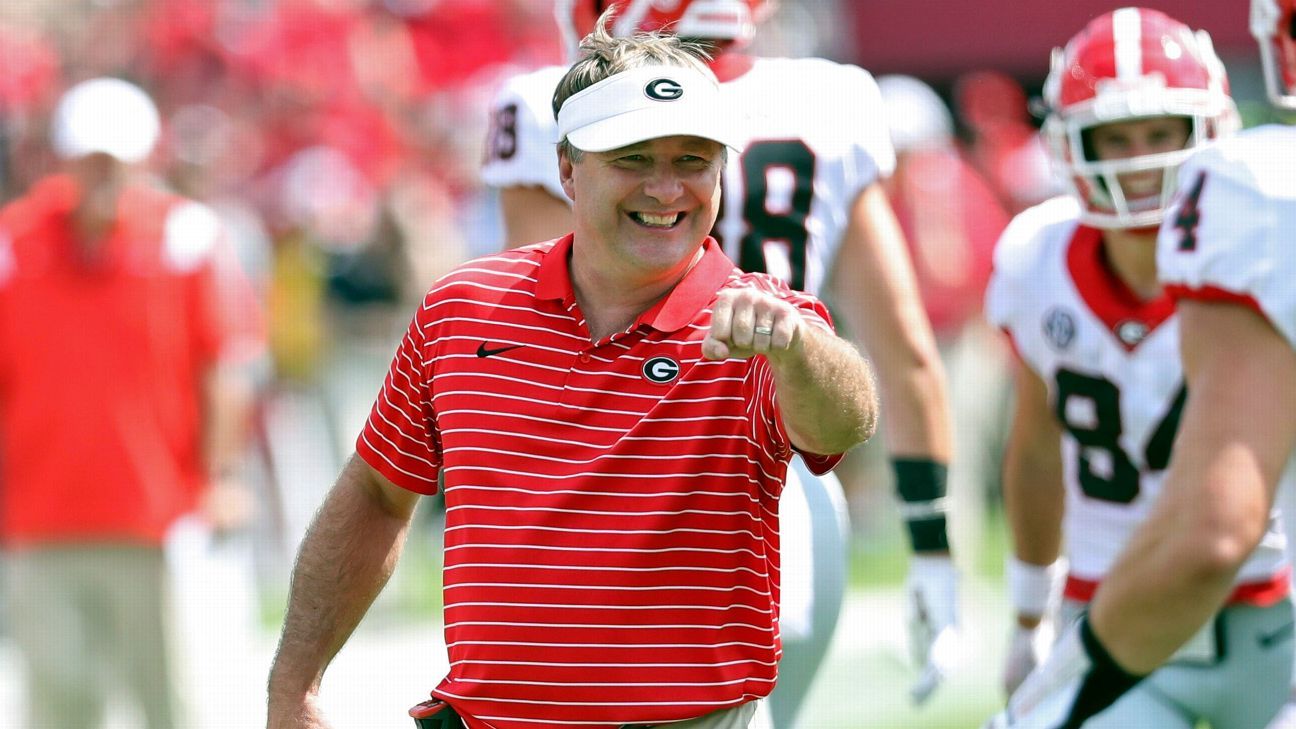 That’s truly my favorite aspect of the Allstate Playoff Predictor. As we sit around and wonder who gets in if X, Y and Z all happen, the Predictor has the answers. Or, at least a probabilistic forecast.

While the committee provides weekly rankings that offer insight into its strange collective mind, it requires predicting the rest of the season and forecasting what the committee might do in a given scenario to determine a team’s playoff chances. So let’s do just that and dive into possible ways the rest of this college football season could play out.

And if we don’t cover a scenario here you’re wondering about, don’t fret: you can play along, too.

(Note: TCU almost certainly loses in this scenario — we only give them a 4% chance to win out — but we don’t specify that to keep the number of simulations up)

This win out scenario ends up with a pretty spicy decision for the selection committee.

Georgia and Ohio State are in. But after that, assuming TCU does lose somewhere along the way, there are no other locks here! The Predictor has a virtual tie for spots Nos. 3 and 4: with Tennessee and Oregon each with a 53% shot to get in. Oregon would be a one-loss conference champion and Tennessee would be a one-loss non-champion but against the toughest schedule of any playoff contender.

Clemson and Michigan aren’t necessarily out here though: They have a 39% and 37% chance to get in, respectively. Clemson would still be a one-loss champion, but would have an easier strength of schedule than Oregon in a similar boat. Michigan, similarly, would be a one-loss non-champion but against an easier schedule than Tennessee.

How everyone gets to this spot could make a difference for the committee, but in general the model believes Tennessee and Oregon would have the edge.

We’re subbing out Oregon for USC here, but it’s made slightly more complicated by the fact that the Trojans can win out and not be guaranteed a spot in the Pac-12 championship game. Let’s say they do, though. Technically, we’re below the threshold for number of simulations to use the projections, but let’s roll with these numbers anyway — don’t tell my bosses.

In this scenario, Tennessee’s chances jump to 62% to reach the CFP. And then the real battle comes down to Michigan vs. Clemson vs. USC. It’s close: the Allstate Playoff Predictor would give Clemson a 44% chance, Michigan a 42% chance and USC a 36% shot.

Compared to Oregon, USC is hurt by the fact that it will have played an easier schedule and only ranks 13th in FPI. As for Clemson and Michigan? The committee’s recent rankings have me wondering if we’re overrating Clemson’s chances, even though those ranks are incorporated into the model. Still, it would be a one-loss conference champion, which Michigan would not be.

We can’t get too specific here because TCU winning out is already so improbable that it cuts down on the number of simulations we look into. But in this case, Ohio State, Georgia and TCU are in and it comes down to Tennessee as the favorite to take that last spot over Michigan at 11-1, though Oregon could throw a wrench in if it, too, won out.

What if Ohio State lost to Michigan and the Buckeyes finished 11-1 instead? Then they would have the slight edge as the fourth team to get in over Tennessee, though that would be far from certain.

If anyone is looking for three SEC teams in the CFP, this is the scenario for you. It still depends somewhat on what happens elsewhere, but hang with me for a moment.

The model still assumes Ohio State is the most likely team to reach the CFP, closely followed by 12-1 non-champion Georgia at 84%. One-loss non-champion Tennessee would be at 70% and Alabama would still have a 55% chance to get in as a two-loss SEC champion.

Could someone else break in there if they got the results? Sure, a one-loss Oregon or Clemson might have a case. They would have fewer losses than Alabama, though the Crimson Tide would be conference champs in a more difficult conference. Tennessee wouldn’t have the conference title but would have a more difficult schedule. There might be an anti-three-teams-from-the-same-conference bias in real life that’s not reflected in the model, but they would have to at least consider it.

Heather Dinich assesses the chances that Tennessee, Oregon and LSU will crack the Top 4 of the College Football Playoff Rankings.

We’re again in a world with precariously few simulations so we can’t use exact numbers here. But this scenario is murky as all heck for the committee and the Predictor. Georgia and Michigan are in. But after that? They could go anywhere. The model would truly have Oregon, Ohio State, Tennessee and Clemson all exceptionally close to grab the final two spots.

Ohio State is in and Georgia likely is too at 12-1, with a 76% shot, per the Predictor. Then, Tennessee at 59% and LSU at 56% (hey, look at that — another way three SEC teams could get in). There’s a big but here, though. This is all without locking in any of the following teams if they win out: Clemson, Oregon, USC or TCU.

If Oregon wins out, the Ducks likely jump ahead of Tennessee and LSU. If its Clemson? Then, it’s up in the air but the model believes the Tigers would slot in behind the two SEC schools.