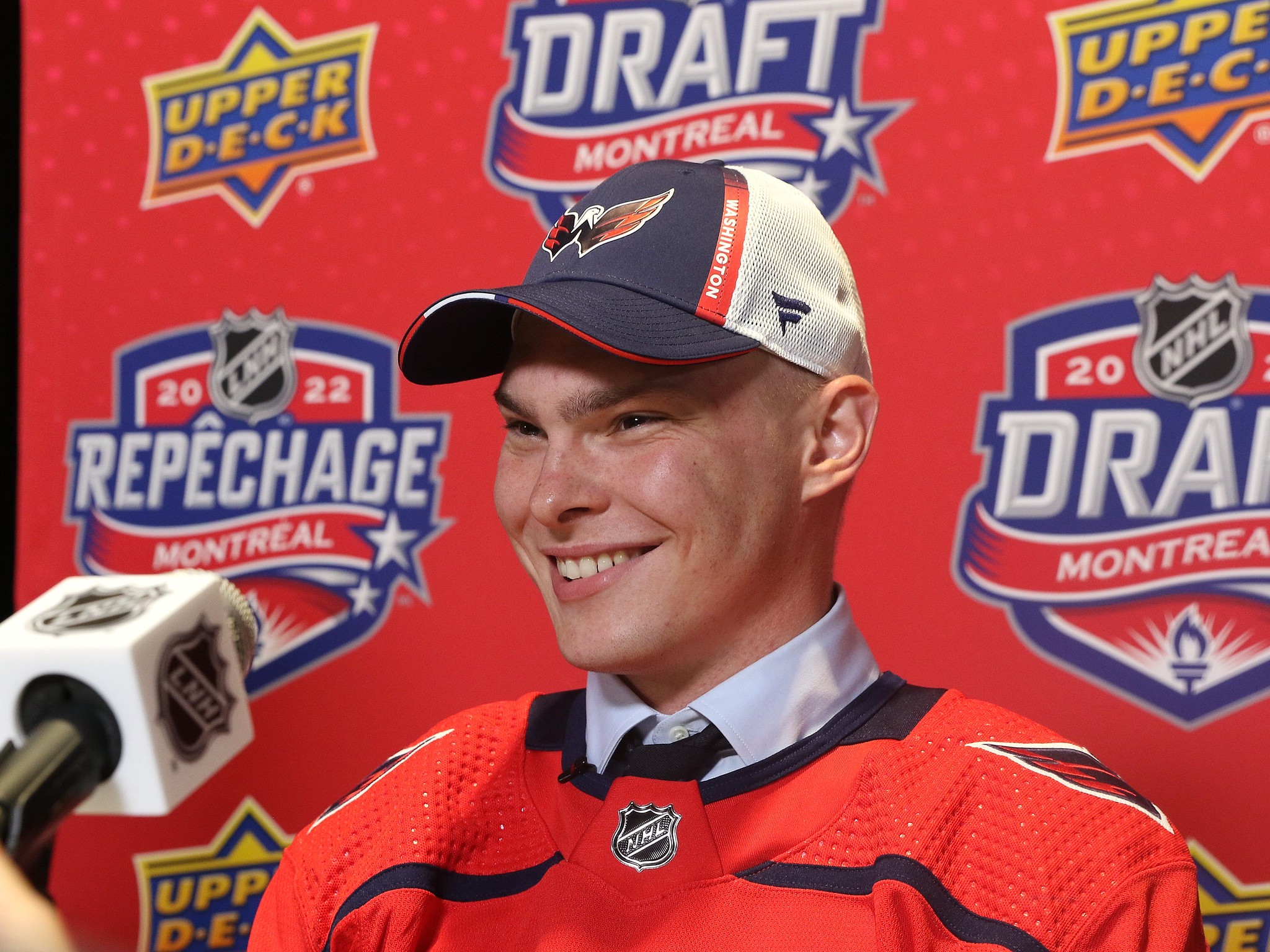 The Washington Capitals have once again added to their prospect pool with the additions of six new players selected at the 2022 NHL Entry Draft just weeks ago. In the draft, they had seven total selections through the seven rounds, where they picked three wingers, two defensemen and two centremen. In this piece, I’m going to cover the first three selections the Capitals made.

With their first-round pick, the Capitals selected winger Ivan Miroshnichenko from Russia. In the 2021-22 season, he played 31 games with Omskie Krylia of the VHL, where he scored 10 goals and added six assists for 16 points. At 6-foot-1, 194 pounds, he is a sizeable player that adds a solid skating element to his game. He has also been praised by scouts around the NHL for his elite shot and stickhandling skills. The Capitals likely won’t see him play in the NHL for a couple of seasons, but he will spend some time developing, and could soon become a really solid middle-six scorer.

In March of 2022, Miroshnichenko was diagnosed with Hodgkin’s Lymphoma. Luckily, his form of this disease is very curable and he has received treatment for it. This health issue had scouts and fans wondering if he would ever return to his full form, and were worried about the risk of taking him, hence the slip in the draft. At 20th overall, this pick isn’t as risky, and I think it could pan out really well for the Capitals. Yes, he fell a lot in the draft, but he seems to be willing to put in the work to one day, be a go-to player in Washington.

With their 37th overall selection, the Capitals picked American defenseman Ryan Chesley. In the 2021-22 season, he played 59 games with the U.S. National U18 Team where he scored 12 goals and added 17 assists. On top of this, he played 26 games with the USNTDP Juniors team, where he scored five goals and added 10 assists. At 6-foot, 201 pounds, he is a solidly built player with a ton of upside, as he has been praised for his quick decision-making and incredibly evident high hockey IQ. Although he might be a few years away from contending for an NHL roster spot, some time in the NCAA, where he has committed to the University of Minnesota for the 2022-23 season, will help him immensely with his development.

Chesley has been praised for his solid defensive play and decision-making in his own zone, but his leadership abilities along with a small scoring touch as a defenseman are just bonuses for what this kid can bring to the table. The Capitals got a steal with Chesley, as many scouting websites, NHL scouts, and even Bob McKenzie had him going around 20th in the draft. His game has drawn a “stylistic comparison” to Jake Muzzin, who has become an established veteran in the NHL currently with the Toronto Maple Leafs as a trusted, top-four defenseman.

With the 70th selection, the Capitals went with 6-foot-2, 176-pound Swedish left winger Alexander Suzdalev. In the 2021-22 season, he spent the majority of his time with the HV71 J20 team in Sweden where he had 15 goals and 36 assists for 51 points in 45 games and earned an opportunity to play for his home country at the 2022 U18 World Championship. He has primarily been praised for his stick handling ability, but scouts have drawn attention to his hockey IQ as well. His ability to find open space and create opportunities not only for himself but his teammates is one of the biggest factors that made him stand out.

I really like this pick for the Capitals. I won’t lie and say I knew who he was coming into the draft, but after viewing his stats, watching some highlights and reading about him a bit more, I’m very excited about what he can potentially bring to the table. His offensive ability really catches my eye, just as much as it did the Capitals’ scouts I’m sure. I don’t think he’ll be ready for the NHL in his first couple of years, but I do think he has the potential to become a middle-six mainstay for the Capitals in the future.

Capitals Prospect Pool Now Lies Amongst The Best in the NHL

After adding what they did at the draft, the Capitals find themselves amongst the best in the NHL when it comes to prospect pools. With youngsters like Alexei Protas and Connor McMichael likely earning full-time NHL ice next season, it’s picks like these that will solidify a good future for the team and keep them contending for years to come. As for the 2022 Draft, I really like the additions of Miroshnichenko and Suzdalev, as I’ve always been a fan of natural scoring forwards.

With these selections, along with the other four made in the draft, the Capitals knew exactly what they needed to improve their pipeline and they went out and did just that. They don’t have a specific need anywhere in their lineup but instead just filled out all positions because hockey is unpredictable, and you never know what could happen with any of your players one day to the next.

I have been a writer for a little over a year now, and currently still play Junior Hockey in Western Canada. I’m a huge fan of the Capitals and Oilers, and I run my own hockey news page on Instagram titled “TheMugNHL”

Writing has become a hobby, as I plan to pursue business in university while still trying to play hockey as I go.