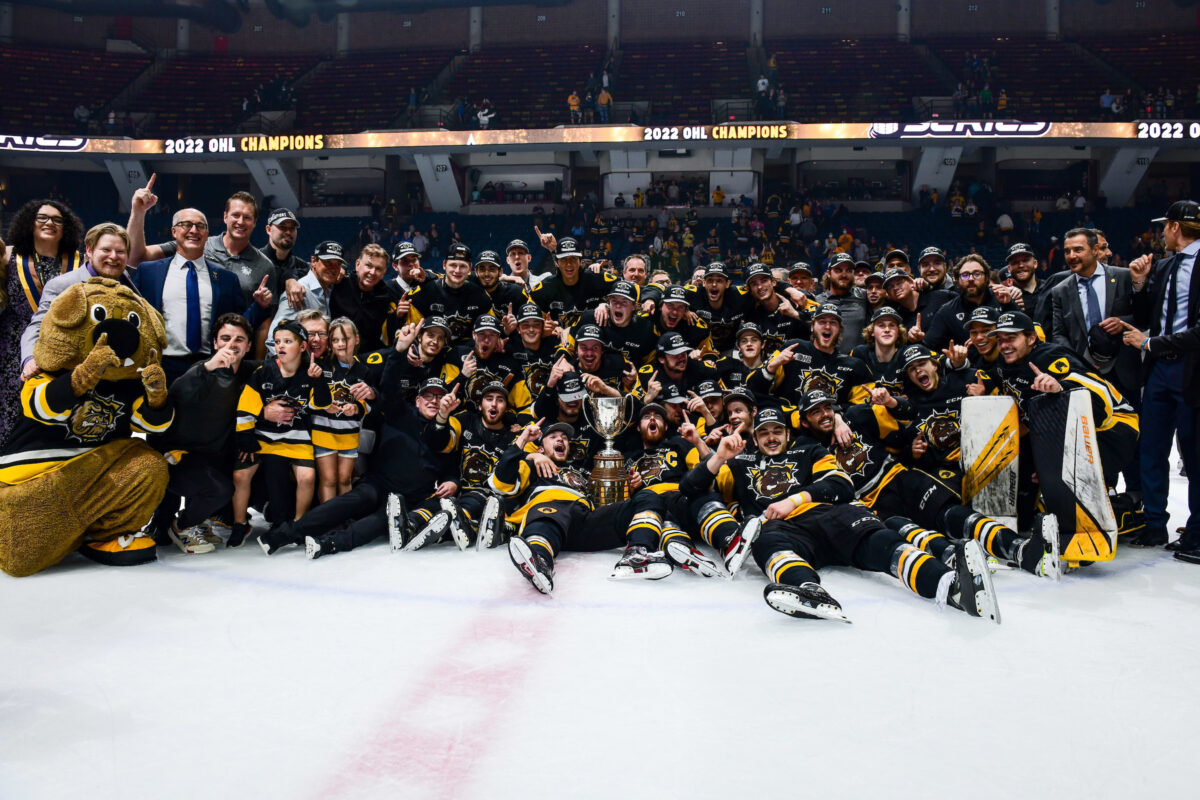 This series was everything a junior hockey could ask for. In one corner, the Bulldogs, winners of the Eastern Conference, the best record in the league, and owners of a 26-0-1 streak coming into the series. In the other corner, the Spitfires, champs of the Western Conference, a league-leading 305 regular-season goals, and 13-straight wins near the end of the season. While most predicted the Bulldogs would take this in four or five, the Spitfires weren’t backing down. After a win at the WFCU Centre in Game 6 on Monday, the clubs met at the FirstOntario Centre in Hamilton for the one-game showdown to end it all.

After beating the Bulldogs on home ice on Monday night, the Spitfires came into Game 7 with plenty of confidence. However, walking into a full FirstOntario Centre was going to be their biggest challenge of the season.

Not only were the Bulldogs the best home team in the league, going 27-4-1-2 this season, but they also opened the upper bowl to allow over 11,700 screaming fans into the game. It was the modern record for most fans at an OHL Championship Series game and they didn’t have to wait long to celebrate.

Just two minutes into the game, Anaheim Ducks’ prospect Mason McTavish opened the scoring on goaltender Mathias Onuska for a 1-0 lead. The Bulldogs’ defence took over, limiting the Spitfires’ offence to nine scattered shots. The second period was much of the same. Avery Hayes made it 2-0 while the home side suffocated the visitor’s offence. What little offence they could find was quickly stopped by goaltender Marco Costantini.

All season, the Spitfires have prided themselves on comebacks. No matter what the score was, they were confident that there was a way to win the game. However, this time, it wasn’t in the cards. While the visitors snapped the shutout late, thanks to forward Alex Christopoulos, the Bulldogs scored four in the third, including two more from Hayes and one from McTavish, to make it 6-1. The clock ticked down, the buzzer sounded, and that was it. The Bulldogs are your 2022 OHL Champions.

While Spitfires’ head coach Marc Savard had his players give everything, the Bulldogs showed why they were the top-ranked team in the nation. The visitors had no room to operate and frustration built. By the third period, they ran out of gas and the home side cruised to victory.

With the OHL Championship, the Bulldogs now get ready to head to Saint John, NB for the 2022 Memorial Cup. It runs from June 20 – 29 and will feature the three league champions along with the host team.

This season, the Western Hockey League (WHL) Champions are the Edmonton Oil Kings, the Quebec Major Junior Hockey League (QMJHL) Champions are the Shawinigan Cataractes, and the host team is the Saint John Sea Dogs. It should be an outstanding tournament with some high-octane teams. It’s the first time the Memorial Cup has been played since 2019 due to COVID-19 when the Rouyn-Noranda Huskies beat the Halifax Mooseheads 4-2 in the final.

Unfortunately, this means the Spitfires will be headed back to Windsor. It wasn’t the result they wanted but let’s be realistic. Coming into this season, the club hadn’t won a playoff series since 2011 and numerous veterans were toss-ups as to how they would perform. Add in a new head coach and COVID-19 and there was plenty of uncertainty. For them to be ranked fourth in Canada, win the Western Conference, and take the top-ranked team to Game 7 is mighty impressive. This city is mighty proud of its team. Savard said there’s nothing to hang their heads about.

“Windsor’s a great place to play hockey, our fans are fabulous, and I’m really proud of this group,” Savard told the OHL after the game.

“I was just glad to lead them. I tried to do my best, make them believe every day, and none of us should be leaving here with our heads down.”

We’ll get into much more regarding their off-season throughout the rest of June. Until then, the OHL and the rest of Canada will be watching to see how the Memorial Cup unfolds.