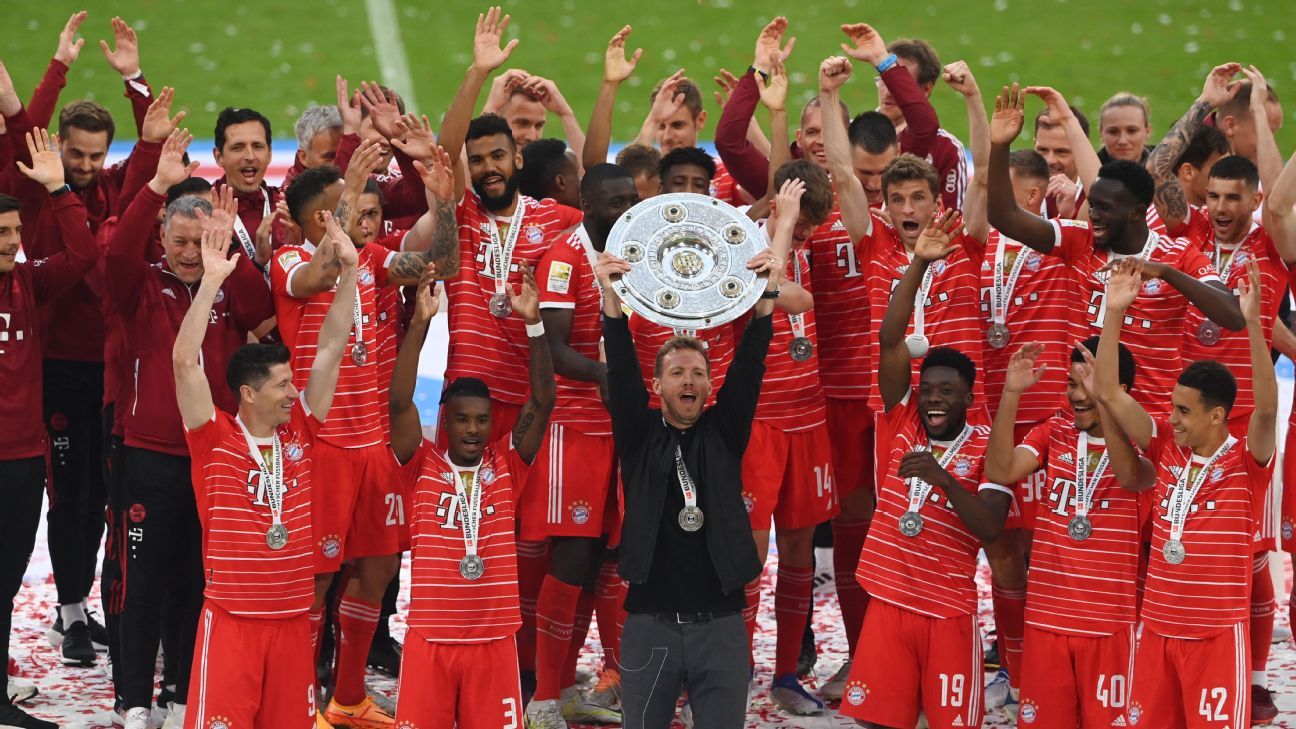 Bundesliga champions Bayern Munich will kickoff their title defence with a tough trip to Eintracht Frankfurt in the opening game of the 2022-23 season.

ESPN+ will be the home of the Bundesliga in the United States with live games on ESPN networks, as well as live streams of the DFL Supercup and relegation playoff matches.

Bayern will face the Europa League winners on Aug. 5 as they look to retain the league title for a record-extending 11th time in a row.

– Bundesliga on ESPN+: Stream LIVE games and replays (U.S. only)
– When does 2022-23 season start across Europe?
– Notebook: Lewandowski in, Lukaku out at Chelsea?
– Don’t have ESPN? Get instant access

No team had won more than three consecutive Bundesligas before Bayern’s stunning run and coach Julian Nagelsmann will be hoping to secure back-to-back titles in his time in charge.

The champions might start the season without star Robert Lewandowski who said he wants to leave the club with Barcelona and Chelsea interested in signing him.

Bayern are also looking to bolster their squad and have prioritised signing Liverpool‘s Sadio Mane this summer.

Elsewhere, Borussia Dortmund start their Bundesliga campaign with a home clash against Bayer Leverkusen on Aug. 6.

It is a new era at the club with Edin Terzic starting his first full campaign in charge after replacing Marco Rose while Dortmund will also be without star striker Erling Haaland who completed a move to Manchester City.

It won’t be an easy start for Dortmund who face a Leverkusen side that finished five points behind them in third position last season.

Meanwhile, RB Leipzig travel to Stuttgart on the opening weekend of the campaign, while promoted sides Schalke and Werder Bremen face tough away trips at Cologne and Wolfsburg respectively.

There will also be an opening weekend derby between Union Berlin and Hertha BSC, while Cologne welcome Schalke and Borussia Monchengladbach host Hoffenheim.

The other opening fixtures include VfL Bochum facing a home game against Mainz and FC Augsburg will host SC Freiburg.

Dortmund will host Bayern in the first Der Klassiker of the new season on Oct. 8 at Signal Iduna Park.