After landing the best European free agent out there in Andrei Kuzmenko, what other fun things does Vancouver Canucks general manager (GM) Patrik Allvin have up his sleeve? A mega-trade involving J.T. Miller or Brock Boeser perhaps? Or maybe a smaller deal that gets Tyler Myers, Tucker Poolman, Tanner Pearson or Jason Dickinson off the books? Whatever the case, the new man at the controls has gotten his tenure off to a good start with the successful pursuit of Kuzmenko. Now fans and pundits wait for his next move.

Could it come in the form of a trade with the Carolina Hurricanes? Jim Rutherford, who was president and GM of the Canes for the better part of 17 seasons between 1997 and 2014, knows the franchise well, so it is definitely not out of the realm of possibility. More so now that Darren Dredger threw them out as a possible suitor for J.T. Miller on a recent edition of TSN’s Insider Trading. So, in the spirit of that, let’s take a look at a couple of players the Canucks could have an eye on whether it be in a potential Miller trade or otherwise.

With Seth Jarvis graduating from a prospect to a legitimate NHL player with tremendous upside as a first-line winger, Martin Necas could become expendable. Add in the fact that head coach Rod Brind’Amour believes the Hurricanes do not have any elite goalscorers, and GM Don Waddell could be looking outside the organization to find some this offseason (from ‘Hurricanes’ lack of elite goal scoring exposed in Game 7 loss to Rangers’, The Athletic, 5/31/22). Enter Miller, who had a career-high 32 goals and 99 points in 2021-22 and is a five-time 20-goal scorer. In fact, they could even look at a younger option in Boeser, who has four 20-goal seasons under his belt and is firmly in his prime at 25 years old.

If the Canucks do trade Miller or Boeser, they are believed to be looking for young forwards/defencemen rather than draft picks, so Necas would fit that criterion. The 23-year-old Czech scored 14 goals and 40 points in 78 games last season, which was one off the career-high he set in 2020-21. According to Dobber’s Frozen Tools, he played mostly on a line with Vincent Trocheck and Andrei Svechnikov but was deployed largely in a secondary role, especially after Jarvis became an impact player in the top six.

The Canucks don’t only need more young players, they also need more centermen and Necas could fill that role as well. While he was primarily used as a winger in Carolina, he is a natural pivot. If they can develop him as an elite center in the NHL, he could join Elias Pettersson and Bo Horvat as a formidable three-headed monster down the middle. Not only can he skate like the wind, but he also has impressive playmaking skills and size (6-foot-3, 191 pounds) to potentially anchor a dangerous third line with Nils Hoglander and Andrei Kuzmenko – if he doesn’t catch on in the top-six, that is. He would, of course, make the second power-play unit dangerous as well.

Selected in the second round by the Hurricanes in 2021, Scott Morrow is exactly what the Canucks need more of when it comes to prospects that patrol the blue line. Being a right-hand shot with size (6-foot-2, 194 pounds) and mobility, he would make an excellent addition to a pool desperate for more skill and speed.

The Canucks’ revamped front office wants a team that plays with pace and spends less time in their own zone. Morrow would help further that goal as he is an excellent skater with a great first pass who isn’t afraid of jumping into the play to create a scoring chance. Here is what THW’s own Dayton Reimer had to say in his prospect profile heading into the 2021 Draft.

“He’s [Morrow] an elite, fluid skater, which, when paired with his size, strong edgework, and agility, makes him very difficult for attackers to get around. He is aggressive in the neutral zone, attacking his opponents and closing out their line of sight before they can get in a spot to take a shot.” 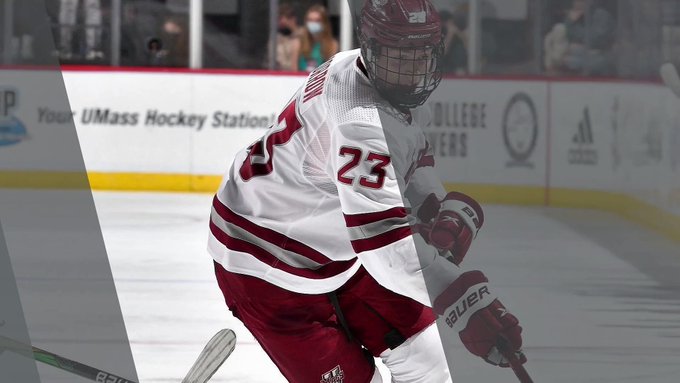 After graduating from Shattuck St. Mary’s with eight goals and 48 points in 30 games and playing six playoff games with the Fargo Force in the United States Hockey League (USHL), Morrow started his freshman year at UMass in the NCAA. By the end of the 2021-22 season, he had an impressive 13 goals and 33 points in 37 games, which earned him several honors including being named to the Hockey East’s First All-Star, First All-American and All-Rookie teams. He also helped lead UMass to a Hockey East Championship.

Before the 2021 Draft, one of the things scouts noted was his lack of defensive game, which UMass head coach Greg Carvel saw a massive improvement in as the year went on.

“He has a very good hockey IQ…He sees all of it. He knows exactly where he needs to be better. He’s doing a good job, he’s just got to move his feet, he’s got to just get experience in different situations…He’s a really smart player…He’s coming along very quickly. His offensive game is coming along very quickly as well. He’s a pleasure to coach. He’s a very gifted player.”

Similar to Quinn Hughes when he first started in the NHL, all Morrow needs is time to develop that defensive game. The offensive instincts and elite skating are already there, which cannot be taught. Like I’ve said in the past, the Canucks need to find more defencemen in the same vein as Hughes, great skaters who have a knack for moving the puck out of their own end quickly and efficiently. Adding Morrow in a trade involving Miller or Boeser would do just that.

As the 2022 Draft and free agency get closer and closer, more trade rumors will swirl around the names of Miller and Boeser. Every team under the sun will be interested in one or both of these premium assets at some point, so it’s up to the Canucks to get the best deal possible.

Especially when it comes to Miller, who should bring in not only a first-round pick but some high-end young players or prospects too. All in all, it will be an interesting couple of weeks around the city of Vancouver as fans await the first major move of Rutherford and Allvin’s tenure in the Canucks front office.