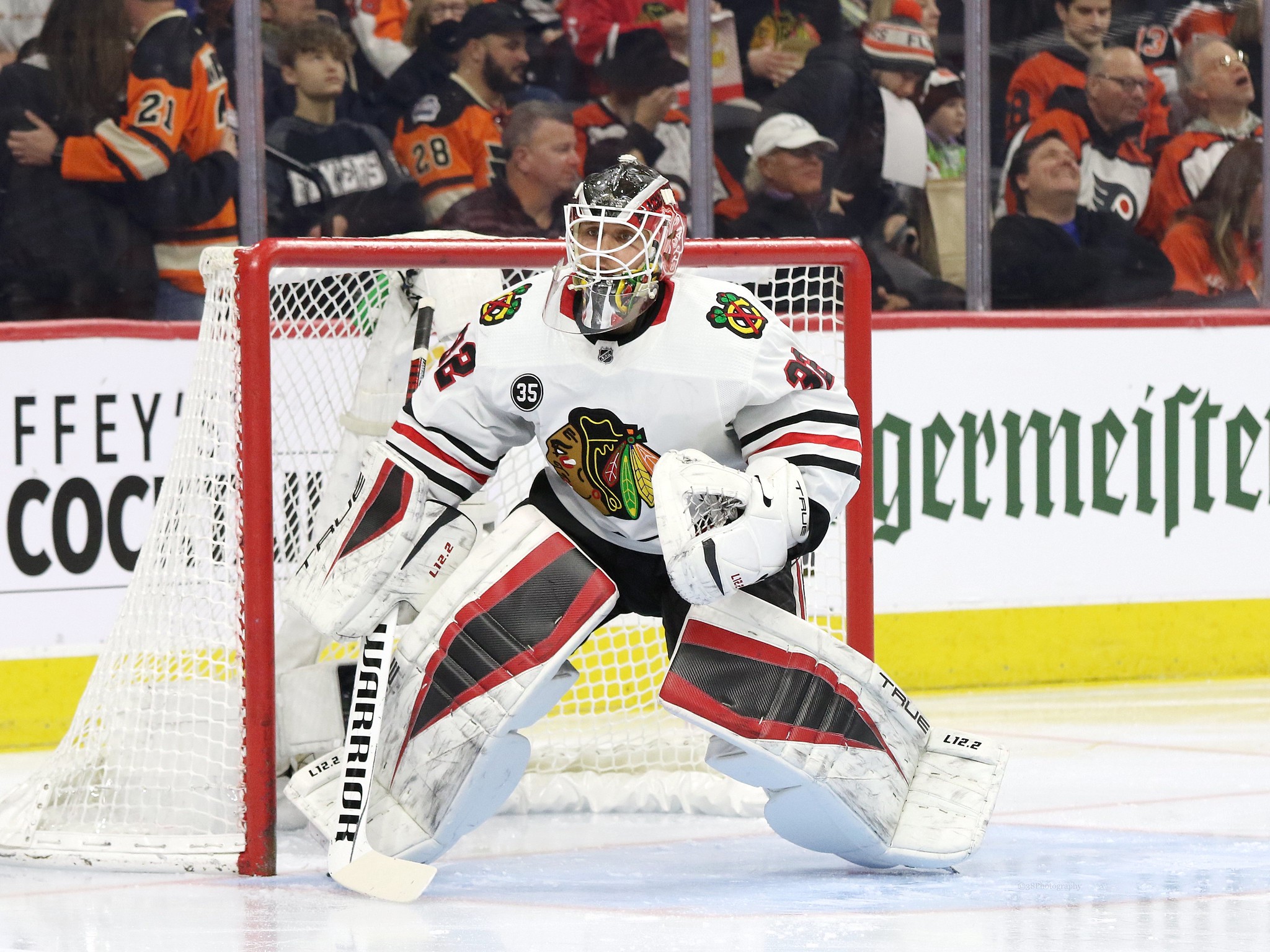 Safe to say, things didn’t go to plan for the Chicago Blackhawks throughout the 2021-22 season. From the multitude of moves that management forced last offseason in an effort to expedite their rebuild, the only result that mattered was that they missed the playoffs. While all parties involved should share the blame when a team fails as a collective, it’s natural to be drawn to their results in net.

Having had four goalies suit up for the Blackhawks, the fact that none were able to end the campaign with a winning record suggests a fairly accurate summary of that story.

With the smallest sample size of the group to assess, Arvid Söderblom was only able to get into three games as a Blackhawk throughout 2021-22. That said, though, that he earned his opportunities speaks to the type of year Söderblom had as compared to many others in Chicago.

Söderblom was scouted from overseas last offseason, following an impressive campaign in the Swedish Hockey League.

Letting him take the reigns with the Rockford IceHogs made sense, which is exactly what Söderblom did this past year. He accumulated the most games played, the best goals-against average (GAA), and the highest save percentage (SV%) of any IceHogs goalie. Play that proved he was the right name to call up when the Blackhawks needed such support.

An NHL stat line that includes a record of 0-2-0, .863 SV%, and 5.01 GAA, doesn’t do justice to Söderblom’s debut performances with Chicago. The fact is, he was thrown into a burning fire at times that the flame was far from being doused.

Yet, all in all, the newcomer still held his own and looked like he belonged. Fans can allow themselves to be excited about what this means for Chicago’s future in net, as Söderblom should certainly get more action in the years to come. With more games played, through the success he’s due to achieve, his stats will adjust accordingly.

Following a confusing year through 2020-21, in which Collin Delia was forced into a hiatus for most of Chicago’s schedule, it’s not as though he should have expected to get into many more games through 2021-22 given the Blackhawks’ goalie situation to start the season.

Delia’s campaign was very much focused on development, as he spent a good portion of it in Rockford. To his credit, he won half of the games he played in the American Hockey League (AHL). Unfortunately, that pattern didn’t translate in the same manner when he was called up to Chicago.

Having found his way into 32 games with the Blackhawks since 2017-18, Delia’s numbers have failed to progress in the right direction. In fact, his stat line through 2021-22 was his worst since he debuted. As an unrestricted free agent (UFA) this offseason, it’s difficult to assume he’ll find his way back into the Blackhawks locker room any time soon.

Safe to say, the Blackhawks thought they found their next No. 1 when Kevin Lankinen thrust onto the scene in 2019-20. One of the most impressive rookies throughout the league, Lankinen was keeping the Blackhawks involved in a playoff picture they had no business being drawn into. Ultimately, the entire team’s efforts fizzled collectively, but things would have been much uglier had it not been for the performances they were enjoying between their pipes.

Fast forward to that offseason, when the Blackhawks decided it wasn’t good enough that their plans were progressing as effectively as they already were. Rather than letting Lankinen regain his role as their go-to starter, Chicago went out and acquired a future Hall of Famer to really confuse matters.

Yet, Lankinen appeared to be reacting to the revised role perfectly. Besides, this was an opportunity few in Lankinen’s position would get throughout their careers, so suiting up behind one of the game’s best was certainly far from the worst thing for his progression.

Unfortunately, Lankinen wasn’t able to impress in quite the same manner with the opportunities he was granted throughout 2021-22. While it could very well have been that the lack of playing time hindered his ability to maintain any type of momentum, unlike what he was able to craft from being overplayed the season prior, ending the year with a record of 8-15-6 just wasn’t going to make the same type of splash.

Despite his 3.50 GAA and .891 SV%, Lankinen’s showing the year prior earned him the benefit of the doubt. As this team reverts to a more cognizant rebuild, Lankinen can be a reliable presence that keeps them competitive. We’ve yet to see his best.

When a franchise targets the most recent Vezina Trophy winner, their anticipated outlook becomes a lot more obvious. Infusing Marc-André Fleury into their fold furthered Chicago’s goal of making their 2021-22 run a more meaningful one. You don’t sign a goalie of Fleury’s calibre to anticipate mediocre results.

Unfortunately, Fleury wasn’t even providing that level of play to kickstart his time in Chicago. As the organization was experiencing record-setting results in all the wrong ways, Fleury’s numbers aligned.

Having gone 1-7-0 at the start of the season, it should come as no surprise that Fleury had only stopped 215 of the 244 shots he’d faced, as he averaged a GAA of over 3.60 throughout that span. Although that stretch didn’t bode well for his reputation as a Blackhawk, he would inevitably return to form and even make the right type of history along the way.

In fact, Fleury went on to win eight of his next 11, achieving a .935 SV% and two shutouts within that sample size alone. From what could have been a start that suggested there was no possible way to rebound, Fleury did what he does best and prevailed.

Unfortunately, though, the rest of Chicago’s efforts didn’t elevate in quite the same manner. Before being traded to the Minnesota Wild, Fleury’s numbers as a Blackhawk included a record of 19-21-5, a 2.95 GAA, a .908 SV%, and four shutouts. Stats that were far more in line with the all-star’s career averages.

While it could be argued that these metrics aren’t overly impressive when isolated, what makes them so is the extremes Fleury had to reach within his 45-game run in Chicago. That he was able to essentially erase that sluggish of a start from his stat line is worth more than just a passing grade.

Blackhawks Have to Look Ahead

Reflecting back on the year that was is only part of the process for any franchise looking to progress in the ways that Chicago has to. Especially when their locker room will be occupied by such a different cast of characters next season.

It’s not as though the Blackhawks can bank on building from the momentum Fleury was able to string together mid-way through the season. What they can focus on, though, is giving Lankinen his net back so he can do with that opportunity what we all witnessed he was able to just a couple of short seasons ago. First, though, the Blackhawks need to re-sign him.

Speaking of free agents, Delia might not find himself in the same type of scenario. Unfortunately, a mutual fit just hasn’t been established nor does he appear to be part of Chicago’s future plans. Unlike Söderblom, who has already showcased his capabilities on North American ice and should be expected to remain for the foreseeable future.

RELATED: Marc-Andre Fleury’s Case as a Hall of Famer

All in all, the 2021-22 campaign was far from a successful one for the entire organization. Including their netminders. However, those that will likely remain were at least able to give fans some sense of optimism when it comes to what they can expect out of these goalies if they are prioritized in the way they should be through 2022-23.

Freelance thinker, paying too much attention to digital aesthetic. Oxford comma enthusiast. Spider-Man supporter. Sports fan, with two favourite hockey teams. If the Blackhawks and Maple Leafs ever meet in the Stanley Cup Final, you can find me wherever they’re playing that night.

Find me and more of my work at mralwayswrite.com and find me at @MrAlwaysWrite.