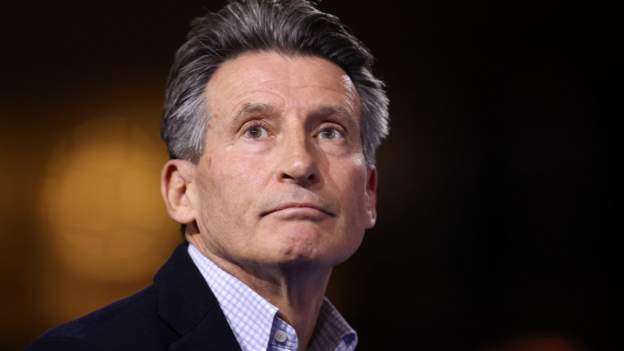 The landmark decision set swimming apart from almost all other Olympic sports, with most using testosterone limits as a basis for inclusion.

But Lord Coe has now revealed that World Athletics is set to discuss adopting a new eligibility policy, and welcomed Fina’s move.

“We see an international federation asserting its primacy in setting rules, regulations and policies that are in the best interest of its sport,” he told BBC Sport.

“This is as it should be. We have always believed that biology trumps gender and we will continue to review our regulations in line with this. We will follow the science.

“We continue to study, research and contribute to the growing body of evidence that testosterone is a key determinant in performance, and have scheduled a discussion on our regulations with our council at the end of the year.”

What is the background?

Under Lord Coe, World Athletics has already introduced rules that cap testosterone levels at five nanomoles per litre (5nmol/L) for transgender athletes and for competitors with differences in sex development (DSD) in some women’s running events.

And with the International Olympic Committee (IOC) recently placing responsibility on individual federations to determine eligibility criteria of their own, other sports are now bringing in tougher policies.

Last week, cycling’s world governing body the UCI lowered the permitted testosterone level from 5nmol/L to to 2.5nmol/L, and doubled the period of time before a transgender rider can compete to two years.

But Fina has now gone further after a report by a scientific panel said that going through male puberty meant trans women retained a “relative performance advantage over biological females”, even after medication to reduce testosterone.

It is only the second Olympic governing body, after World Rugby in 2020, to introduce a ban on transgender competitors, but it now looks increasingly likely that track and field could follow suit.

“But when push comes to shove, if it’s a judgement between inclusion and fairness, we will always fall down on the side of fairness – that for me is non-negotiable.

“The integrity of women’s sport is really, really important here, and we can’t have a generation of young girls thinking there is not a future for them in the sport. So we have a responsibility…maintaining the primacy and the integrity of female competition is absolutely vital, and that’s why we were at the forefront of tabling those regulations that allow as close as you can get to a level playing field.

“Those regulations are always under review… if there are events, distances or disciplines that we think are being unfairly impacted we will of course look at those again in the light of the science.”

Fina’s new policy means transgender American college swimmer Lia Thomas, who has expressed a desire to compete for a place at the Paris Olympics, is now blocked from participating in the female category at the Games.

The governing body says it will aim to establish an ‘open’ category at competitions for swimmers whose gender identity is different than their birth sex.

Its policy does not apply to national federations or the US college championships, the NCAAs, at which Thomas recently won the women’s 500-yard freestyle. Instead, each national federation – including British Swimming – will need to decide whether it is to implement the Fina policy.

British Swimming told BBC Sport it would “take time to review [the policy’s] content” before making any further comment.

With the debate around the inclusion of transgender women among the most contentious in sport, Fina’s decision has already divided opinion.

Former GB swimmer Karen Pickering told BBC Radio 4: “I empathise that there will be people who now can’t compete in the category that they identify with as their gender. That is very sad and I do understand that, but in this situation inclusivity and fairness cannot be compatible and the science has shown that there is just no way to make that compatible.”

Four-time Olympic champion Cate Campbell – who had addressed the governing body’s members before the decision was made – asked them to “uphold the cornerstone of fairness”.

However, fellow Australian swimmer Maddie Groves has criticised Campbell’s comments, asking on Twitter whether she was “OK with ostracising an already marginalised group?”

A spokesperson for LGBT rights body Stonewall said: “In sport, inclusion should always be the starting point. Everyone deserves to benefit from the sense of wellbeing and community that sport brings – and that includes trans people.

“The inflammatory rhetoric surrounding the issue of trans inclusion in elite competition only serves to perpetuate an atmosphere where trans people feel unwelcome to play community sport with friends, or go to the gym.

“Trans inclusion in sport is a complex, evolving field that requires nuanced, evidence-based discussion. A discussion weaponised by those that seek the total removal of trans people from public life does not serve sport or trans people well.”

Meanwhile, US women’s football star Megan Rapinoe, one of the most influential voices in sport, has said she is “100% supportive” of trans inclusion.

“Show me the evidence that trans women are taking everyone’s scholarships, are dominating in every sport, are winning every title. I’m sorry, it’s just not happening,” she told Time magazine.

“I have confidence that we can figure it out. But we can’t start at the opposite. That is cruel. And frankly, it’s just disgusting. We’re putting everything through ‘God forbid a trans person be successful in sports.’ Get a grip on reality and take a step back.”