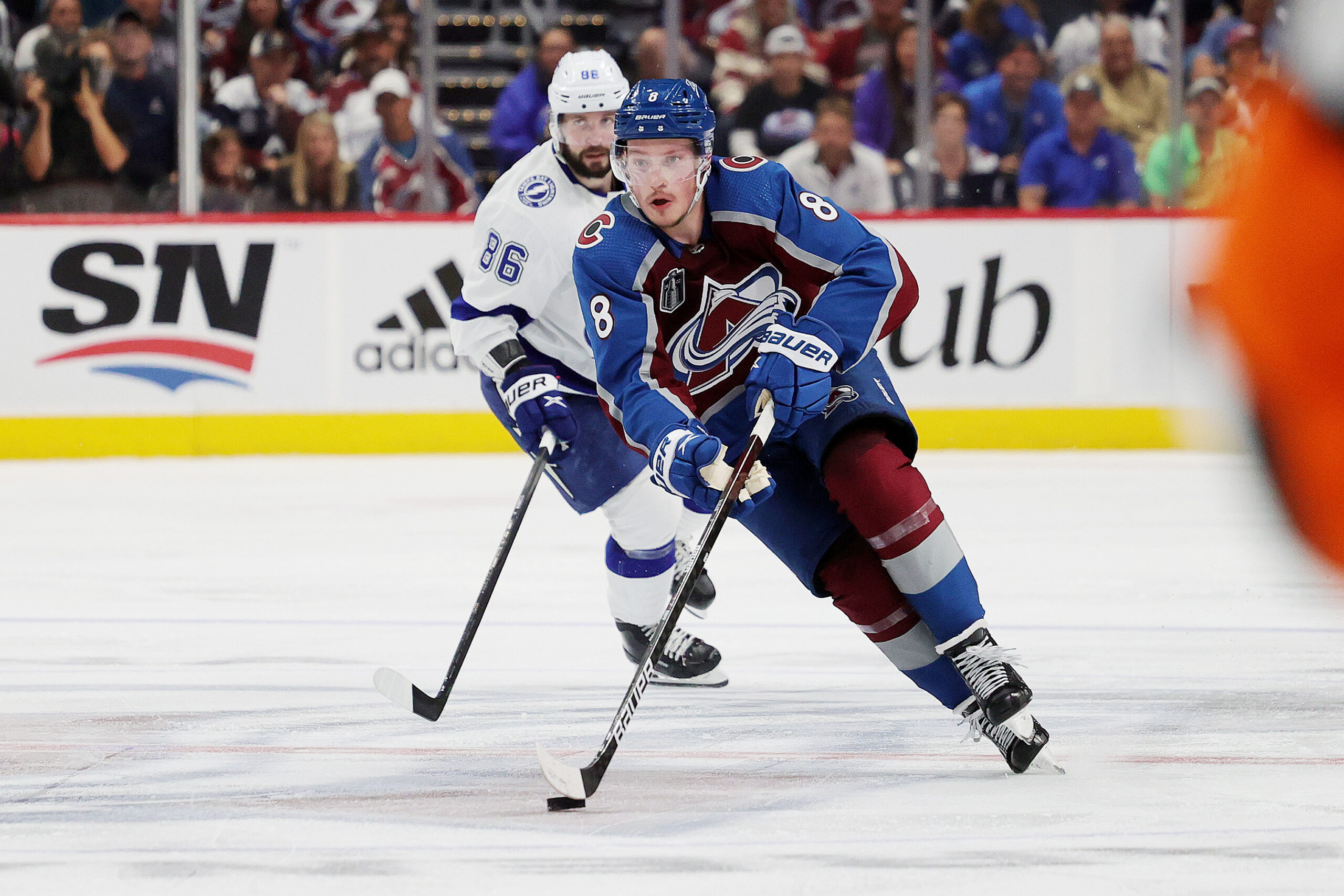 As the 2022 Stanley Cup Final between the Colorado Avalanche and the Tampa Bay Lightning is already several games old, it’s an appropriate time to handicap the race for the Conn Smythe Trophy, awarded annually to the playoff MVP. Given that the honour is rarely given to a player on the losing team, the result of the series will have an enormous bearing on the recipient. Even so, multiple individuals have separated themselves from the pack, forming the nucleus of my five-man shortlist. Without further ado, let’s dig into the contenders.

When a player is in the process of a historic playoff campaign, it’s difficult to place them anywhere but at the top of the list. Not only is Cale Makar third in points during this postseason with 26 in 17 games, but his 1.53 points per game (P/G) rank fourth all-time at his position (minimum eight games). Only Paul Coffey, Bobby Orr, and Paul Reinhart have enjoyed more productive playoffs in NHL history, but those three had the luxury of playing in the higher-scoring 1970s and 1980s. The Avalanche currently lead the series 2-1, so Makar can only play a maximum of four additional games this postseason, making it unlikely he challenges Coffey for the single-postseason record (37 points). Still, the 23-year-old rearguard has thrust himself into the NHL’s upper echelon, and it’ll be tough to knock him off his perch.

Away from the box score, Makar’s underlying numbers are pristine. The Avalanche star is playing over 26 minutes a night (over two on the penalty kill) and directing the run of play in Colorado’s favour. The team accounts for 59.7% of expected goals (xGF%), 62.8% of shots (SF%), and 65.5% of scoring chances (SCF%), and has outscored opponents 24-17 at 5v5 with Makar on the ice. The young blueliner is getting the best that opponents can throw his way, and handling it with ease. Unless he goes cold for the remainder of the series, the Conn Smythe is Makar’s to lose.

From his playoff debut in 2014 to 2021, no one has scored more points during the playoffs than Nikita Kucherov, whose 127 points in 113 games are 41 more than the next best skater (Sidney Crosby). As a result, it’s no surprise that the Russian dynamo is once again leading the Lightning as they strive for a third consecutive title, and adding to that mind-boggling lead. His 26 points in 20 games are tied with Makar for third behind the Oilers’ superstar duo, with Ondrej Palat and his 19 points the second-best mark for the defending champions. After some notable postseason slip-ups, Kucherov has fashioned a reputation as a big-game player.

Kucherov also sits tied for second in primary assists (14), and shots (67), and is fourth in individual expected goals (ixG) and scoring chances (69). The 2018-19 Hart Trophy winner is the engine which propels the Lightning machine, and his performance through three and a half rounds is a testament to that identity. He’s had a relatively tame Stanley Cup Final (three points in three games) but if anyone can erupt for a couple of multi-point performances, it’s him.

Since making his playoff debut in 2014, only Connor McDavid and Leon Draisaitl have produced at a higher rate than Nathan MacKinnon. His 89 points in 67 games represent the fifth-highest total in that time, lending credence to the idea that the Avalanche superstar is a big-game performer. He only sits ninth in overall scoring in these playoffs (20 points in 17 games) but that relatively low scoring clip isn’t due to a lack of trying.

According to Natural Stat Trick, MacKinnon leads all players in shots with 96 (29 more than Kucherov in second) and ranks first in ixG and individual scoring chances (iSCF) in all situations. On top of his absurd rate of shot- and chance-generation, he’s tilted the ice at 5v5 whenever he takes the ice. The Avalanche have controlled 63.5% of SF, 62.6% of xGF, and 65% of SCF, all among the best marks in these playoffs. His teammate might be getting most of the plaudits, but the Avalanche center is crafting yet another impressive postseason outing. Still, unless he erupts over the rest of the series, the two players ahead of him currently have stronger cases for the Conn Smythe.

By his lofty standards, Andrei Vasilevskiy saw his 2022 Playoffs get off to a dismal start against the Toronto Maple Leafs. Over seven games in the Lightning’s first-round series, he posted a .897 save percentage (SV%) and a minus-0.3 goals saved above expected (GSAx), far from his best. Since stymying the Maple Leafs in Game 7, Vasilevskiy has been borderline impenetrable. His .931 SV% and plus-6.73 GSAx over the next three rounds point to a goaltender shaking off some rust, and regaining his composure at the most important time of the year.

Vasilevskiy’s record in elimination games is well known, and he must deliver more of the same for the Lightning to fashion a comeback against this imposing Avalanche group. His 2022 Playoffs stat line offers a .920 SV% (fifth among goalies with at least four games played) and a plus-7.05 GSAx (third), once more submitting a performance worthy of a third-straight Stanley Cup win. He’s yet to reach the heights he exhibited in the previous two title runs, but there is still some runway for the Russian netminder to climb up the rankings with several more stonewall displays.

After a stellar regular season in which he paced the Avalanche with a career-high of 36 goals and 92 points, Mikko Rantanen was uncharacteristically snake-bitten during Colorado’s first two series. He failed to tally any non-empty net goals against the Nashville Predators and St. Louis Blues and entered the Western Conference Final with 11 points in 10 games. Fortunately for the Avalanche, the Finnish winger recovered his scoring touch in time to help pull the team to their first appearance in the Stanley Cup Final since 2001.

Since the start of the third round, Rantanen has scored 13 points in seven games (four goals and nine assists), tied for first over that span with Makar. As a whole, his 24 points in 17 games rank sixth in playoff scoring, and his 19 assists are good for third among all skaters. In addition to his offensive contributions, the 25-year-old forward has been a steady defensive presence for the Avalanche. He ranks seventh among all skaters in takeaways (18) and leverages his massive frame to separate opponents from the puck and disrupt their offensive zone schemes. He looks to be peaking at the most opportune time, and significant showings over the final games of the series could rocket him up the rankings.

Unsurprisingly, this series boasts an array of superstars enjoying productive postseason campaigns, each one worthy of consideration for the Conn Smythe. Yet, what Makar has accomplished during the 2022 Playoffs is almost unparalleled in NHL history, and elevates him above the other potential contenders. It’s possible that one of the other four listed players singlehandedly commandeer the rest of the series, but the Avalanche defenseman has established enough of a cushion to stave off any would-be challengers. However the rest of the Cup Final unfolds, he is the frontrunner to be crowned the 2022 Playoffs’ most valuable player.

Data courtesy of Evolving-Hockey, Natural Stat Trick, and the NHL.

Marko is an aspiring sportswriter with a passion for crafting stories while using a combination of the eye-test and (shudder) analytics, which is complemented by an academic background in criminology and political science.

When not covering the Colorado Avalanche and Pittsburgh Penguins for The Hockey Writers, he can also be found pouring countless hours into various sports video games franchises, indulging in science fiction novels, and taking long runs around his neighbourhood.

Marko can be reached through his personal blog at unexpectedgoals.ca, and you can yell at him by following him on Twitter and other social media seen under articles like this one.