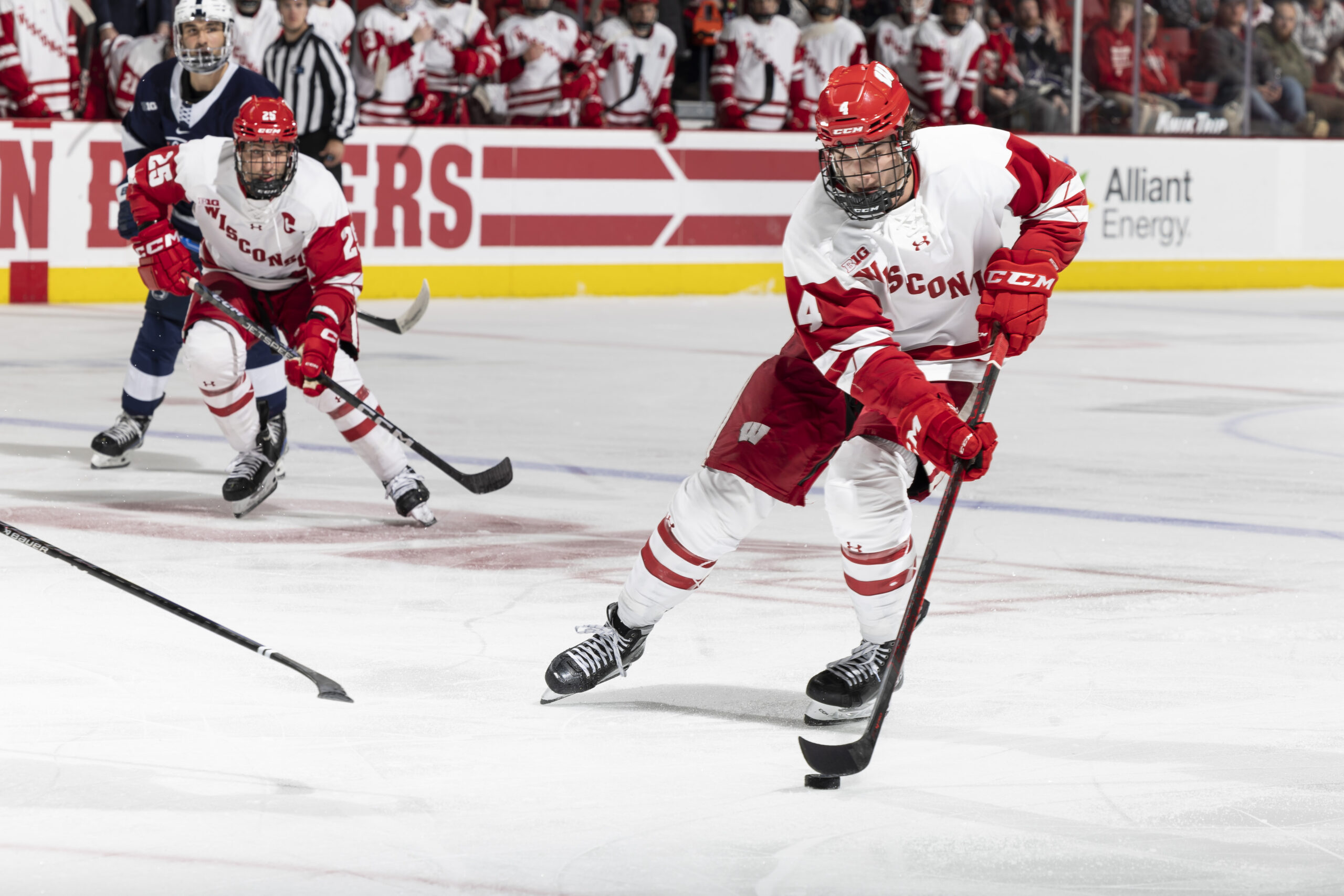 The Columbus Blue Jackets have had an exciting influx of young talent in recent seasons. The story this season has been about Kent Johnson, but Cole Sillinger, Liam Foudy, and Adam Boqvist all signify a bright future for the organization.

The trail doesn’t end there. The Blue Jackets have a pipeline that reaches 13 different leagues around the world that features former first-round picks, late-round selections, and players forging a path against European competition, trying to prove they are worth an NHL contract.

Numerous players on the Blue Jackets, including Johnny Gaudreau and Zach Werenski, came from the NCAA. Below we will look at the top four Blue Jackets prospects in the NCAA, all defensemen, and see how they are doing in the 2022-23 season.

The 6-foot-2, 198-pound defenseman from the University of Wisconsin is the highest-rated NCAA prospect in the Blue Jackets organization, ranked 16th. He is a former first-round pick, selected 25th overall in 2021, and is in the midst of his sophomore season with the Badgers.

Ceulemans has five points in eight games, including one goal, this season. That puts him at a similar pace of production to his 2021-22 season, which saw the blue-liner contribute 22 points in 34 games.

He has been a bright spot on a Wisconsin team that has stumbled out of the gate in the competitive Big Ten conference, but the two victories were against perennial powerhouse Minnesota-Duluth, so hopes remain high for the Badgers. Ceulemans contributed four points in that series, a sign that he can step up when needed.

The 19-year-old has continued to produce at the Division I level and looks like a favorite to make Team Canada’s roster for the World Junior Championships.

The 6-foot-3, 179-pound defenseman for the University of Vermont is a veteran of the NCAA. He is in the midst of his fifth season, his second with the Catamounts after three years with the University of Minnesota, and figures to be a contributor in his super senior season.

Stucker is ranked 24th in the Blue Jackets’ system as a former seventh-round pick from 2017. In 2022-23, he has two points in six games for the Catamounts (2-4-1). He is coming off a 14-point campaign (4 goals, 10 assists) in 2021-22, which was a breakout season for him, and Columbus fans should keep their eyes peeled to see how the 24-year-old progresses toward cracking Columbus’ roster.

The 6-foot-2, 174-pound defenseman for the Providence College Friars is currently in his sophomore season and ranks 29th in the Blue Jackets system. The former fourth-round selection from 2021 has contributed one point in seven games in 2022-23. However, the 19-year-old was productive as a freshman, so the slow start might just be a slump.

Richard contributed 14 points in 36 games for the Friars in 2021-22 and is considered a play-killer and strong in the defensive zone.

The Friars have a 4-2-1 record this season and earned a big win over then-eighth ranked Northeastern University. Providence was competitive against the defending national champion Denver and is ranked 14th in the country.

It will be interesting to see how Richard develops as the season continues and if he can gain playoff experience with a Friars squad that is trending upwards.

The 5-foot-11, 179-pound defenseman for the Boston College Eagles is the third sophomore on this list and is ranked 33rd in the Blue Jackets system. He is a former third-round pick from 2021.

In his freshman season, Hreschuk scored eight points in 37 games for BC with a plus-9 rating. He has also been involved with the U.S. National Development Program and was originally drafted by the Carolina Hurricanes. He was acquired by Columbus in the Max Domi trade. This season, he is pointless in the Eagles’ first six games.

The Eagles have started the season 2-3-1 with both wins coming against New Hampshire. They have a few highlight matchups ahead, including the “Jerry York Game” against Boston University on Dec. 9, and the Frozen Fenway matchup against UMass Amherst on Jan. 7. These contests should have good television exposure and could present an opportunity for Blue Jackets fans to get a glimpse of Hreschuk.

These four collegiate defensemen receive significant playing time, which will be a great help in their development. Ceulemans has the highest pedigree and potential, but all four have a shot at the Blue Jackets’ lineup in the near future.

As the pro team looks to rebound in Finland this weekend, keeping an eye on Ceulemans, Stucker, Richard and Hreschuk should be on the docket as well. Stucker will look to contend in camp for next season, while the latter three will be evaluating whether to turn pro next year or continue the collegiate route. With a long season ahead, these prospects have a lot to prove.

Jack is a Columbus Blue Jackets writer at THW and will provide NCAA coverage as well. He is a graduate of Northwestern University and Ithaca College. He enjoys covering Hockey, Baseball, Football, Golf, Tennis and many other sports.