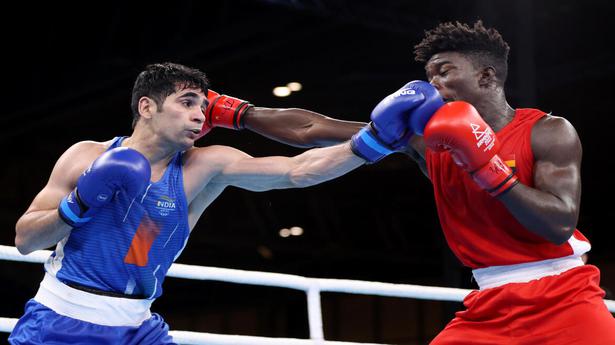 Rohit Tokas made a fine start to his Commonwealth Games campaign as he outsmarted Alfred Kotey 5-0 in a men’s 67kg pre-quarterfinal contest at the boxing arena on Tuesday.

Olympian Ashish Kumar also posted a thumping 5-0 victory over a more experienced Travis Tapatuetoa of Niue in the round of 16 to advance to the men’s 80kg quarterfinals late on Monday night.

Tokas, who celebrated his 29th birthday on Monday, was taken by surprise as he was served a standing count early in the first round.

He regained composure to tackle the Ghanaian southpaw well and delivered some lusty blows to return the favour and take the first round with a 4-1 verdict.

Tokas, a Kings Cup bronze medallist, used his feet well and landed hard right punches on Kotey to win the second round convincingly.

Even as Kotey stepped up aggression in the third round, Tokas boxed intelligently and surged ahead to emerge as the winner.

Tokas will meet Niue’s Xavier Mata’afa-Ikinofo in the quarterfinals on Thursday.

.Ashish, the taller of the two, rained powerful combinations on the cautious Tapatuetoa, who competed in the 2010 Delhi Commonwealth Games.

The Indian showed his jabs and uppercuts as he asserted complete supremacy to make all the five judges score 10-8 in his favour in the first two rounds.

Ashish set up a quarterfinal clash with five-time British national champion and Youth Commonwealth Games gold medallist Aaron Bowen, who got the better of Nigerian Innocent Ehwarieme 5-0, on Wednesday.