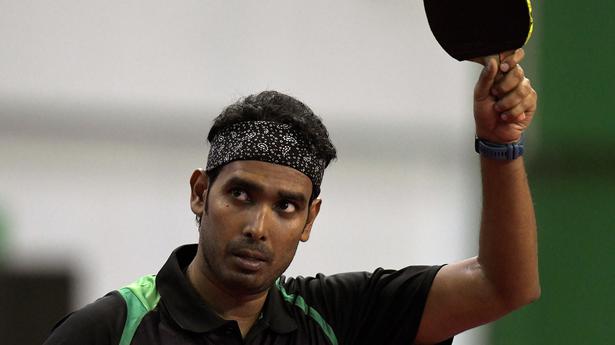 It took merely 49 minutes for the India men’s table tennis team to make short work of Barbados at the Commonwealth Games. Singapore, however, made India sweat for an hour and 18 minutes before surrendering to a 3-0 clean sweep.

Star paddlers Achanta Sharath Kamal and Sathiyan Gnanasekaran were pumped after an excellent first day of competitions at the National Exhibition Centre in Birmingham, which saw them enter the quarterfinals without much fuss.

“The entire team played really well. Singapore, in a group match, was a tricky draw. They are a good, young side. It is great to win in such a dominating fashion. The team is really in good shape now,” Sathiyan says.

“Really good way to start the tournament. The way Sathiyan and Harmeet (Desai) started off in the doubles gave me a lot of confidence before going in for the singles against Pang Yew En Koen. Earlier, I lost to him once, I had beaten him twice… there’s a little bit of history between both of us,” Sharath chimes in.

Sharath, in the second game against the World No. 117, was trailing 3-9, admitting that he was finding it a bit difficult to read his opponent’s service. However, he bounced back in remarkable fashion to bag eight consecutive points.

“It (the serve) was going off quite fast and then I figured out a way to compose myself and what I got to do. When I won the second set, from being 3-9 down to 11-9, it put me back on top,” the 40-year-old veteran says.

The duo has been put up in the NEC micro-village. Sharath thinks the concept of having multiple sites for makeshift Games villages is a welcome change. He said, “It’s different and good. We could just walk back to our rooms and not wait so long. I could also see some badminton players. They came in. It is quite accessible for everybody. That makes it a little bit closer, a bit warmer for all of us.”

Sharath, Sathiyan, Harmeet and Sanil Shetty will go up against Northern Ireland in a dead rubber on Saturday.

“It is a pretty long tournament. Very important to stay in good shape throughout. It is a very good start. We’ve been feeling really good,” Sathiyan, who is playing his first ever tournament in England, says.

The turnout at the table tennis hall, however, left much to be desired. “I need more people,” Sharath puts it bluntly. “It is good to play in front of a crowd, especially after (Covid).”

Before heading out of the venue, he joked, “We want medals. Don’t care which colour,” when asked whether his goal was to bring back more than one gold medal to the country.