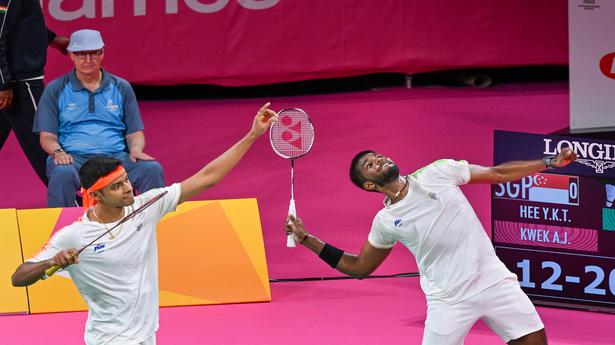 Defending champion India is set for the second consecutive showdown with Malaysia in the Commonwealth Games 2022 badminton mixed team final late Tuesday evening. Both teams have had a relatively straightforward path to the gold medal match. Malaysia hasn’t dropped a single match en route to the final. India conceded just one match when its women’s doubles pairing of Gayatri Gopichand-Treesa Jolly was upset 13-21, 19-21 by Australia’s Hsuan-Yu Wendy Chen and Gronya Somerville in its final Group A fixture.

That blemish seems to have been an aberration. Both teams are coming off 3-0 wins in the semifinals. Malaysia defeated England while India blew away Singapore to set up a repeat of the Gold Coast 2018 final, where India won its maiden mixed team gold with a 3-1 win.

So, are we in for a repeat? That will largely depend on how India’s doubles players perform. Here’s how the two teams stack up.

India will believe it has a point for the women’s singles in the bank. It will field top seed and Olympic medallist P.V. Sindhu. She has played two matches so far and blew away Singapore’s world no. 18 Jin Min Yeo 21-11, 21-12 in the semifinal. It will be a tall order for world no. 60 Goh Jin Wei, Malaysia’s designated women’s singles specialist, to beat Sindhu. The World no. 7 from India, who arrived in Birmingham fresh off her victory at the Singapore Open Super 500 win two weeks ago, should prove too strong for the Malaysian.

India will be confident to make it 2-0 by sweeping the men’s singles match. It will have the luxury of deploying either world no. 11 Lakshya Sen, fresh from a straight-game win over Singapore’s world no. 9 Loh Kean Yew, or world no. 11 Kidambi Srikanth, the hero of India’s Thomas Cup win in May. Lakshya is likely to face world no. 41 Ng Tze Yong in the final, given the World Championship bronze medallist has been India’s first men’s singles choice in the last three fixtures. The 20-year-old won all three matches in straight games.

Malaysia, however, will hope to pull things back in the doubles, where it possesses strong men’s, women’s, and mixed doubles pairings. The three-time champion, Malaysia, playing its fifth straight CWG final, will rely heavily on its strongest men’s doubles combo of world no. 6 Aaron Chia-Soh Wooi Yik, which enjoys a 4-0 head-to-head record against world no. 7 Satwiksairaj Rankireddy-Chirag Shetty. Their latest win came at the Asia Championships in April. But given the duo’s recent form, with both combinations winning their matches in straight games at the CWG, the match promises to go down the wire. A win for India would all but assure it the title – a fact that could put the Malaysians under pressure.

In women’s doubles, on paper, world no. 11 Pearly Tan-Thinaah Muralitharan will be far too tough for India’s world no. 38 Gayatri-Treesa. Also, the Indian combo losing a match to a lower-ranked Australian pair doesn’t bode well for the side.

Should things go as on paper, the fate of the gold medal could be decided in the mixed doubles. However, it will be interesting to see who India pairs up with Ashwini Ponnappa in mixed doubles. It was Satwik and Ashwini who plotted Malaysia’s downfall in Gold Coast by pulling off an upset against higher-ranked Chan Peng Soon-Goh Liu Ying. However, in the CWG 2022, India preferred the B. Sumeeth Reddy-Ashwini combination in the quarterfinals. While they were victorious then, the newly formed combination is likely to face a tough challenge as the two face either Tan Kian Meng-Lai Pei Jing or the combination of Chan Peng Soon-Cheah Yee See, who stunned world no. 11, Marcus Ellis-Lauren Smith, in Malaysia’s win over England in the semifinals.