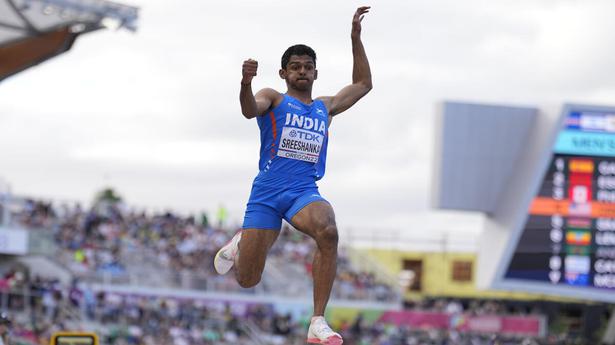 He might be kicking himself whenever he thinks of the missed chances at the recent World Athletics Championships but M. Sreeshankar does not show it out.

The national record holder (8.36m) began as one of the favourites for a medal at the Worlds. He became the first Indian long jumper to qualify for the final but could not raise the bar and finished seventh with 7.96m in Oregon.

“It was a good opportunity at the Worlds. I couldn’t properly connect the jumps in the final, made some mistakes technically,” said Sreeshankar, the No. 1 Commonwealth Games jumper, in a chat with Sportstar from Birmingham on Thursday evening.

The 23-year-old has shown what he is capable of in the last few years but he has not been able to reproduce the big jumps at the majors. He was seventh at the Indoor Worlds early this year, failed to make the finals at last year’s Tokyo Olympics and at the 2019 Worlds and was sixth at the 2018 Asian Games and under-20 Worlds.

“All small steps towards the big target…I am in the mix right now. Will do good here,” said Sreeshankar, this year’s joint World No. 2 with Greece’s Olympic champion Miltiadis Tentoglou and China’s World champion Jianan Wang.

Wang had a horrible year and had just one outdoor competition (7.67m), prior to Oregon. And the Chinese, who had a best of 8.03m till the fifth round, uncorked a massive 8.36m in his last jump to grab the Worlds gold.

Is Sreeshankar looking for such luck?

“Wang wasn’t lucky, he has been jumping good in the past too. He got his technique right at the right time,” said Sreeshankar.

Sreeshankar was one of the three Commonwealth jumpers to enter the Worlds final, the others being Australian Henry Frayne (12 th and last with 7.80m) and Jamaican Wayne Pinnock (ninth, 7.88m) but the latter does not figure in the Jamaican team for Birmingham. Frayne had won the silver at the last Commonwealth Games with 8.33m.

S. Murali, Sreeshankar’s father and coach, feels that it may not need a massive jump to hit gold in Birmingham.

“8.10m could bring the gold and silver and bronze could go for something between 7.92m and 8m. Competition will be good, there’s an Australian (Frayne), a South African and our own Muhammed Anees,” said Murali.