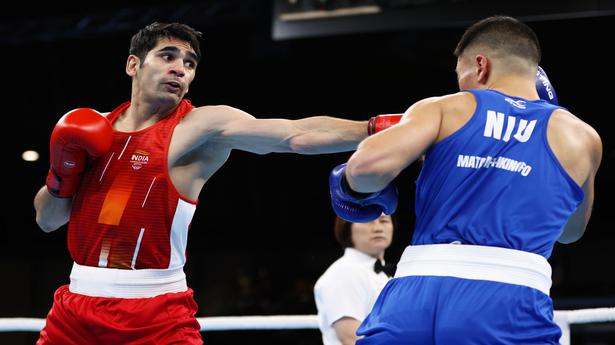 Rohit Tokas’ spectacular performance earned him a comprehensive 5-0 win over Niue’s Xavier Mata’fa-Ikinofo in a men’s 67kg quarterfinal bout and fetched him a place in the semifinals at the Commonwealth Games in Birmingham late on Thursday night.

It was a better-late-than-never moment for 29-year-old Tokas, who ensured his first medal in a major event and became the seventh Indian boxer to make it to the last-four.

The Delhi boy landed solid jabs and powerful combinations with his fast hands to bring a standing count for his opponent in the first round. The Niue boxer showed a lot of courage to challenge Tokas, who moved in and out nicely to deliver hard punches.

Tokas tweaked his strategy a little to deliver more jabs from a safe distance in the final round. Even though Xavier got one card apiece in his favour in the last two rounds, he could not stop the Indian from walking away with a unanimous decision.

A confident Tokas punched in the air to celebrate his performance even before the announcement of the result. He will take on Zambian Olympian Stephen Zimba, who defeated Uganda’s Isaac Owen Kibira 5-0, in the last-four.

Altogether seven Indians, including three women, will be seen in action in the semifinals on Saturday. They are Amit Panghal (51kg), Mohammad Hussamuddin (57kg), Rohit Tokas (67kg) and Sagar Ahlawat (+92kg) in the men’s section and Nitu Ghanghas (48kg), Nikhat Zareen (50kg) and Jaismine Lamboria (60kg) in the women’s section.