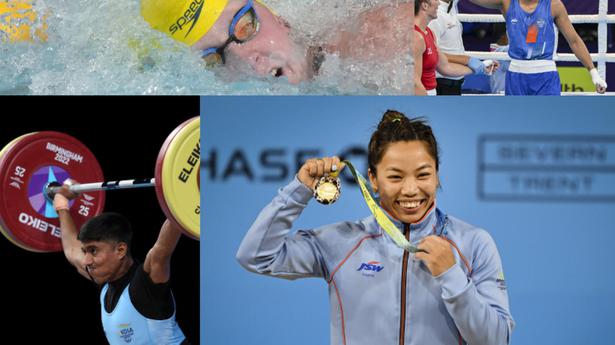 Here are the top 10 moments from the second day of the 2022 Commonwealth Games. Indian weightlifters ruled the roost, winning one gold, two silver and one bronze on Saturday.

As easy as they come

Mirabai Chanu of India after performing a Clean and Jerk during the Women’s Weightlifting 49kg Final on day two of the Birmingham 2022 Commonwealth.
| Photo Credit: GETTY IMAGES

Mirabai Chanu won India’s third medal at the 2022 Birmingham Games and the first gold in the Women’s 49kg Weightlifing event. Mirabai lifted a total of 201kg, equalling her Personal Best (88kg) in the Snatch with a successful lift of 88kg on her second attempt. She then lifted 109kg in her first Clean & Jerk attempt to seal the gold medal. She bettered her first attempt with a 113kg lift in the second. 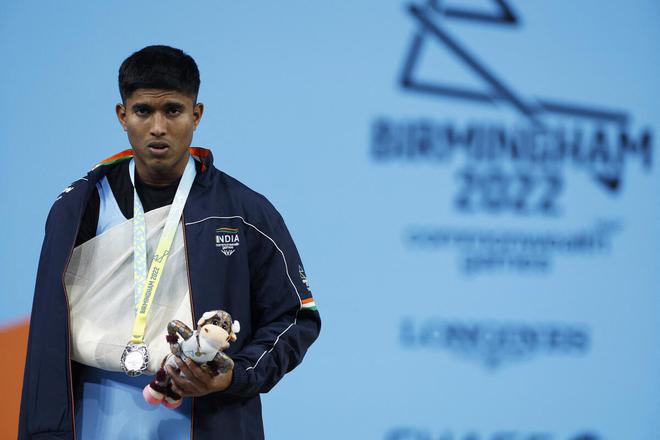 As Sanket Sargar stood on the podium, his right arm in a sling, tears rolled down his cheeks. He became India’s first medallist at the 2022 Games with a silver in the Men’s 55kg weighlifting event and a combined 248kg. Going for 139kg in his second clean and jerk attempt, Sargar winced in pain and dropped the barbell. He attempted the weight again but failed and grimaced before hobbling out of the arena. 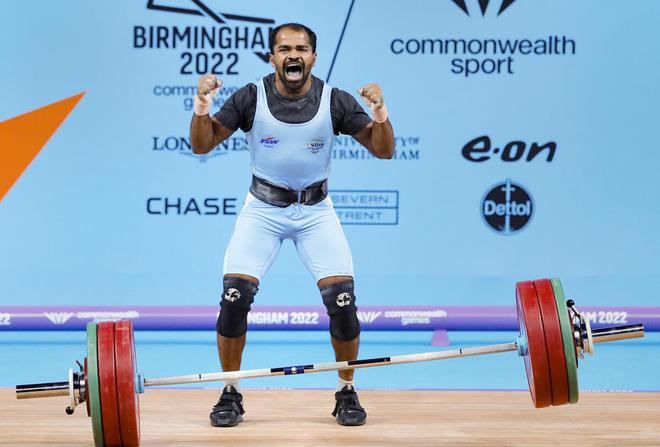 Gururaja Poojary braved a bout of sickness and pain in his knee and wrists to bring home India’s second CWG 2022 medal. He lifted a combined total of 269kg (snatch – 118kg and clean and jerk – 151kg) in the 61kg category for the bronze. Poojary had won the silver in the 56kg class in Gold Coast four years ago. He is not unhappy, though. For him, this win is more special given how “difficult” it has been after moving up in weight class.

Back to winning ways 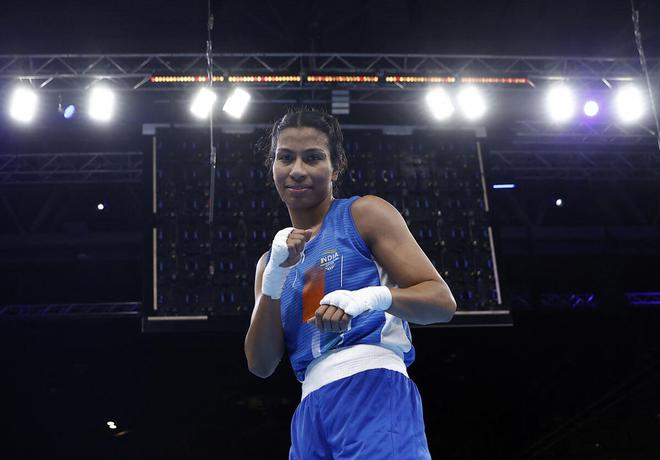 Lovlina Borgohain won her opening bout against New Zealand’s Ariane Nicholson to qualify for the Women’s Light Middleweight quarterfinals. The Tokyo Olympics bronze medallist won her Round of 16 bout with a 5-0 unanimous decision and returned to winning ways after being stunned in the pre-quarterfinals of the World Boxing Championships in May. Lovlina will face Wales’ Rosie Eccles, who is the 2018 CWG silver medallist, in her next bout. 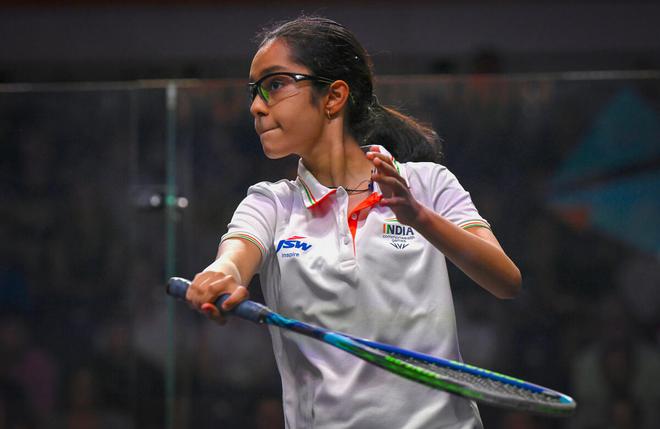 Indian squash prodigy Anahat Singh lost to Wales’ Emily Whitlock 1-3 in her Round of 32 match. But she gave another glimpse of her talent when she took the third game off the World No. 19. The 14-year-old Anahat, the youngest member of the Indian contingent at this CWG, had made a splash on her Games debut when she beat Jada Ross of St. Vincent and the Grenadines 11-5, 11-2, 11-0 on Friday.

The Games have a World Record 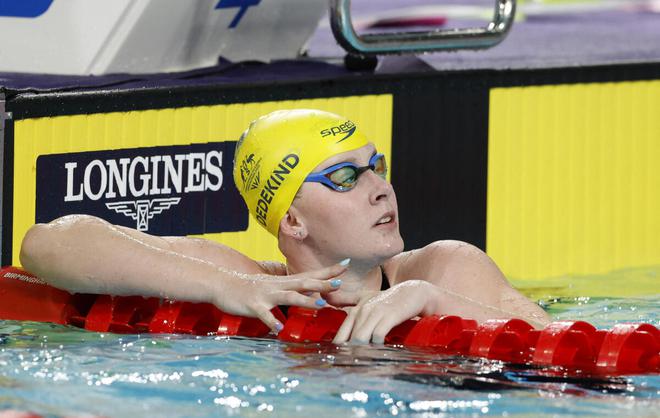 The Birmingham Games saw the first World Record being set under their banner when Katja Dedekind of Australia clinched the gold in the Women’s 50m Freestyle S13 final in a World Record time of 26.56 seconds, going past the previous record of 26.56 seconds. Dedekind, who is visually impaired in the rigth eye and has limited vision in her left and defeated Hannah Russell of England and compatriot Kirralee Hayes. India defeated Wales 3-1 as Vandana Katariya scored a brace with Gurjit scoring the other goal. Katariya proved yet again why she is one of India’s key players as she shone despite some brilliant defence by the Welsh squad. While India held the most attack circle penetration of 76 per cent, its ball possession was only of 56 per cent in comparison to Wales’ 24 per cent. This was India’s second win on the trot at the 2022 Games after it beat Ghana 5-0 in the opener. 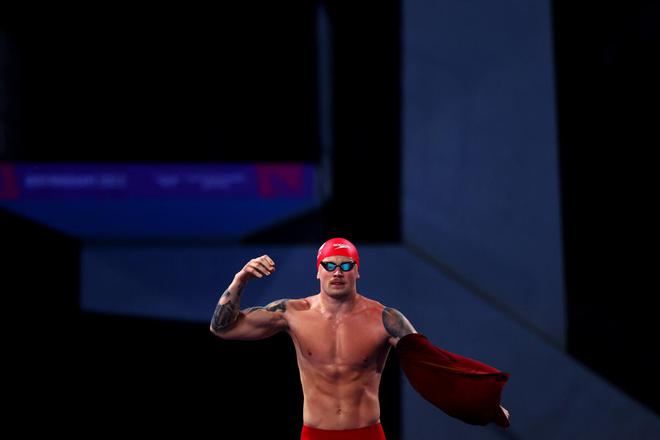 Adam Peaty of England ahead of the Men’s 100m Breaststroke semifinal on day two of the Birmingham 2022 Commonwealth Games on Saturday.
| Photo Credit: GETTY IMAGES

Adam Peaty, the 100m breaststroke Olympic champion from England, had fractured a bone in his foot in May and did not compete in the World Championships. In his first competition post-injury, he swam the fastest in the 100m breaststroke and was the only swimmer to finish under a minute in the heats, clocking 59.92 seconds. Peaty eventually qualified for the final with the fastest timing of 59.02 seconds in the semifinal. Elsie Eyres (left), a six-year-old gymnast, performes a split in front of Mirabai Chanu, who won the the gold in the Women’s 49kg Weightlifting event. After her historic feat, the ever-cheerful and upbeat Mirabai said, “I will go back to India and celebrate. I will train for the World Championships and also eat pizza.”

Bindyarani makes it four for the day 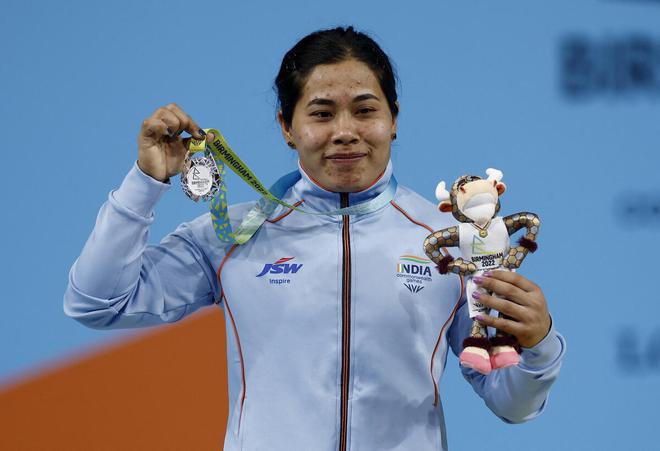 In the closing minutes of the second day’s action, Bindyarani Devi added a fourth medal to India’s tally with a silver in the Women’s 55kg weightlifting event. The lifter managed a total weight of 202kg. Her best attempt in the Snatch was 86kg while she managed 116kg in the Clean and Jerk. Bindyarani was sitting in the third place before her last Clean and Jerk attempt, but recorded a Personal Best lift of 116 kg to steal the second spot and cap off a dominating day for Indian lifters.