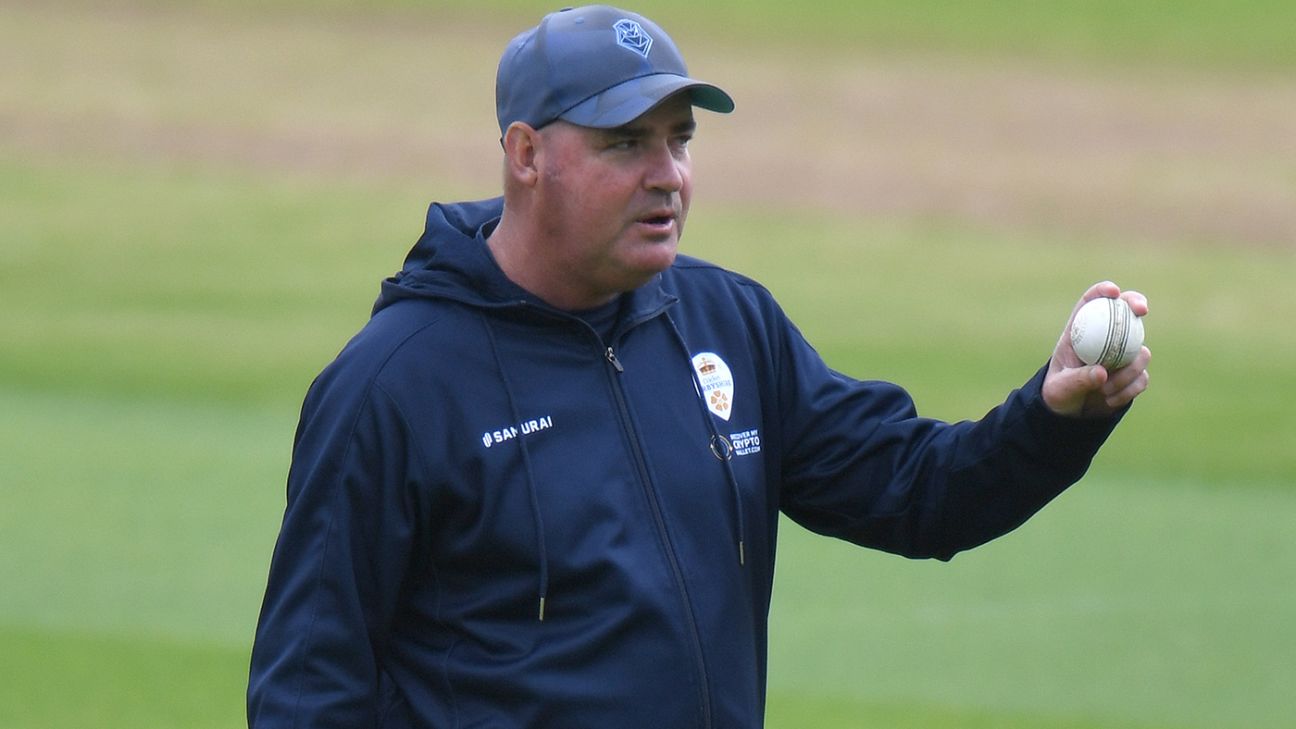 Derbyshire have sacrificed one of their T20 Blast home games to be part of the tournament’s ‘Blast Off’ curtain-raiser at Edgbaston on May 20. The tournament will launch in 2023 with Birmingham Bears against Yorkshire and Derbyshire against Lancashire, in a double-header that will be televised live on Sky Sports. They will be the only fixtures scheduled on the Blast’s opening day.

As a result, Derbyshire will only play six T20s within the county borders next year – five at Derby, and one at Chesterfield – but Mickey Arthur, their head of cricket, said that the club are “really happy to be part” of a showpiece occasion.

“The fact is we still get five home games at Derby, and we still get the Chesterfield game which is always a great occasion,” Arthur told Derbyshire’s YouTube channel. “This just adds – certainly for us, as players and support staff – a lot of excitement to the start of our Vitality Blast season.”

He suggested that if Derbyshire reach Finals Day – which also takes place at Edgbaston, on July 15 – for only the second time in their history, the experience of having played in front of a big crowd at the venue earlier in the season would prove beneficial.

“It’s going to be a fantastic occasion,” Arthur said. “We’re really happy to be part of it. We want our players to play on the big stage and play under pressure more often. I’m all for occasions like this: there will be a big crowd in and I know this will make our players better, and hopefully give us a little taste of what potentially Finals Day could be like down the line.”

Derbyshire members and ‘Blast pass’ holders will be able to buy free tickets, while other supporters who have attended matches in recent seasons will have access to a priority ticketing window.

Ryan Duckett, Derbyshire’s chief executive, said: “The Vitality Blast continues to be a fantastic competition and this new concept will create a focal point for the start of the T20 season, getting Blast front of mind for spectators at the start of the summer. We are hoping Blast Off will become another high-profile event in the cricketing calendar and help continue to grow attendances in the early rounds of matches right across the country.

“Blast Off will have a Finals Day feel, as well as the activations which a televised event brings, and it is great for Derbyshire to be involved in the inaugural event. Mickey [Arthur] and the squad are looking forward to playing on the big stage and as a club, we are delighted to be part of such an event and what promises to be a fantastic occasion for our players, members, supporters and the wider game.

“While this is one less fixture in Derby, these are the big occasions we want our players to be tested with and our supporters to be able to watch and enjoy. Entry for the double-header is included in membership and with our Blast pass, and we are in the process of confirming discounted transport options.”

The ECB said in a press release: “Vitality Blast Off is set to give fans their first opportunity to watch some of England’s newly-crowned men’s T20 world champions in action.”

However, the double-header is expected to clash with the end of the IPL’s group stage, which would rule out the involvement of Moeen Ali, Jos Buttler, Liam Livingstone and Jonny Bairstow.

Men’s county and women’s regional fixtures will be released in full on November 30, with the Hundred’s 2023 schedule due to follow at a later date.

Matt Roller is an assistant editor at ESPNcricinfo. @mroller98