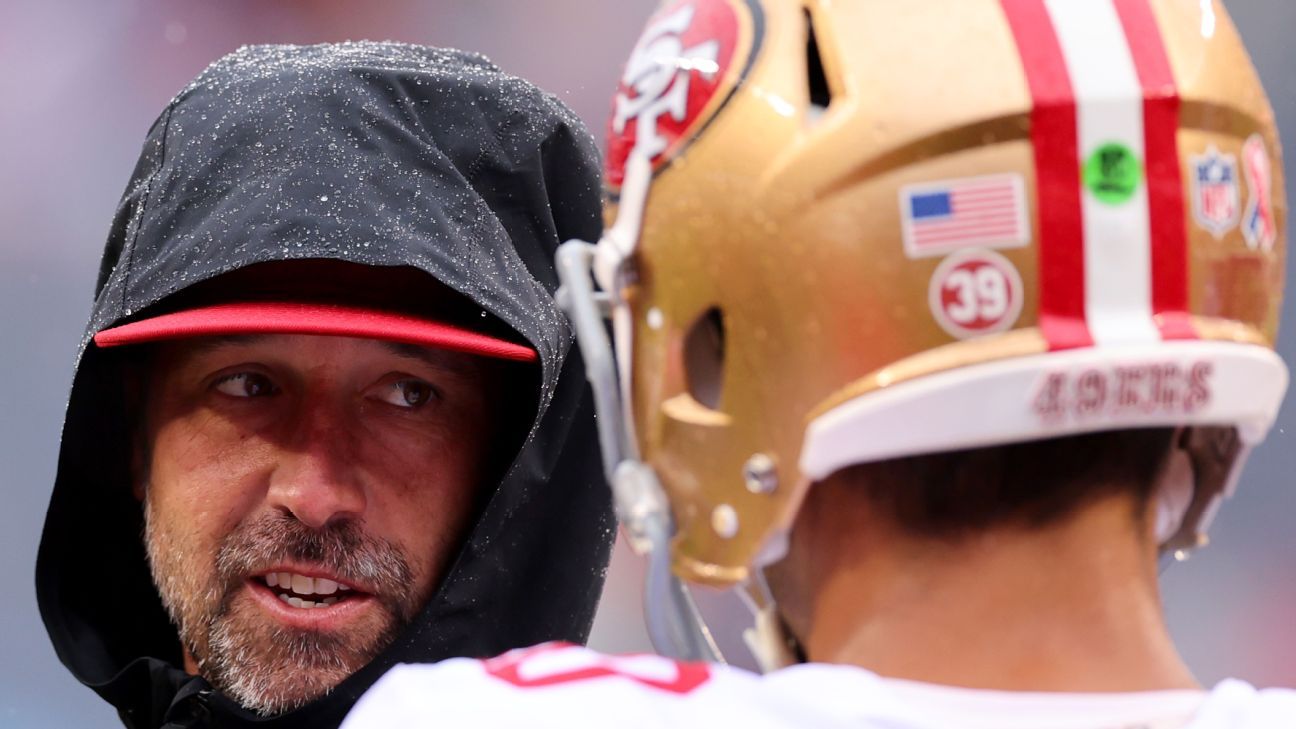 SANTA CLARA, Calif. — After the San Francisco 49ers again lost quarterback Jimmy Garoppolo to a season-ending injury Sunday, they spent the ensuing 24 hours sifting through both the short- and long-term implications of his loss.

On Monday afternoon, that meant doing everything from determining whether to pursue released signal-caller Baker Mayfield on the waiver wire to assessing how Garoppolo’s loss affects their Super Bowl aspirations.

Mayfield’s release Monday from the Carolina Panthers was the topic du jour for many 49ers observers as its timing came on the heels of Garoppolo’s broken left foot. For the Niners to acquire Mayfield, he would have to either fall to their spot in the waiver wire (currently No. 24) or clear waivers and be free to negotiate a deal with San Francisco.

But when coach Kyle Shanahan was asked about Mayfield on Monday, he indicated the QB probably wouldn’t be in the Niners’ future, at least not right now.

With rookie Brock Purdy taking the reins as the starter, the Niners moved quickly to get a veteran backup, agreeing to terms with veteran Josh Johnson on Sunday night. Johnson has been with the Niners before, most recently in 2020, and that experience and knowledge of San Francisco’s offense made a reunion appealing.

“Just having him here in 2020 for that last month of the year, we got to see a lot of him just as a player, which we liked the player but more importantly we really liked the guy,” Shanahan said. “We feel fortunate to get him back here.”

As for other potential outside quarterback options, Shanahan said the team has not heard from any retired veterans who might be looking to join a contender like the 8-4 Niners.

“Still waiting on Joe (Montana) to call,” Shanahan said jokingly. “I’m definitely ready for Steve (Young). I think he could still run it, so let’s do it.”

As for Garoppolo, he and the Niners are still awaiting word on the extent of his broken left foot before determining a timetable on how long he’ll be out and putting together a rehabilitation plan. Shanahan acknowledged initial fears of a Lisfranc (midfoot) injury might be alleviated but emphasized that there hasn’t been an official diagnosis yet.

“That’s why they’re still trying to work through it,” Shanahan said. “They were talking about that a lot last night but it seems like they are starting to believe that it isn’t. So, that’s good news. But it’s not all for sure done yet. Some specialists have got to finalize it, so we don’t want to give you guys any false information but they’re discussing all those things.”

In the meantime, Garoppolo joined his teammates for meetings on Monday after spending Sunday night at home with his family. Shanahan said he spoke to Garoppolo on Sunday night but it was good to have him around the team so everybody could give him a hug and wish him well. All things considered, Shanahan said Garoppolo was in “good spirits” and was upbeat about making a full recovery from the injury.

Next, the Niners will turn the page to preparing Purdy to play against the Tampa Bay Buccaneers on Sunday. Shanahan and the 49ers were pleased with how Purdy played in the 33-17 win against the Miami Dolphins on Sunday and though their Super Bowl aspirations appeared to take a hit with the Garoppolo injury, Shanahan said his team believes all things remain possible.

“I just think we’ve got a really good team who has worked our butts off to get in this position where we’re at now,” Shanahan said. “We’ve got a lot more football left and I know it’s a real big loss starting with Trey (Lance) and then the huge loss of losing Jimmy last night. That is a big deal, but I do also believe our team is built for this.”