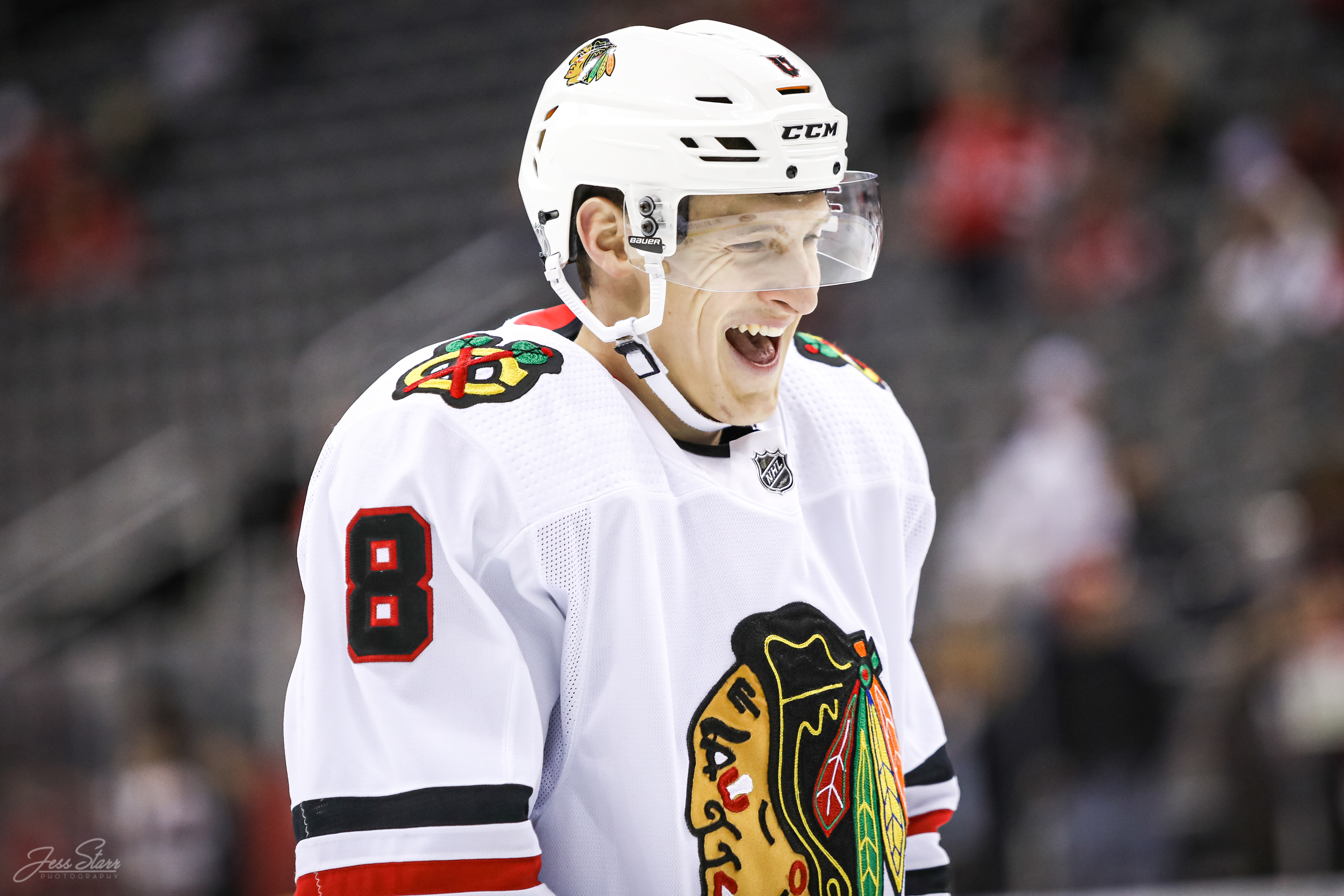 When Detroit Red Wings general manager (GM) Steve Yzerman was asked to assess the moves he made in free agency, he described forward Dominik Kubalik as a “pleasant surprise.” Perhaps the GM anticipated Kubalik would be retained by his previous team, the Chicago Blackhawks. Perhaps Yzerman figured there would be more competition for the 26-year-old winger; after all, signing a player who has 62 goals over the last three seasons to a two-year deal that carries a cap-hit of just $2.5 million has to be seen as a high-value move for Yzerman and the Red Wings. But if you ask Kubalik, he’ll tell you that he anticipated moving on from the Blackhawks a lot sooner.

“I kind of [expected] something during the deadline, which was something surprising for me that I didn’t get traded because…all the rumors were around and I kind of felt [it was going to] happen.”

Instead, he finished out the season with the Blackhawks. After the season was over, instead of retaining his services via a qualifying offer, Chicago elected to let the Czechia-native become an unrestricted free agent, free to sign with any team. One year after the same set of circumstances landed Pius Suter with the Red Wings, Kubalik now becomes the latest Blackhawk to cross over Lake Michigan and head to Detroit.

Kubalik Is a Goal-Scorer

As a 24-year-old rookie during the COVID-shortened 2019-20 season, Kubalik impressed by scoring 30 goals and 46 points through 68 games. That stat line was good enough to make him a finalist for the Calder Trophy, awarded to the NHL’s Rookie of the Year. Cale Makar of the Colorado Avalanche went on to win the award, but Kubalik had announced himself as “found money” for the Blackhawks after Chicago traded a 2019 fifth-round pick to the Los Angeles Kings in exchange for his signing rights (the Kings originally acquired him with the 191st pick of the 2013 draft.) Asked what was the secret to his success, he deferred to his linemates.

“I think the chemistry with Jonathan Toews and Brandon Saad was amazing. I felt right away it started clicking,” Kubalik explained. This sentiment was more or less confirmed when I asked THW Blackhawks reporter Brooke LoFurno about his linemates in Chicago.

“Throughout all the different linemates he has had, the most consistent one has been Toews, and that’s the one he has had the most success/chemistry with,” LoFurno explained. “It worked because their games complement each other because Toews can play a two-way role, while Kubalik’s main strength is offense.”

To that point, Kubalik was also quick to point out that he had a down year offensively during the 2020-21 season due, in part, to Toews missing the entire season with an illness.

“I was up and down in the lineup, and I think the second half of the season was much better,” he said of the 2020-21 campaign.

During the 2021-22 season, Kubalik played 78 games – by far the most of his three-year career in the NHL. Despite that, he finished with the lowest goal (15) and point (32) totals of his career. His struggles mirrored those of the team he played for as he was outplayed on the ice more often than not. Even with Toews back in the lineup, his season – along with the Blackhawks – quickly became one to forget.

Declining point and goal totals can be a harbinger of a player’s waning status as an NHL player; countless players have come through the league and had one really strong season before completely fizzling out and becoming nothing more than the answer to an obscure question on trivia night. Those concerns will hover over Kubalik until he does something to answer them, but LoFurno is not concerned.

“I wouldn’t worry too much. It was just a bad year,” she said. “I think a lack of confidence caused the drop in his production. You could see it throughout the year that he just didn’t look like himself. He is a shoot-first player, and that game style has always worked for him because he is a natural goal scorer.” She also remarked on how the scoring forward started to look for passing opportunities rather than opportunities to score, and that’s a sure sign of a player that doesn’t have confidence in themselves. Despite Toews’ return to the lineup, Kubalik found himself moving up and down the lineup as Derek King, the Blackhawks interim-head coach last season, tried to find a spark for the Czech forward.

Related: Blackhawks’ Dominik Kubalik’s Slump Is Cause for Concern

But last season is behind Kubalik now, and he’s looking forward to trying to rediscover his scoring touch.

“Right now, it’s a fresh start…and I’m very excited about the opportunity and hopefully I’m gonna [start like I did] in Chicago.”

When Kubalik was asked if he’s spoken to any of the Red Wings he already knows, he mentioned that he spoke with defenseman Filip Hronek, the longest-tenured defenseman on Detroit’s roster, for 40 minutes in the aftermath of the signing. During that conversation, it’s easy to imagine that Hronek brought up their countrymen Jakub Vrana and Filip Zadina, the latter of which Kubalik should have an opportunity to establish some early chemistry with.

Several media outlets, including THW, have projected the Red Wings’ third line to consist of Kubalik and Zadina on the wings while Kubalik’s former Blackhawk teammate Suter lines up down the middle. Over the last two seasons, Suter has established himself as a non-flashy utility player that makes up for his lack of offensive explosiveness by making a solid impact in all areas of the game. Zadina, on the other hand, has flashed the kind of game-breaking talent that made him the sixth pick of the 2018 draft, but has recently been mired in his own slump fueled by inconsistency and a lack of confidence.

It’s easy to see how this trio would work together. Suter would be the two-way center, similar to what Kubalik had while playing with Toews, that plays a complimentary role to his wingers. Zadina would take on a playmaking role because, as LoFurno notes, Kubalik is better at finishing opportunities than creating them.

“If he is not scoring, he doesn’t provide much else because he isn’t exactly a playmaker either. But that’s not to say he can’t be with the right linemates.”

This also highlights what Kubalik will bring to Detroit’s power play. Outside of Vrana, the Red Wings didn’t really have any bona fide triggermen that put an emphasis on shooting the puck and shooting it well. With Vrana likely on the team’s top power play unit, Kubalik would provide that same shooter’s mentality on the team’s second power play unit. With Zadina and Hronek also likely to be on that second unit, the Red Wings have a real chance at icing two power play units that can do some damage – something that they haven’t had since before Yzerman took over as GM in the Spring of 2019.

““It’s going to be different for me…to have a couple more Czech guys around me, which is always helpful. I’m…sure they’re [going to] help me for sure,” Kubalik said.

Kubalik A Low-Risk, High-Reward Acquisition for the Red Wings

Through 202 regular season games in the NHL, Kubalik has a goals per-game rate of .31. Over a full 82-game season, that equates to a little under 25.5 goals a season. Admittedly, the last three seasons may be the most unreliable sample to pull from given everything that has gone on within the NHL and around the world, but the fact remains that this forward has proven that he has a knack for putting the puck in the net. If he can supply 20-25 goals in a third line role this season, that’s well worth the $2.5 million he’s making this season and next.

If it doesn’t work out and the last two seasons prove to be closer to the reality of what this player is, then the two-year term isn’t going to handcuff the Red Wings. In fact, the chances of this deal coming back to haunt the Red Wings seem slim-to-none simply because of the two-year commitment. This is a classic case of low-risk, high-reward as Kubalik could very well return to form next season while playing on one of the better value contracts on the team.

“My thoughts are that I’m there to help. I’m hoping that I can do much better than I did last year,” Kubalik said. “I know it’s in me and I’m going to do everything I can to prove it.”

I am a Western Michigan University alum whose passion for hockey knows no limits. Dr. Pepper enthusiast. Catch me and my fellow Red Wings writers’ YouTube show “The Hockey Writers Grind Line” which drops every Saturday.