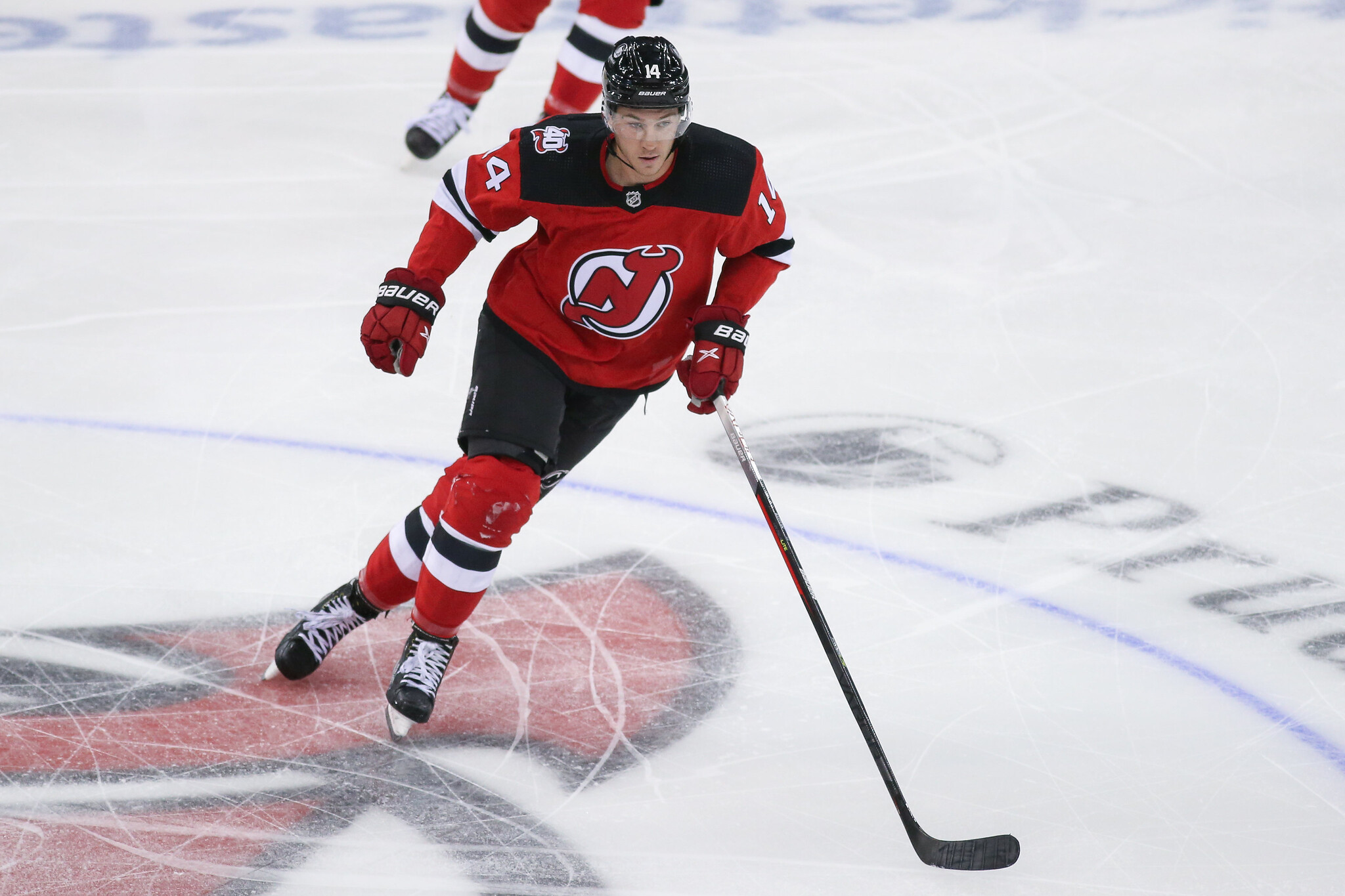 The New Jersey Devils have played three games without fourth-line grinder Nathan Bastian. In that span, the team is 2-0-1, but they have struggled and at times, were lacking the speed that they have become known for. The club’s slow starts have been amplified the past few games, with the team allowing two goals in the first three minutes of the opening frame against the New York Rangers on Nov. 28, a Nashville Predators goal 11 seconds into the first period on Dec. 1, and only four shots on goal in the first 20 minutes against the Philadelphia Flyers on Dec. 3.

As I watched the Devils’ game versus the Flyers, I realized that Bastian could prove to be a bigger loss to the team than Mackenzie Blackwood and Ondrej Palat. To be clear, I’m not comparing the three players but examining how easily they can be replaced while they recover from their respective injuries. Before I continue, let’s revisit the injuries of the two aforementioned players.

New Jersey’s first major injury of the season occurred on Oct. 24. The club lost Palat to a groin injury, and while he has reportedly been skating, he is not expected back for a couple of months. Additionally, Blackwood has been sidelined since Nov. 3 with an MCL sprain and is working his way back. He is expected to return ahead of Palat.

The good news is those two injuries have not affected the club’s performance. In fact, the Devils set an NHL record for the most wins in the month of November with 13 (13-1-0). Forward Fabian Zetterlund seamlessly jumped into a top-six role and has collected 12 points since Oct. 25. Additionally, Vitek Vanecek and Akira Schmid have proved to be more than capable as a tandem, and have performed extremely well in Blackwood’s absence. Since his call-up, Schmid has an impressive record of 5-0-0 with a goals-against average of 1.42 and a save percentage of .949.

Related: Devils Finally Have a Number One Goaltender in Vitek Vanecek

Palat was brought in to play a crucial role in the team’s top six, playing alongside either Jack Hughes or Nico Hischier. Through six games, he had three goals and was a perfect addition to the lineup. His injury was a tough blow, but his absence has not hurt the club. The Devils have lost only one game in regulation since Oct. 24 and have been getting scoring contributions up and down their lineup.

Bastian’s Unique Role on the Team

Through the first quarter of the season, Bastian has found himself in a unique situation. Yes, he is a fourth-line grinder, but he is also utilized on both the first power-play unit and penalty kill.

“I think I almost have a little bit of a unique role,” he said. “I think I’m on a fourth line that’s valued on this team. I don’t think many fourth liners get a crack at the first power play unit. They use me there and the penalty kill is something I’ve been working at and kind of all different areas of the ice. I think it’s nice that Lindy trusts me. It’s all kind of small areas that I have been trying to build on.”

Fans have seen Dawson Mercer take over Bastian’s role as the net-front presence on the first power-play unit in the past couple of games and playing minutes on the penalty kill. Before his injury, the Ontario native averaged 1:52 on the man advantage and 1:51 shorthanded.

How Will the Loss of Bastian Affect the Team?

The Devils have not officially announced Bastian’s injury or a timeline for the 6-foot-4 forward, but it appears he has sustained some kind of shoulder injury. If that’s the case the team could be without the Ontario native for quite some time.

New Jersey has displayed an impressive amount of depth at every position, so far this season. Up until their game against the Flyers, head coach Lindy Ruff was successfully rolling four lines, which included the BMW Line consisting of Bastian, Michael McLeod, and Miles Wood. When these three players are put on a line together, magic happens. They have fully embraced what Devils hockey means and can be counted on to change the momentum of the game. The trio have also been known as the impact line thanks to their ability to not only contribute to the scoresheet, but play a physical game. The three aforementioned players have combined for 125 hits and 33 points before Bastian’s injury.

The Ontario native is arguably one of the most underrated wingers on the team. He takes on the tough responsibility of being the net-front presence and plays well along the walls. Similar to how the Devils were unable to replicate Wood’s game last season, it will be difficult to find a replacement for Bastian.

Who is the Best Replacement for Bastian?

Over their past three games, Ruff has moved Zetterlund down to play alongside McLeod and Wood. The new trio scored the team’s fourth goal against the Rangers and the Devils’ first goal against the Flyers. Offensively the 23-year-old Swede has been a compliment to Wood and McLeod, but the overall impact of the line hasn’t quite been the same. In the last three games, Zetterlund has four hits (one versus the Rangers, zero versus the Predators, and three versus the Flyers). He can play a physical game but does not do so as consistently as Bastian, who leads the team with 50 hits in 21 games.

I saw a few fans online talk about Nolan Foote being an option to replace Bastian, so I wanted to address it. With regards to size, he is the closest to Bastian at 6-foot-3, 196 pounds. The Denver, CO native has 10 points (six goals, four assists) in 19 games for the Utica Comets of the American Hockey League. He has spent time focusing on his game, specifically learning how to use his size to his advantage.

“I think for me just using my size down low and holding pucks longer and taking advantage of trying to create plays with my size and space for myself and linemates,” said Foote on Nov. 9. “I think I’m doing better. It is getting there.” (from ‘Foote building game with Utica Comets,’ Daily Sentinel, Nov. 9, 2022).

Foote would be a surprise considering the club has already recalled forward Andreas Johnsson, who continues to practice with the club. At 22 years old, Foote is still finding his game and looking for ways to build upon his strengths.

After Monday’s practice, Ruff was asked about Bastian, and the head coach said he will be out indefinitely and provided no new updates. Fans have seen a difference on the ice without the fourth liner, and it will interesting to see how the coaching staff decides to move forward without one of their most impactful players.