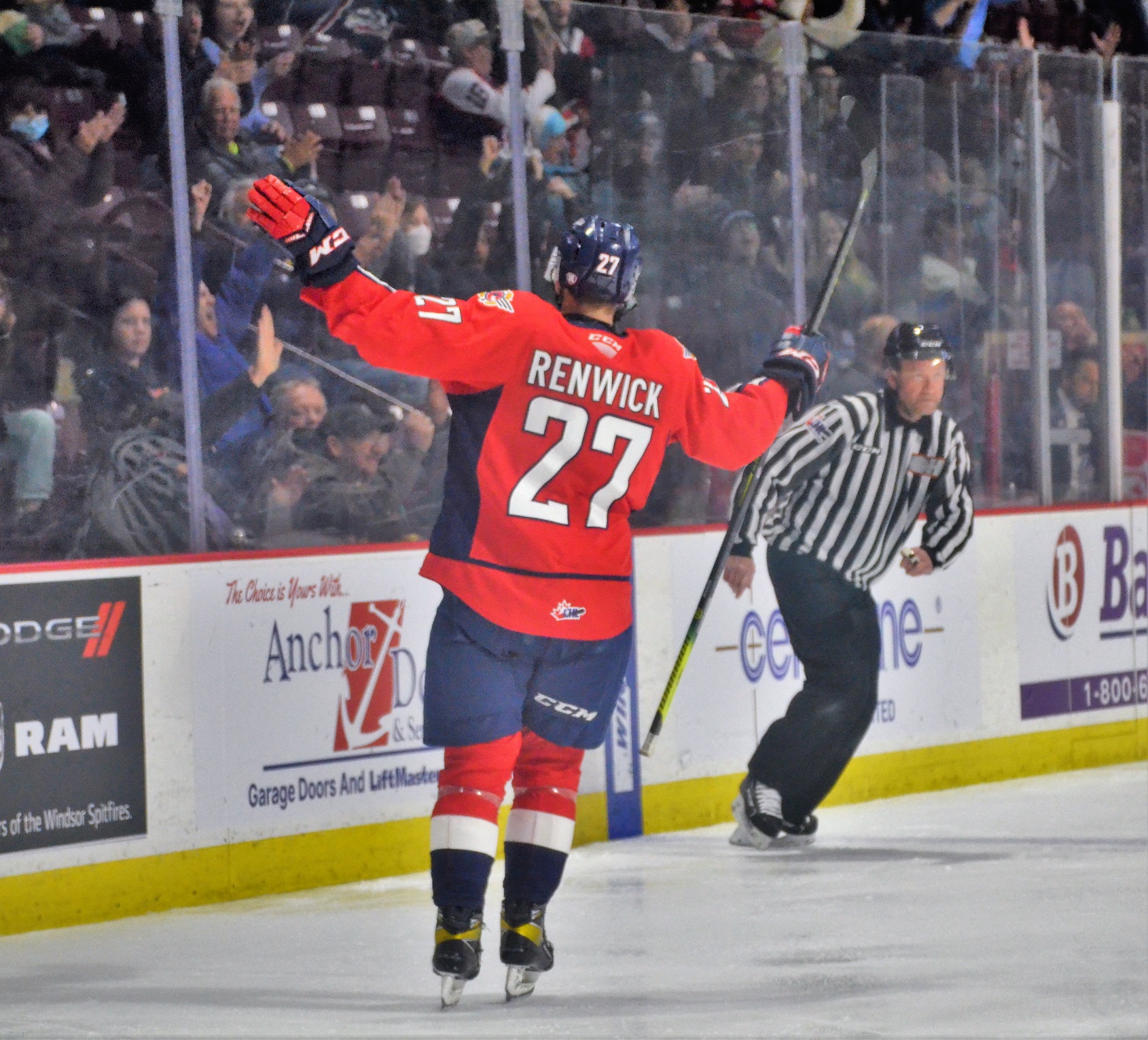 The Windsor Spitfires have some business to take care of this summer. One of their biggest tasks is figuring out their 20-year-old (overage) situation. The choices won’t be easy, though, with numerous talents eligible to take only a few spots.

When the club found success this past season, general manager Bill Bowler worked the phone lines to bring in some veteran talent. The new arrivals found plenty of success, as the team made it to Game 7 of the Ontario Hockey League (OHL) Championship, but it also created some future questions. The club currently has seven 19-or-20-year olds (born in 2002) eligible to return for a final season – defenceman Michael Renwick, forwards Josh Currie, Matthew Maggio, and captain Will Cuylle, along with goaltenders Mathias Onuska and Xavier Medina. However, only three can dress on any given night so most teams only carry that amount. Who might get a roster spot? Who could continue their career elsewhere? Let’s take a look.

Expect Them in a Spitfires’ Uniform

The Spitfires are expected to be a younger roster in 2022-23, built around the likes of sophomores Ethan Miedema (2021 draft), Ryan Abraham (2020 draft), and star Wyatt Johnston (Dallas Stars). However, they’re going to need veterans to lead the way and they have seven who could return for a final season. As such, these two are the most likely to get a spot come October.

When 2021-22 got underway, the Spitfires finally got to see the fruits of a June 2020 trade with the Hamilton Bulldogs. That’s when they shipped multiple picks to Steeltown for the 18-year-old defenceman Renwick. While COVID-19 shut down the 2020-21 season, the veteran defenceman more than made up for it in his first season at the WFCU Centre.

The 6-foot, 187-pound Mississauga-native had a homecoming of sorts, as his grandfather is former Spitfires’ bench boss (and Windsor-native) Dave Prpich. From the start of camp, everything just fit. Renwick took control of the blue line, playing sound defence, throwing the body, and chipping in with a career-high 18 goals and 29 points in 67 games. He became Mr. Reliable and even scored the game-winner against the Bulldogs in Game 1 of the OHL Championship Series. However, given he’s now 20 years old, his future in the OHL is in question.

Renwick is undrafted by the NHL and, while that can be frustrating for him, it’s a golden chance for the Spitfires. With multiple veterans graduating or traded since the season ended, he would return as a vital part of the blue line. Expect him back for one final season, maybe even with a letter on his jersey.

Back in early January, if you asked if their newest goaltender, Onuska, would play an overage season for the Spitfires, most would have given you an odd look. Perhaps rightfully so, too. After all, they acquired the 19-year-old from the London Knights at the trade deadline for a pair of picks. Stuck behind star goaltender Brett Brochu, he had just three OHL starts prior to the trade. However, Onuska was given every opportunity and ran with it, soon taking over for the 19-year-old veteran Medina, who had other issues to deal with (see below).

Onuska became the team’s rock in the playoffs, as he was cool, calm, and collected in goal and a professional off of the ice. If the team needed something, he stepped up and loved every minute of it. Given his success, the fan favourite has earned an overage spot. He would be the perfect mentor to a young goaltender next season whether that’s 2020 second-rounder Kyle Downey or someone else. It would be a shock if he’s not in a Spitfire uniform come September.

Roll of the Dice

Should Renwick or Onuska be unavailable to take a spot, there are four others who could take it. They bring talent, some leadership, and a drive to win an OHL title.

If you asked in June whether the veteran Maggio would return, the answer would have been “100 percent.” The Tecumseh-native is at home on the Spitfires, a leader, and coming off a breakout 38-goal season. However, the 2022 NHL Draft put a major dent in the plans.

The Spitfires originally acquired Maggio from the Ottawa 67’s in 2019 for a pair of second-round picks. Initially, his production struggled and critics wondered if he was worth the price. Then, the COVID-19 stoppage happened and it all changed.

Maggio went to Sweden to play for SK Lejon (HockeyEttan) and had 11 points in 19 games. Something clicked and he came back as a completely different player. Upon his return, he joined Johnston and Cuylle on the top line and the rest became history.

Maggio opened 2021-22 on a torrid pace and didn’t let up, finishing with 38 goals and 47 assists in 66 games, shattering all previous career highs. Not only was he dominant on the ice but he became a leader in the room and a key piece to their playoff run. All of this was rewarded when the New York Islanders drafted him in the fifth round earlier this month; a rarity for a 20-year-old. However, now this raises questions.

Before being drafted, it was almost a guarantee that Maggio would return for a final season. Now, there’s a chance he could head to the Islanders’ American Hockey League (AHL) affiliate in Bridgeport. While it would be a well-earned promotion, it would also be a big loss for the Spitfires. Only time will tell on this one.

Part of the Spitfires’ build for their playoff run was a big deadline deal with the North Bay Battalion that saw the veteran forward Currie (top right in Tweet below) coming to the WFCU Centre. While he didn’t have the offensive resume that forward Kyle McDonald did (who went to the Battalion), he brought the little things that proved invaluable along the way.

Currie immediately fit in and became a vital part of the roster, as he joined forces with fellow new Spitfires Jacob Maillet and Alex Christopoulos to form the “dead line” (mid-season acquisitions). He put up 18 points in 41 games for the club, used his 6-foot-2 frame to his advantage, and became an excellent two-way minutes-eater. His “do anything” attitude was just what the team needed in the playoffs and he was a favourite both with the fans and in the room.

The issue becomes whether or not he comes back for a final season, gets traded, or goes the college route. If Maggio had gone undrafted, he likely returns, and Currie is likely gone. However, now that’s all up in the air. While Currie doesn’t provide the same offence, he would be a fantastic mentor to the younger players and the club would benefit for seasons to come.

After three years of uncertainty, 2021-22 was supposed to finally be Medina’s time to shine. However, it went nearly the complete opposite way.

Medina was the club’s third-round pick in 2018 and, after battling Finnish import Kari Piiroinen for playing time in 2019-20, the crease was all his. It was a perfect setup; he would be the starter and the 17-year-old Downey would be his protege. That hit a speedbump early, though, when the veteran not only struggled to start but then dealt with injuries and COVID-19. It forced the club to start Downey (who wasn’t ready) and acquire Onuska at the deadline. From there, it only got worse.

While Onuska was the rock the Spitfires needed, Medina struggled to get his crease back and it came to a head in late February. The team refused to disclose exactly what happened, though we were led to believe it wasn’t just injuries or COVID-19.

From there, Medina saw limited action through the playoffs, though he played well when called upon and seemed to earn his team’s trust. However, was it enough to earn an overage spot for 2022-23?

Bowler has some decisions to make. Ideally, Onuska and Downey become a solid 1A/1B. If the veteran doesn’t return, though, all bets are off. Medina’s return seems 50/50 at best but stranger things have happened. This is worth watching over the summer.

There’s one more 20-year-old who we haven’t listed yet – Cuylle. While it’s theoretically possible for him to return, there’s no reason to believe it will happen.

Cuylle was the New York Rangers second-round pick in 2020. While he struggled to increase production in his sophomore 2019-20 season, the pros saw the potential in him and took a chance.

The veteran played 18 games for the Hartford Wolf Pack (AHL) in 2020-21, signed with the Rangers in April 2021, and came to the Spitfires in October rejuvenated and ready to dominate. While there was some pessimism about what he could do, he never stopped working. The club named him captain and, in 59 games, he put up 43 goals and 80 points, blowing out his previous career highs and becoming the leader the team needed. At 6-foot-4, 209-pounds, he used his body to gain momentum, defend teammates, and unleash a wicked shot. He was consistently on a mission and everyone took notice.

Cuylle came into his own as a dominant power forward in 2021-22, proving that he’s ready to take the next step in his development. Barring some weird situation, he will turn pro next season and Spitfires’ fans will get to watch his career head to new heights. It was fun while it lasted, though.

Coming into 2022-23, Bowler and the Spitfires have a lot of question marks. Going for a championship run was incredibly fun for the team and the City of Windsor, but now the next steps have to be taken and that means roster changes. Get ready for some new looks when training camp opens in September.