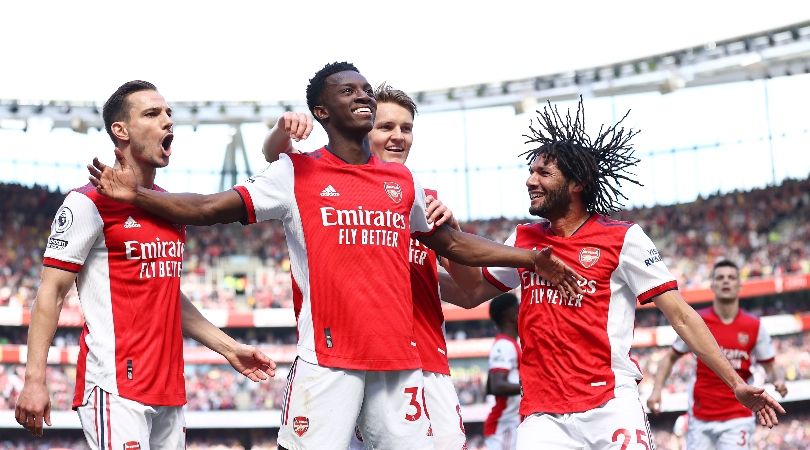 Arsenal striker Eddie Nketiah has committed his future to the club by signing a long-term deal, the Gunners announced on Saturday.

The club also revealed that the England Under-21 international will inherit the No.14 shirt formerly worn by the legendary Thierry Henry.

The length of Nketiah’s new deal was not revealed in Arsenal’s statement, only that it is a “long-term contract”.

“I’m delighted Eddie is staying with us. He represents what we are all about and all the values of the club,” said Gunners boss Mikel Arteta.

“We are very happy that he has extended his contract and now we have to get to work and continue to develop the great talent and person that we have in him.”

Nketiah scored 10 goals in 28 appearances across all competitions for Arteta’s side last season – five in the Premier League and five in the League Cup.

The 23-year-old ended the season strongly by netting all five of his league goals in his final seven appearances, while he featured in every top-flight match for the Gunners from mid-January onwards.

His previous contract was set to expire at the end of the month, but the youngster’s future is now in no doubt after committing to the club he first joined as a 14-year-old.

“The foundations of this squad are built on young talent and in particular those who have come through our Academy system,” said Arsenal Technical Director Edu.

“Eddie was released by another club as a young man but has always shown he has the attitude as well as the ability to become a top player. The fact he’s signed a new contract is an important part of our squad planning for next season and we’re all delighted.”

Arsenal are busy in the transfer market already – and have reportedly already tied up their first deal of the window according to reports.

The search for a striker is ongoing. Gabriel Jesus is still a huge rumour, with the Gunners set to offer him a huge pay rise – though there may yet be stumbling blocks. Gianluca Scamacca remains the Plan B for Arsenal, though both Napoli striker Victor Osimhen and Juventus star Alvaro Morata have been touted.