Despite being one of the standout performers of 2022, the British distance runner faces a barrage of online criticism every time she puts herself in the public eye

Eilish McColgan has become almost numb to the comments. She might be an increasingly high-profile athlete who has been enjoying the most purple of patches on the road and track recently, but online abuse has become a part of her everyday life.

So accustomed has she become to the constant remarks about how she looks or what she needs to fix about her running form that the majority tend to bounce off the protective shield she has had to construct around herself.

Every so often, though, something breaches the defences and makes her realise that it’s not okay. The most recent came in the aftermath of her brilliant performance at the Vitality 10,000 in London, where she won the women’s race and came within touching distance of a British record she would break just over a couple of weeks later.

The Scot took to her social media channels to provide a snapshot of what she has to deal with. The extent, and nature of it, is shocking and it didn’t take long for her fellow athletes to get in touch to express their alarm.

“That really pissed me off because I thought: ‘They’ve just posted two athletes winning the races, so why is it because I’m a female that I get picked on?’

“Mo Farah weighs less than me as a grown man but nobody says anything about that because it’s a man and often men are just celebrated for their achievements.

“It’s always to do with appearance rather than going ‘Congratulations. That was a great run’.

“I’m not the only woman that has to deal with that. I think that that’s just pretty much females in sport. It’s always deemed to be about what we look like, rather than what we’re actually doing.”

McColgan’s post did not come from a place of worry about her own wellbeing. Rather, her chief concern was the number of young followers who might not just be reading these comments – but believing them, too. That they would end up thinking conformity to a certain body type, weight or look, regardless of the consequences, was the key to success.

“For me, it’s just part of everyday life and it’s become normal,” McColgan adds about the online abuse. “It’s not until every so often I call it out that I realise, actually, that shouldn’t be normal. There’s no reason for these people to be making these comments and saying these things.

“I call it out because I want young athletes who follow me to be sure that they know I am a healthy athlete – that they don’t get it twisted, and start reading these comments and think ‘maybe she does have to follow a diet or she does have to starve herself in order to run fast’, when actually it’s just the complete opposite.

“I think in order to have longevity, you have to be fuelling yourself and you have to be looking after your body. I’m very proud, at the age of 31, that I feel I’m getting stronger, faster and better and there’s no doubt that’s because of the way I look after myself.

“The sad and really brutal reality is that the athletes who do not look after themselves unfortunately don’t make it to this level or, if they do, they don’t last very long.

“One guy tried to tell me I was sacrificing my health in order to compete at the level I compete at and it’s just nonsense. I know my body’s healthy and it’s in good energy balance.

“The sport is far less important to me than my health and there is just no way I would ever jeopardise my own health in order to run fast but that’s the sort of mentality that some people have on the outside looking in.”

The subject of body image is a particularly emotive one for McColgan to address, given that it’s something she has had her struggles with since her schooldays. That does mean, however, she understands better than most just how much power the wrong kind of comment can exert.

“As a youngster, I was not very confident,” admits the European 5000m silver medallist. “I felt like I looked like a little boy – and I remember one of the boys told me that. That stuck with me for several years. I didn’t feel attractive or confident and I just never thought I’d get a boyfriend – all these crazy things that, when you’re 12, 13, 14, that’s what you’re told and you feel you don’t look like the people on TV.” 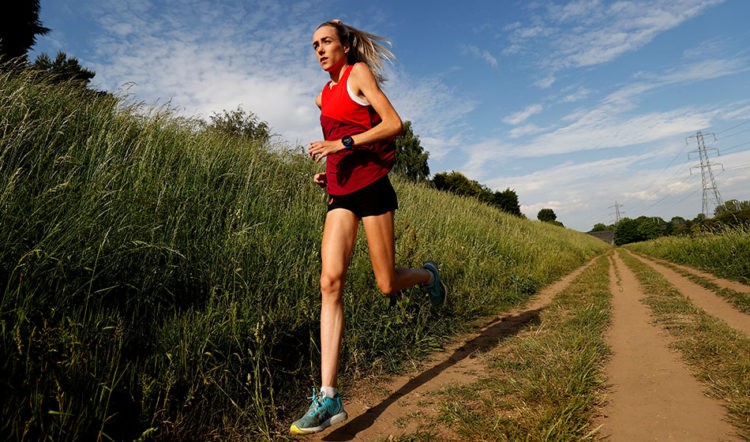 Her confidence has been able to grow and develop over time, helped by the knowledge that her chosen sport is one of the few which can truly accommodate all shapes and sizes.

“I know for a fact there are some youngsters that might look at me and go ‘actually I look like her’ and I think that’s the best thing about athletics,” she adds. “There will be some people that look at the TV and see Sophie McKinna throwing the shot put and think ‘I look like her, I want to be the next Sophie’ or they look like a high jumper.

“Just because I’m lean doesn’t mean I’m unhealthy. Yes, my body shape might be unhealthy for another individual to try and aspire to but to me there’s so many in between so you don’t have to fit. Just be confident in you.

“I wear a crop top and pants and race because that’s what I prefer to race in and for performance that’s what I like to wear. It’s not because I will stand on the start line thinking I look fantastic. I stand on the start line wearing the kit that I feel most comfortable in and I already know that, when I post a video or someone else posts a video, I will get those comments, I will get trolled but I don’t care because I’m here to run.

“I’m not here to just look pretty for someone else or to satisfy somebody else’s opinion on what I should look like.

“I think that’s important as well to try and show the youngsters that, yeah, this is me. I’m not going to shy away from it. I’m not going to hide myself away. I can’t change my natural body shape – there’s not a huge amount I can do about it – so you may as well accept it and be confident in it rather than worry yourself about it.”

McColgan’s levels of belief are very much on the rise now, too, when it comes to her performance – and she is building an impressive  body of work. At the Great Manchester Run, on May 22, she broke Paula Radcliffe’s women’s European 10km record by two seconds after clocking 30:19 in coming second to Kenya’s Hellen Obiri.

That run came almost a month after another of Radcliffe’s marks – the women’s 5km British record – fell into McColgan’s grasp thanks to her run of 14:45 at the META Time Trials in Malaga.

The 2017 European indoor 3000m bronze medallist also replaced the former marathon world record-holder at the top the British half-marathon rankings when running 66:26 at the RAK Half Marathon in February.

Yet 2022 has not all been taken in her increasingly speedy stride. After that half marathon success, McColgan headed to America for her first stint of altitude training this year. On day one, however, she caught Covid. Its impact was substantial.

She was bed-ridden for five days. There were cold sweats, nausea and a heart rate which had “gone through the roof”. The running recovery was slow and fears began to grow that the major championships summer would pass her by.

“It felt crazy going from running a British record over the half-marathon to not even being able to run a mile without stopping,” she says. “It was like operating and not being able to get into any final gear. That’s the only way I can describe it. I would be trying and pushing but I couldn’t access it at all. It was a really strange feeling.

“And then, six weeks into it, all my heart rate levels just dropped and went totally back to normal out of nowhere. I had two very good sessions and then we decided to race.” 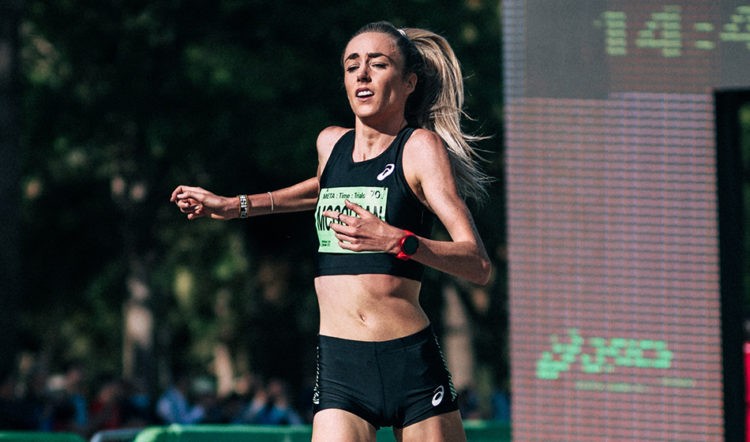 The first race was Malaga and it says much about the training foundations McColgan has put in place with her partner Michael Rimmer and mother Liz in recent years that she was able to bounce back in such incredible style. As she now moves from the road to the track summer, those recent showings have begun to make Eilish now wonder what might be possible this year and beyond.

“I’ve never been someone who has dreamed of winning an Olympic medal, going to bed at night like that’s my dream and that’s what I think about all night,” she says. “Maybe because I didn’t believe that was like a realistic goal.

“I never thought mum’s records were possible but then I started to break them. Paula Radcliffe’s times were so far out of my reach that they were not something I’d ever really thought about. But, of course, as they get closer you do start saying ‘actually, maybe I can do that’ or ‘I definitely can do that’ and your mindset does start to change.

More athletes with McColgan’s openness and honesty would surely enhance the sport. It is a sign of the increasing courage of her convictions, too, that she and Rimmer began a project earlier this year called Giving Back to Track “to inspire children from all backgrounds to enjoy athletics”.

At the time of writing, the charity was also about to announce the first recipients of the Eilish McColgan Scholarship, which was opened to female athletes in Scotland aged 16-22.

The mentoring side of her sport clearly appeals but, should a young Eilish have come across her path, what would her advice have been?

“To believe in yourself. By believing you can do it, you’re setting yourself up to be successful. I think that gives you more opportunity and more scope to become successful, whatever you set your mind to.

“I’ve never been someone who’s shied away from being on a start line, but I probably never fully believed that I should be there. It’s almost like you’re grateful for the opportunity and you’re thankful to be there but you maybe don’t believe you should be there.

“But now I think: ‘Actually, I do belong here. This is what I was meant to do’. I feel like I was built to do this.”

» This article first appeared in the June issue of AW magazine, which you can buy here