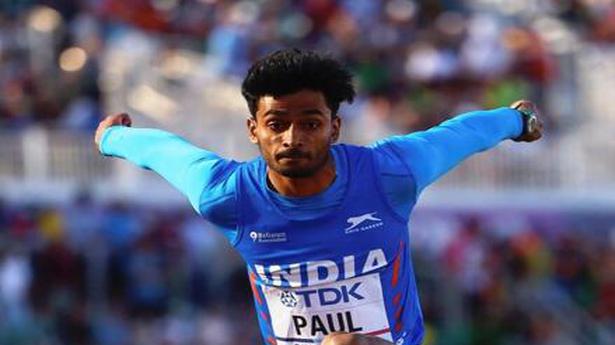 If this year’s performance list in the Commonwealth region is any indication, India should be winning all the men’s triple jump medals in Birmingham. Four Indians occupy the top four rungs and three of them – Commonwealth leader Abdulla Aboobacker (17.19m), No. 2 Praveen Chithravel (17.18) and No. 4 Eldhose Paul (16.99) – will be in action in the Commonwealth Games.

But that is not how things work out at major events and the recent World Athletics Championships offered some valuable lessons on that.

Still it was the 25-year-old Paul, yet to reach 17m, who made the biggest move in Oregon, becoming the first Indian triple jumper to enter the Worlds final and finishing a creditable ninth with 16.79m.

Finishing behind the Navyman from Ernakulam were defending World champion Christian Taylor (16.48, qualification) and multiple Olympic medallist Will Claye (16.54, final).

“Those were fanboy moments for me, got a lot of lessons from them,” said Paul in chat with The Hindu from Birmingham on Friday evening.

Paul believes Indians will be a force to reckon with at the Commonwealth Games.

“Compared to other championships, medal chances are high here. And I think my teammates will be my main challengers. But it’s not about 17m or 18, it’s about consistency and experience overall,” he said.

“International events are very different from Nationals. The Worlds gave me valuable experience. If I can repeat that body condition here, I can win medal.”

Just five Commonwealth triple jumpers, including the three Indians, qualified for the Worlds and Eldhose was the only one to make the final.

A quick look at the Birmingham entry list indicates that England’s Ben Williams (17.27m personal best) could be the top man. But Williams could not even touch 16m at the Worlds, finishing 26th overall.

The signs do look good for India but Asian Games champion Arpinder Singh, the last triple jumper to win a Commonwealth Games medal (bronze, Glasgow 2014), feels it will need a big jump to hit gold in Birmingham.

“At least 17.20m for gold and between 16.50 to 16.70 for bronze,” said Aripinder from the Inspire Institute of Sport, Bellary, before adding, “Our jumpers are in good form and Eldhose has been very consistent, am sure we will win a medal.”