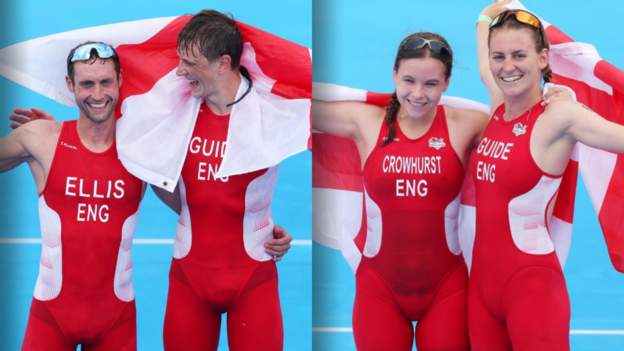 England secured Commonwealth Games gold in both the men’s and women’s Para-triathlon PTVI finals through Katie Crowhurst and David Ellis.

World number one Ellis, 36, guided by Luke Pollard, crossed the line ahead of Australian pair Sam Harding in second and Jonathan Goerlach in third.

Jessica Tuomela and guide Emma Skaug of Canada, who were passed by MacCombe and Sands towards the end of the race, claimed bronze.

“It was an awesome day,” said four-time world champion Ellis. “I think we just hammered the bike and no-one was really feeding back the distance.”

Pollard added that after disappointment at the Paralympic Games in Tokyo last year – where Ellis suffered a broken bike chain which caused him to withdraw – winning in Birmingham was “such a relief”.

Crowhurst turned to open water swimming during lockdown as well as cycling and running when pools closed due to the Covid pandemic.

“I wouldn’t have been able to do it without Jess – it has been great,” she said. “It’s been a really tough competition. It’s great to have the support to help push through the pain (of a stitch).”

MacCombe’s silver has doubled Northern Ireland’s medal count and the 27-year-old was delighted with the result in Sutton Park.

“Catherine saw the Canadians ahead and passing them was unreal. The atmosphere was incredible as well,” she said. “I was fairly confident but you don’t know what’s going to happen out on the course.”

MacCombe’s twin sister Judith – together the two are known as the ‘Tandem Twins’ – finished fourth.