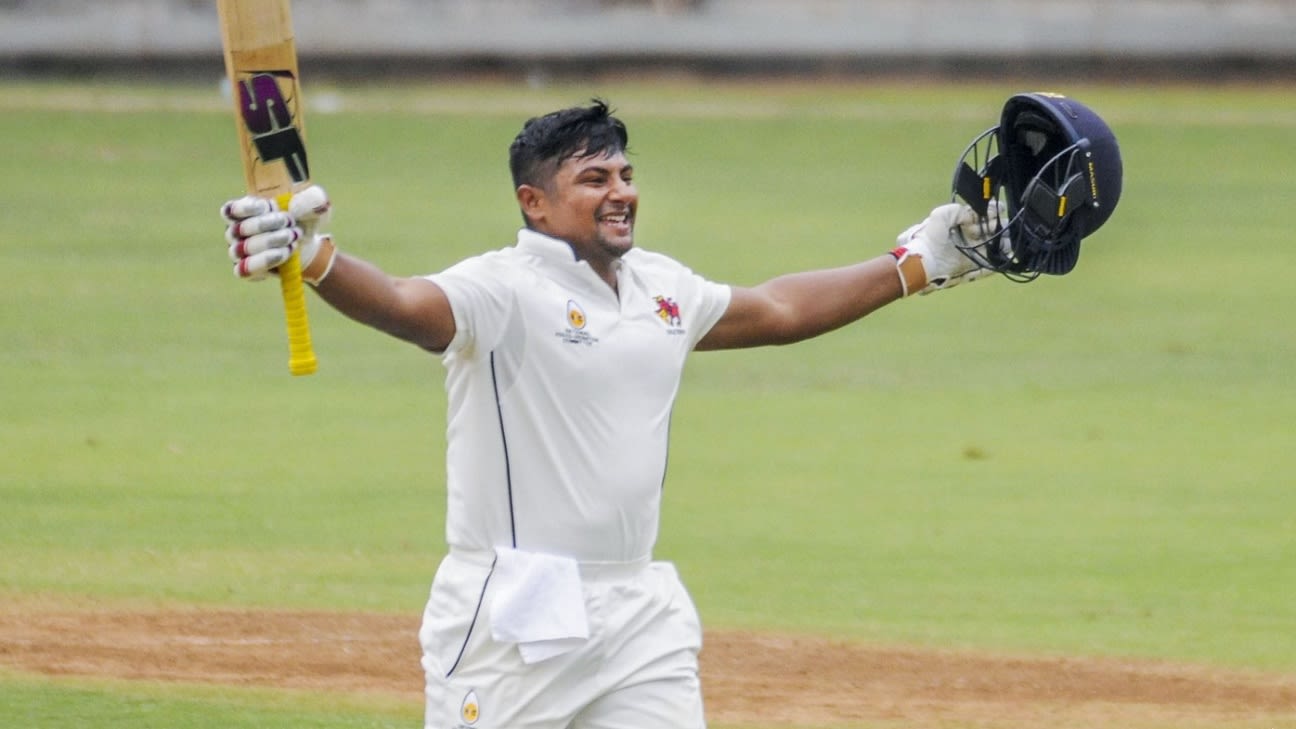 Behind the warm smile, the runs and the masti, there is a deeply emotional side to Sarfaraz Khan. It comes up almost always when he talks about his cricket. No conversation ever passes without the mention of his abbu. On Thursday, after scoring his fourth hundred of the season, and eighth overall in first-class cricket, Sarfaraz was a man in demand.

Sunil Joshi, the national selector, caught up and had a lengthy conversation with Mumbai batter. Then, it was Harvinder Singh’s turn. A few minutes later, as he jogged up the stairs towards the dressing room for a team meeting, he promised to return shortly to chat with journalists waiting besides the boundary.

Sarfaraz was chirpy, candid, and spontaneous, just like his batting. Over the past three weeks, no two interactions with him have felt alike. It can with so many cricketers of the current generation, because they’re always focused on the ‘process’ and not the ‘results.’ Sarfaraz is driven by results. Driven by the desire to score big runs, every time he goes out to bat. This perhaps explains why six of his eight hundreds are all 150-plus scores.

One moment, Sarfaraz had everyone in splits with his jokes and how a “yes, I’ll hang in, you bat your way” from Tushar Deshpande can only mean a wild slog off the next ball. Next, he was teary eyed and ever-so-grateful to his abbu, for his sacrifices in making Sarfaraz and Musheer Khan, his younger brother who is also part of the Mumbai squad, cricketers of some standing.

Musheer, incidentally, is yet to make his first-class debut, but recently led Mumbai to the final of the Under-19 Cooch Behar Trophy, a tournament where he made 670 runs and took 32 wickets to be named Player of the Tournament.

Sarfaraz’s tears stemmed from a sense of gratitude and respect towards his abbu.

“You all know the roller-coaster ride I’ve had, if not for my father, I wouldn’t have been here,” he said, wiping tears off his face. “When we had nothing, I used to travel with my father in trains. When I started playing cricket, I dreamt of scoring a century for Mumbai in the Ranji Trophy. That was fulfilled.

“Then I had another dream of scoring a hundred in a Ranji final when my team needed it the most. That is why I got emotional after my century and had tears in my eyes, because my father has worked very hard. All the credit for my success goes to him. Without him, I would be nothing. He has never left my side.

“Many times, I feel bad thinking about him, because he has always stood by me. He is very happy. In life, some dreams get fulfilled even if it takes time, but I’m happy I have my dad who has bailed me out of tough situations.”

The century, Sarfaraz said, was dedicated to late Punjabi singer Sidhu Moosewala. As he got to the landmark, Sarfaraz slapped his thigh, pointed his index right finger to the sky – Moosewala’s signature move – and then belted out a roar towards his applauding teammates.

“I have a mindset that to score a century, I need to play at least 200 balls. I can’t have that mindset that this can be achieved hitting consecutive sixes. I can score big only after playing many balls. I tried to play three-four overs from each bowler. Once I start getting used to the pitch and know their plans, I know the runs will flow because I have all the shots.”

Sarfaraz hoped Mumbai would display “tremendous discipline” on Friday, the third day of the final, if they are to restrict Madhya Pradesh, who went to stumps comfortably placed at 123 for 1 in response to Mumbai’s 354.

“This match is not over yet, there’s a long way to go,” he said. “I’ll be jumping the gun if I say anything right now. I’m confident we can take the lead, but even we don’t, MP will be batting last in the fourth innings, and it won’t be easy for them.”

After two successive seasons of 900-plus runs, Sarfaraz is now firmly on the radar of the national selectors. However, he is focused firmly on the present. “As far as Team India’s selection is concerned, I’m working hard. My focus is to only score runs. Every person has dreams. It will happen if it is written in my destiny.”