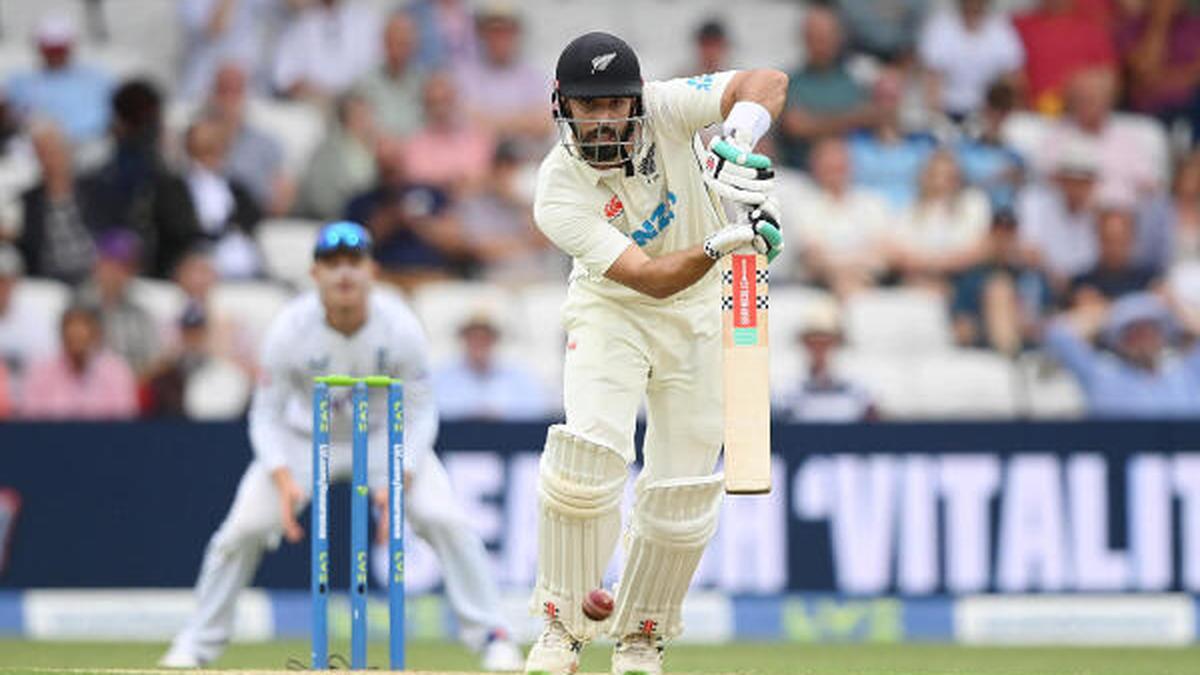 In-form Daryl Mitchell powered New Zealand’s revival after Stuart Broad struck early for England on the first day of the third Test at Headingley on Thursday.

New Zealand was 225 for five at close of play, with Mitchell 78 not out following his hundreds at Lord’s and Trent Bridge.


Those inspired efforts were insufficient to prevent the World Test champions falling 2-0 behind in the three-match series.

But Mitchell will aim to add another ton as the Black Caps try to salvage a victory in the series finale.

Broad, England’s spearhead after James Anderson was ruled out with an ankle injury, removed Tom Latham in the first over of the day and then captured the prize wicket of New Zealand captain Kane Williamson during a return of two for 45 in 17 overs.

Mitchell, however, held firm after coming in with New Zealand wobbling at 83 for four following Williamson’s decision to bat first after winning the toss under blue skies and on a good pitch.

He again received fine support from Tom Blundell (45 not out) in an unbroken stand of 102 — their third century partnership of this series.

England was looking to make it three wins out of three under its new leadership duo of captain Ben Stokes and Test coach Brendon McCullum, a former New Zealand skipper.

It may have been without Anderson, its all-time leading Test wicket-taker, but Broad still dismissed Latham for a sixth-ball duck after he edged straight to Joe Root at first slip.

Will Young and Williamson, back in action after missing the second Test in Nottingham with a bout of coronavirus, repaired some of the damage after coming together at none for one.

Williamson, on a ground where he had played for Yorkshire, drove Broad for four and Young cut a boundary off Jamie Overton, with the debutant Surrey quick preferred to twin brother Craig as the replacement for Anderson.

Spin, however, ended a promising partnership, when left-armer Jack Leach struck with his first ball, turning and straightening a delivery to have opener Young lbw for 20.

Broad then dismissed Williamson, whose fluent 31 had included five fours, when the star batsman edged an excellent leg-cutter to wicketkeeper Ben Foakes as the seamer took his 548th Test wicket.

Williamson, in a rare show of emotion, ripped off his glove in disgust.

Overton, presented with his England cap at the start of the day by his twin, got in on the act after lunch with his first Test wicket.

Devon Conway played on for 26, trying to drive a full-length Overton ball, to leave New Zealand in trouble at 83 for four.


“It would have been nice to play a Test with (brother) Craig but to get my cap from him was very special for us,” Jamie told Sky Sports. “It was a great feeling to get that first wicket.”

The struggling Henry Nicholls had made 19 off 99 balls when he fell in freak fashion on the stroke of tea.

Nicholls drove hard at Leach only for the ball to deflect off non-striker Mitchell’s bat and loop gently to Alex Lees at mid-off.

“It’s a silly game, isn’t it?” Leach, who turned 31 on Wednesday, told reporters after taking an economical two for 75 in 30 overs.

Mitchell might have been out for eight, however, but England, in one of several poor review choices, decided against challenging Matthew Potts’ rejected lbw appeal, with replays confirming the batsman would have been out.

Mitchell celebrated that escape by going to make a fifty off exactly 100 balls including two sixes.

There was more frustration for England when, after a brief rain break, Overton believed he had Mitchell caught down the legside by Foakes for 60, only for England’s review to reveal the batsman had missed the ball.