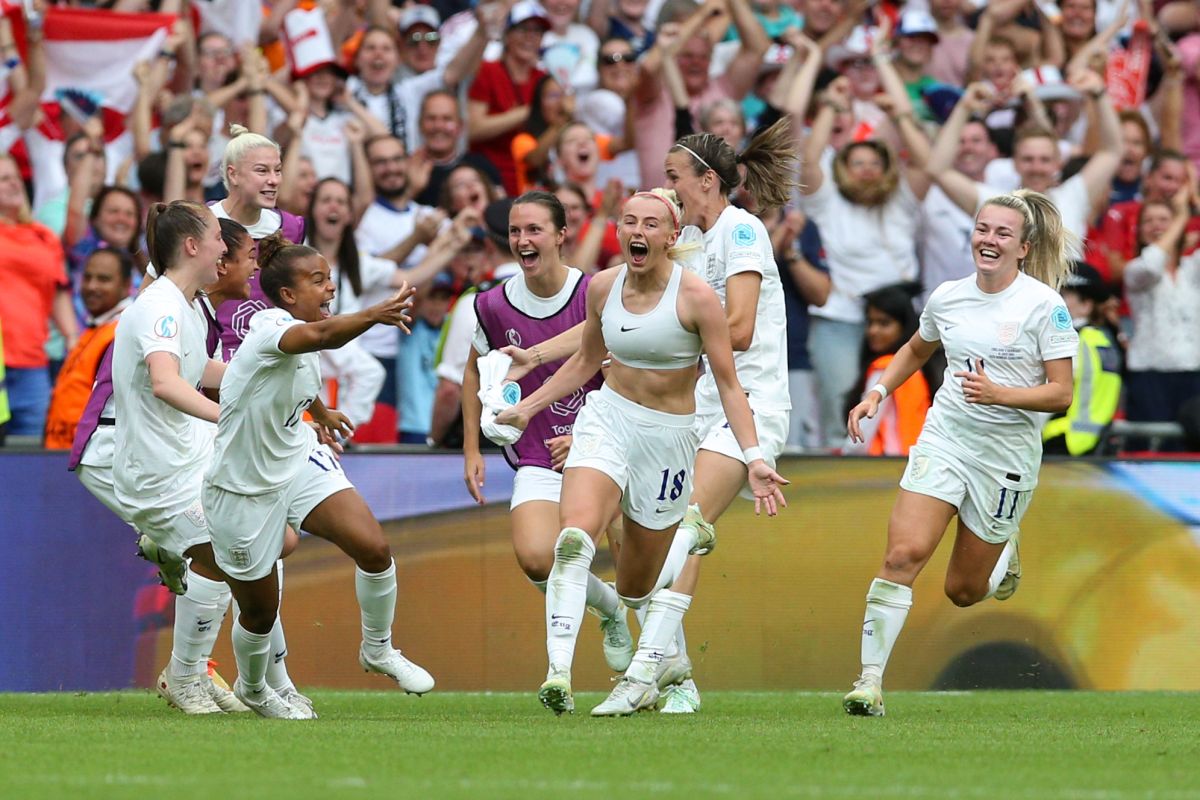 England’s Euro 2022 dream became reality as substitute Chloe Kelly’s extra-time finish saw the Lionesses beat Germany 2-1 and secure the first major trophy in their history in front of a record-breaking crowd at Wembley.

Kelly prodded the ball past Merle Frohms in the 110th minute to restore the tournament hosts’ lead after fellow substitute Ella Toone’s wonderful lobbed opener just after the hour mark.

Eight-time champions Germany – who had lost star forward Alexandra Popp to injury in the warm-up – equalised with 11 minutes of normal time remaining through Lina Magull, and the game looked on course for a penalty shoot-out until Kelly’s effort fired Sarina Wiegman’s side to glory.

A year on from the men’s team losing their Euros final at the stadium on penalties to Italy, England can celebrate the first piece of major silverware for a senior side since the men’s 1966 World Cup triumph over West Germany.

And there was jubilation at the final whistle as the players tried to take in what they had done amid an almighty roar from the 87,192 crowd – the biggest-ever attendance for any Euros match, men’s or women’s.

Meanwhile, boss Wiegman could savour back-to-back Euros successes after overseeing the Netherlands’ triumph on home soil in 2017. Her record in charge of England after taking up her post last September has been near-flawless – 20 games, no defeats, 18 wins, 106 goals scored and only five conceded.

It was a third appearance in a Euros final for the team, and first since losing 6-2 to Germany at Euro 2009 in Finland.

The English women’s game has been on a journey of considerable growth in the intervening years, with the sense of momentum certainly apparent over the last few weeks as Wiegman’s team have thrilled large stadium crowds and television audiences – and there will be sky-high hopes for what the future holds after this historic moment.

There was also a personal triumph for Beth Mead, who claimed the Golden Boot after finishing the tournament with six goals – the same amount as Popp, with Mead taking the prize due to her superior assists tally.

Mead looked very much on for the accolade from just ahead of kick-off as the big news emerged that Popp had sustained what Germany described as “muscular problems” in the warm-up and was being replaced in Martina Voss-Tecklenburg’s starting line-up by Lea Schuller.

Wiegman, meanwhile, completed a clean sweep of unchanged starting line-ups through the Euros.

Her team then made a lively start, with Ellen White having a header caught by Frohms and the goalkeeper then just keeping a lofted delivery from the right from crossing the line with White hovering.

Germany’s Sara Dabritz tried her luck with one shot that was headed away by Lucy Bronze and another that went wide, before Bronze’s header at the other end was dealt with by Frohms.

England fans then held their breath as a Germany corner led to a goalmouth scramble which ended with Mary Earps claiming the ball. A subsequent VAR check found no cause for a penalty, and there was also nothing given when the ball bounced off Schuller in the other box moments later, despite appeals from the crowd.

The Lionesses then went close in the 38th minute as Mead laid the ball to White and she put her shot just over the bar.

Voss-Tecklenburg adjusted things at the break by bringing on Tabea Wassmuth, who burst forward three minutes after the restart, following a mix-up between Bronze and Millie Bright, but could only send a shot straight to Earps, and there was another nervy moment for England soon after as Magull shot wide from a good position.

Wiegman responded by making a double change as Alessia Russo and Toone came on for White and Kirby.

The manager has seen her substitutions pay off a number of times during the tournament – and it happened again within minutes as Toone added to the goal she scored off the bench against Spain in the quarter-finals to put England in front.

The Manchester United midfielder latched on to Keira Walsh’s excellent long pass in the 62nd minute and sent an expert chip over Frohms as delirium broke out around Wembley.

The England mood swiftly changed to relief as Magull cracked a shot against the post and Schuller’s follow-up was saved by Earps.

And after exerting further pressure, Germany then got back on level terms when Magull received the ball from Wassmuth and poked it past Earps.

Jill Scott, part of the England team in the Euro 2009 final, came on in the closing stages before the contest entered extra time, the first half of which then saw her survive a VAR check when she blocked a Svenja Huth shot.

A nervy atmosphere then gave way to another eruption of noise five minutes into the second half of extra time as once again a Wiegman substitute made a positive impact – and there could be no greater.

Lauren Hemp swung in a corner, the ball came off Bronze and Manchester City winger Kelly – who had replaced Mead shortly after Toone’s goal – took two swings at it, with the second going past Frohms.

With Wembley rocking, Germany tried to hit back but struggled to muster much before the final whistle confirmed that the Lionesses’ long wait for a trophy was over.