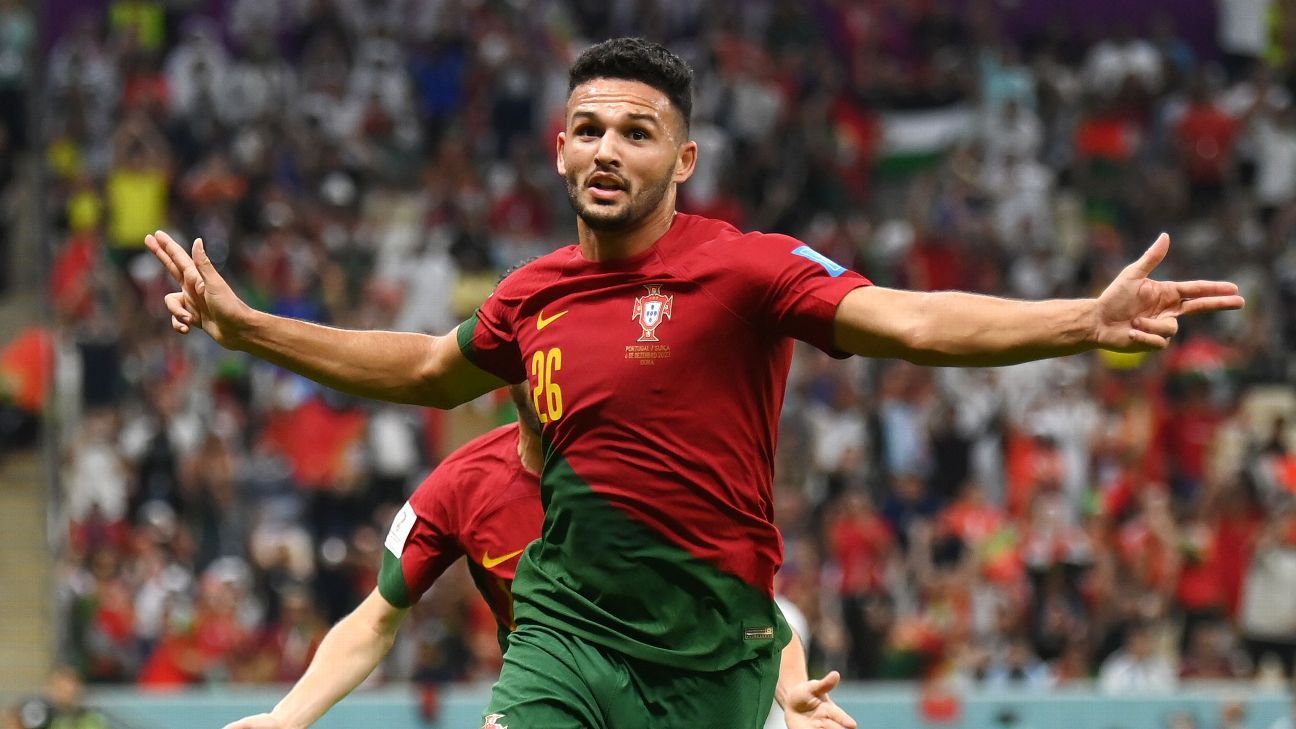 Portugal have found a new star, as Goncalo Ramos announced himself on the international stage with a hat trick in the 6-1 win over Switzerland in the World Cup round of 16.

Ramos, 21, had only played 23 minutes of international football — scoring a goal and grabbing an assist in a 4-0 friendly win against Nigeria in November 2022 — before being taken to Qatar 2022. However, he needed little time to make his mark on the World Cup on Tuesday night as he was named as a replacement for Cristiano Ronaldo, who was dropped after an altercation with coach Fernando Santos.

The Benfica striker came off the bench briefly in the games against Ghana and Uruguay, but mustered only 10 minutes in those games before being an unused substitute against South Korea.

But, thrust into the first XI to replace Ronaldo against Switzerland for his full international debut, he opened the scoring in the 17th minute at the Lusail stadium with a rocket strike inside goalkeeper Yann Sommer‘s near post.

After half-time, Ramos struck again as he got on the end of defender Diogo Dalot‘s low cross in the 51st minute, before helping tee up Raphael Guerreiro‘s goal four minutes later. He then completed his hat trick with a deft chip over an onrushing Sommer, becoming the youngest male player to score three goals in a World Cup knockout match since Brazil legend Pele in 1958.

Ramos came through the Seixal academy and for Benfica fans his exploits are well known as he has scored 14 goals in 21 games so far this season, already beating his eight in 46 in what was a breakthrough year last campaign.

The striker has played a big part in replacing Darwin Nunez, who moved to Liverpool for €100 million in June, so what can Benfica and Portugal expect from him going forward? We dig into the data with former scout Tor-Kristian Karlsen.

Goncalo Ramos at Benfica since 2019

Initially positioned as a withdrawn / supporting forward behind Nunez or Roman Yaremchuk at Benfica, he was moved to a more traditional centre-forward role at the beginning of the season to great effect. — Karlsen.

Ramos’ international career is only four games old so far, but already he has made a big impact at the 2022 World Cup.

Though still roaming in his interpretation of the centre-forward role — he often makes ground by dribbling — Ramos has particularly impressed with his ability to finish quickly with either foot, his fine first touch allowing him to set up quick, neat finishes. He excels at picking the right spaces in the box and pulling away from his marker at the right moment, with a few of his goals coming from tap-ins.

Having previously played deeper, Ramos is also a clever combination player who can set up the initial attacking action as well as getting on the end of it. Though not lightning quick, his ability to time his movement often sees him pulling away from defenders when playing off the shoulders of the centre-backs. 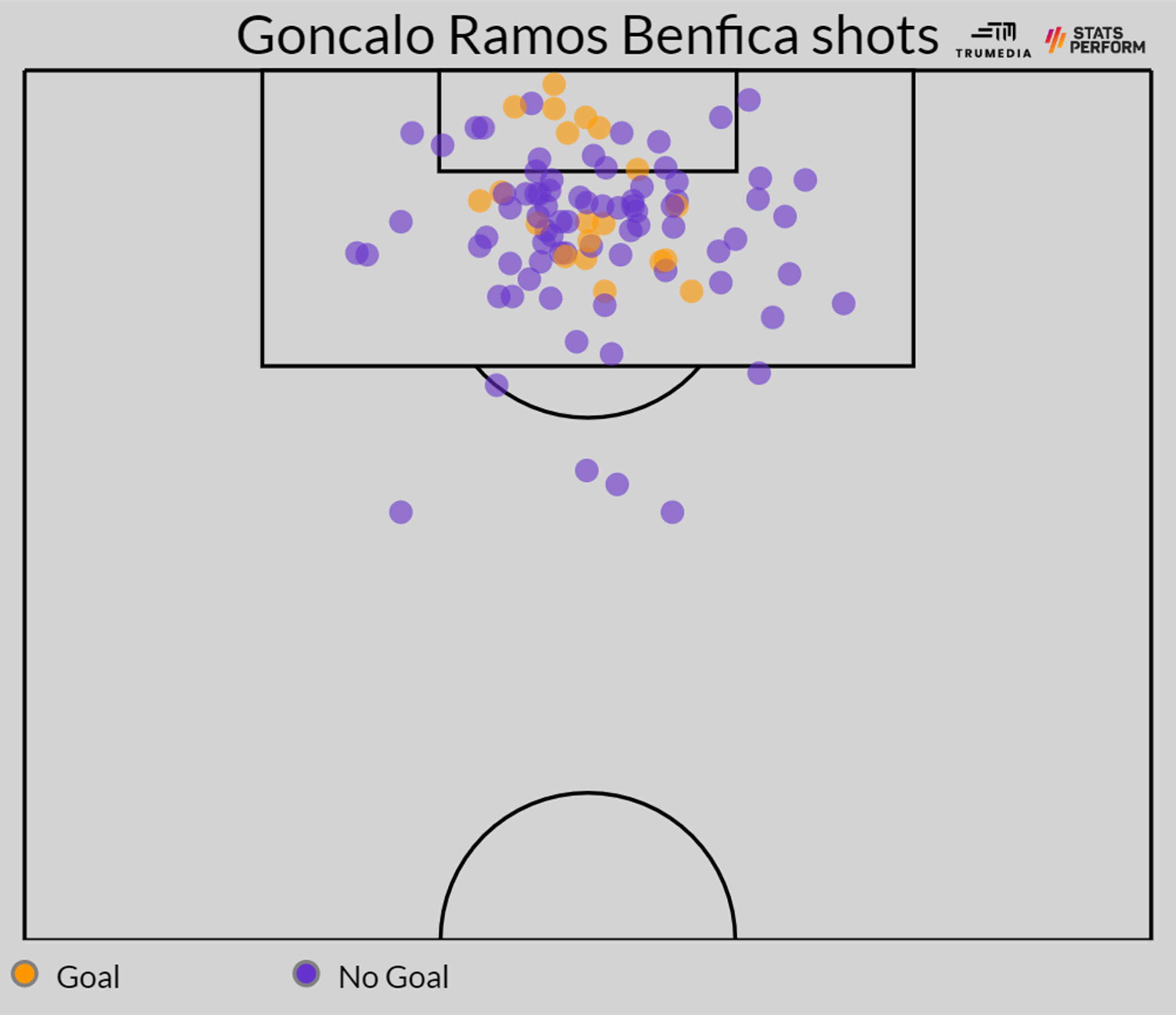 How he can improve

For a 21-year-old in his first season as a regular, Ramos has sharpened practically all aspects of his game. Though avid in his pressing duties, he could become even more assertive in attacking duels by adding an element of “cynicism” to his game.

Currently tending to score in streaks (albeit his present ratio is impressive), time will show whether he can become a consistent goal scorer at the highest level. — Karlsen

Goncalo Ramos: “I think not even in my best dreams I thought about being part of the starting XI for the knockout phases. Cristiano Ronaldo is our leader. He’s the captain, he’s the leader and we always look forward to playing side by side with him. He is my reference and an idol to many of us. Cristiano Ronaldo, [Robert] Lewandowski, [Zlatan] Ibrahimovic — those players are my role models.”

Who has he been linked with?

Ramos was linked with moves to Manchester United and Newcastle United in November, while PSG and Wolves have also reportedly been looking at him, but Brighton showed an interest last summer.

Benfica had reportedly wanted at least €40m from interested clubs, but that figure is likely to have increased after his efforts in Qatar. He reportedly has a €120m release clause in his contract, which expires in 2026.