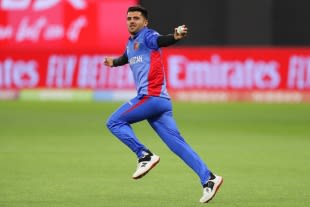 Farooqi bowled superbly in the T20 World Cup, picking up 1 for 24 against England and 2 for 29 against Australia while conceding just 6.52 runs per over across the three games he played.

Thunder general manager Andrew Gilchrist said the club were delighted to add the left-armer to their squad after Willey had withdrawn.

“Fazalhaq Farooqi is an emerging talent,” Gilchrist said. “He joins Thunder in great form after playing exceptional cricket in the World T20 Cup and the Asia Cup tournament.

“While it was very disappointing to have lost David Willey, it has opened the door for Farooqi to further enhance his reputation and growing status in world cricket.

“Afghanistan has enjoyed a tremendous representation in the BBL over the years. Rashid Khan has been embraced by Adelaide Strikers fans as a genuine superstar and adopted South Australian, while others, including Zahir Khan, Noor Ahmad and Mohammad Nabi, Mujeeb Ur Rahman and Qais Ahmad have made their marks.

“We fully expect Fazalhaq will only further enhance the growing reputation of cricketers from Afghanistan being fearless cricketers and extraordinary entertainers.”

Thunder are likely to add another overseas replacement player later in the tournament when Alex Hales departs for the ILT20 in the UAE.