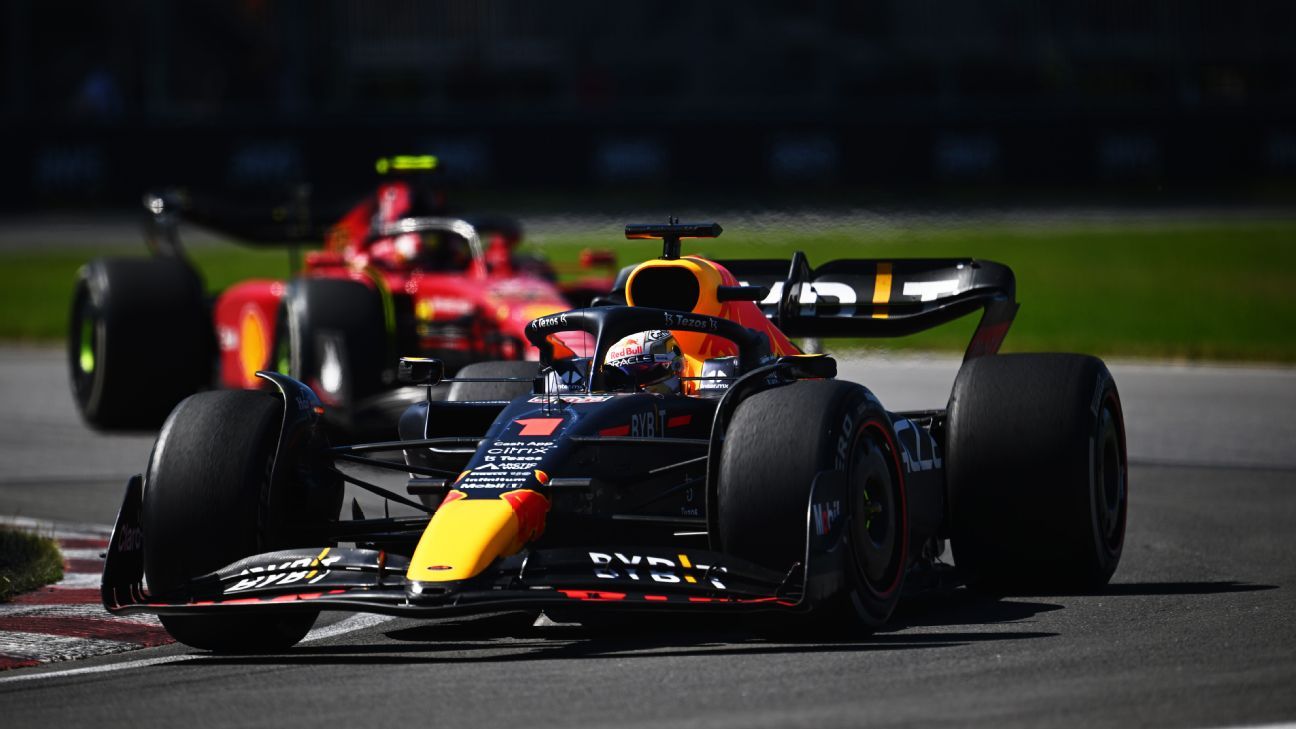 In the seven races Verstappen has finished this year he’s won six times. At Sunday’s Canadian Grand Prix, he was made to work for victory right until the line, with Ferrari’s Carlos Sainz chasing him close for 15 laps at the end and finishing 0.9s behind at the chequered flag.

In what is becoming something of a Verstappen hallmark, the reigning world champion was ice cold under that pressure, almost metronomic, lap after lap. He showed it on several occasions last year in similar situations with Lewis Hamilton.

In Montreal, Sainz was unable to get close enough to overtake Verstappen and the mistake he needed to seize the moment never materialised.

“Max is in the form of his life right now, absolutely clinical,” Red Bull boss Christian Horner said after the race.

Horner later added: “He drove some amazing races last year under massive pressure, you think back to Austin and so on. I think he’s been so good under pressure, we’ve seen it so many times this year, Miami, Baku, etc etc. He’s got more experience and he’s just a very complete driver”.

Verstappen was 46 points behind Charles Leclerc after the Australian Grand Prix in April, having suffered two reliability issues in the opening three races. Verstappen’s lead over Red Bull teammate Sergio Perez is now the same amount, with Leclerc, who hasn’t won a race since Melbourne, a further three points back.

It’s effectively a buffer of two whole race victories over his nearest rivals, but F1’s bloated calendar means we are still not at the half-way mark in the season — there are still 13 races left between now and the end of November. While it is easy to start scanning down the schedule of remaining events to see how early Verstappen might wrap things up on this current trajectory, he is not taking anything for granted.

“It’s still a very long way,” Verstappen said in the post-race press conference. “I know the gap of course is quite big, but I also know that it can switch around very quickly.

“I mean, [after] race three I was 46 behind, so we just need to stay calm, we need to focus and we need to improve because today we’re not the quickest.”

Ferrari agreed with Verstappen’s assessment on pace. The team felt it had the quickest car on race day, which flips what the narrative of the season has been so far.

While Leclerc has dominated in qualifying on Saturdays, recently it has been Verstappen and Red Bull who have usually had the faster race package and they have six consecutive victories to show for it.

Ferrari’s chances of capitalising on that quick race car were hampered from the start of the race weekend, with Leclerc taking a back-of-the-grid penalty for a wholescale power unit change, a consequence of the team’s mounting reliability issues.

Sainz, whose season has been disappointing to this point, was the man left to stop a Red Bull victory but he could only start on the second row after being out-qualified by Alpine’s Fernando Alonso in the wet.

That meant Verstappen was allowed to scamper away at the start without any pressure from behind as Sainz took a little while to get past the slower Alpine. Sainz did lead at one stage as he and Verstappen went on offset strategies, but both Ferrari and Red Bull doubted Sainz was on the one which would win the race.

The late Safety Car brought Sainz into a perfect opportunity and he said he left nothing on the table as he harassed Verstappen in the final laps.

“I gave it all,” the Spaniard said afterwards. “I was risking everything, you know, over the kerbs, close to the wall and having a few moments out there in the dirty air.

“I got close a couple of times, but not enough to really throw a move down the inside anywhere. But I can tell you I was pushing.”

Given how Sainz has struggled this year, it was easy to wonder if the outcome might have been different if it had been Leclerc chasing Verstappen down at the end. Binotto welcomed Sainz’s improved race but pointed out he hurt his chances of a first F1 win on Saturday.

“I think that Carlos had a strong race today. Good pace, good drive and, as he said, I think he at times was very, very close and so we can be very happy today that he is getting more and more confidence,” Binotto said.

“To win today with such a close fight with Red Bull and Max you need to be perfect for an entire weekend. If anything then yesterday the qualifying was not perfect from Carlos and that cost him a bit maybe today. Because being ahead or chasing is certainly a different matter.”

That statement is true. Beating Verstappen at the moment requires a flawless weekend and Ferrari have been found lacking across the board in strategy, reliability and, in the case of Sainz on Saturday and Sunday, the performance required to beat him, too often over the past two months.

Leclerc showed at the start of this season he is capable of stringing together a Verstappen-beating weekend and he still looks like the most likely candidate to take the fight to the Dutch driver across the year, especially if Ferrari keeps delivering a quick car on Sundays.

Speaking of his 49-point deficit in the championship, Leclerc said: “It motivates me. It motivates me because of course I know the pace is in the car.

“I’m not worried, I’m just extremely motivated to finally have a clean weekend and show that we are here and we are strong. So yeah, in Silverstone hopefully we can do that.”-

Can Ferrari overcome its issues?

Ferrari has a mountain to climb in both championships and it is still trying to overcome its reliability issues. Customer team Haas and Alfa Romeo are growing frustrated by Ferrari’s issues and Mick Schumacher’s retirement from a promising position in Montreal was put down to a power unit failure.

Reliability can be a two-way street and it wasn’t long ago it looked like Red Bull, not Ferrari, could lose a championship through car troubles. Perez’s failure to finish the after a suspected gearbox failure is a reminder Red Bull are not immune to issues of their own.

“Reliability I don’t think will be the only factor, I think development between now and the end of the season is another one as is the budget cap and reliability also,” Binotto said on Sunday evening.

“The power unit is a completely new design compared to the past and the problem that we have is because we have got a young project and on top of that we have limitations on the dynos that were not there in the past, so we cannot run that much on the dyno, we are limited. That means the exercise is more complicated.”

Of course, Red Bull is constrained by the same budget cap, but with a healthy points lead, fewer reliability issues to worry about and a superstar driver seemingly getting better with every passing weekend, it is already feeling very much like the Milton Keynes team’s championships to lose at this point.