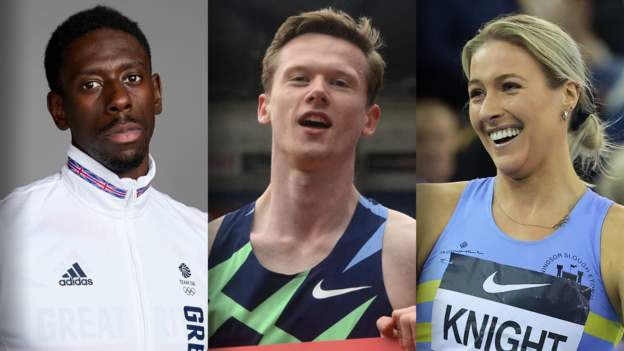 British athletes have never had it so busy.

The backlog caused by the pandemic means a triple-whammy of major events with next month’s World Championships in Oregon followed in quick succession by the Commonwealth Games in Birmingham and the European Championships in Munich.

Before they can take on the world, though, there are some domestic dust-ups to sort out.

The British Championships take place this weekend at the Manchester Regional Arena with places on the plane to Oregon on the line.

Former world and Olympic medallist and BBC Sport commentator Steve Cram has picked out five events to keep an extra-close eye on.

In terms of strength in depth, this is probably the Championships’ most formidable event. Even the heats will be tasty, never mind the final.

Max Burgin is the fastest man in the world this year and is running brilliantly. It is no surprise. He may have only turned 20 in May, but he has been a wonderful talent for a good few years already. He has broken so many age-group records and is just yet to convert that to a senior season.

This is a huge opportunity for him, both this weekend in the trials and then to take it on and mix with the world’s best at the World Championships in Eugene next month.

He is a committed frontrunner. He likes to go off hard. However the trials, with heats to put into the equation as well, tend to be more tactical.

There are likely to be four heats with only the winner going through automatically. That means that some of the main contenders are going to have to face off and race hard well before the final.

As well as Max, look out for Kyle Langford, the next fastest Briton in the world this year, 20-year-old Ben Pattison, who has impressed with some really shrewd runs this year, and Thomas Staines, who is based out in the United States and has been performing well.

Elliot Giles and Daniel Rowden both went to the Olympics last year, but neither has had an ideal build-up.

Giles started the year well, but had injury problems at the end of the indoor season and has struggled to put those behind him. Rowden stepped off after 400m in his most recent race, a fortnight ago.

I’m not sure if it was illness or injury, but it doesn’t instil you with confidence.

Keely Hodgkinson’s win in this event was one of the highlights of the 2021 Championships.

As the reigning Diamond League champion, she gets a straight pass into the World Championships so won’t be running in Manchester.

Jemma Reekie will be. The Scot was fourth in the Tokyo Olympic final last year, but has taken some time to shrug off the glandular fever she picked up in the indoor season. She has had some inconsistent performances but I think is gradually getting back to her best.

Laura Muir, who raced over 800m in the 2021 British Championships before winning a silver medal over 1500m in Tokyo, is concentrating on the longer distance in Manchester this weekend, but Alex Bell, another 800m finalist from Tokyo, will line up against Reekie.

Also in there is Jenny Selman, who beat Reekie in the British Indoor Championships earlier this year.

The qualifying time to make the World Championships in this event is really tough so there are one or two contenders, like Ellie Baker, who still need to hit that target. It will be really interesting to watch.

You have 2019 national champion Neil Gourlay. I expect George Mills, son of former footballer Danny, to go well after getting to grips with the 1500m via some great displays on the European circuit.

Piers Copeland has been a little up and down since the indoor season. Matt Stonier has been running well.

There is the possibility that Elliot Giles might opt to switch from the 800m to the longer distance. Either way there are five or six contenders and they can’t all go.

However, there have been some suggestions that McLaughlin is carrying an injury so it will be worth keeping an eye on the American trials that are also happening this weekend.

For Britain, we have two women in the top 12 in the world this year: Jessie Knight and Lina Nielsen.

Nielsen has really hit some good form this year, while Jessie ran a 54.09-second personal best in May.

The two of them are pushing each other on the domestic front and I expect them to finish first and second. It will be a great duel to sort out who fills which position though.

Dina Asher-Smith will be the big draw in the women’s 100m, but I think the men’s race is the more intriguing.

After an indifferent start to the season, Reece Prescod hit form in dramatic style, setting a new 9.93-second personal best in Ostrava in May.

Tokyo finalist Zharnel Hughes is in there, while I think Nethaneel Mitchell-Blake and Adam Gemili, entered for the 200m, might try and do both events.

They will be conscious that this may be a bit of an audition for the relay team. With CJ Ujah banned and Richard Kilty injured there are some vacancies there.

Watch out for Jeremiah Azu,who has just turned 21 and won European under-23 gold last summer.