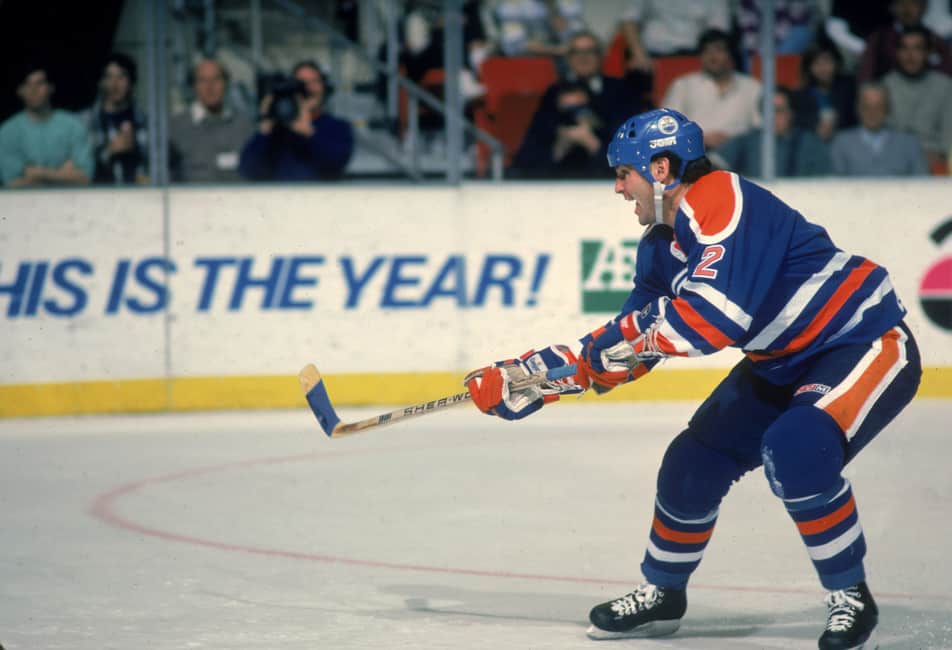 On Thursday (Nov. 3) at Rogers Place, the inaugural class of the Edmonton Oilers Hall of Fame was inducted during a pre-game ceremony before the Oilers’ 4-3 loss to the New Jersey Devils.

Joining those Oilers icons in the inaugural class were Ryan Smyth and Lee Fogolin. The pair of former players were voted in by the Oilers Hall of Fame selection committee, which will choose a maximum of three inductees annually. Players, coaches, trainers, staff, executives, or any other person with a role or service in the history of the organization is eligible for nomination.

Related: 3 Oilers Greats That Should be Next Inductees Into Team’s HOF

Fogolin was a much less obvious pick, especially for fans not old enough to remember when the American blueliner played for the Oilers between 1979 and 1987. After all, a quick glance at his resume doesn’t scream first-ballot Hall-of-Famer.

What Makes Fogolin a Hall of Famer

Take 10 different individuals, and you’ll probably get nine different definitions of what makes a player worthy of such an honour. Factors like longevity, team success, or individual accolades will all hold varying degrees of importance. And in any of those criterion, Fogolin’s credentials are good, they just don’t stand out from those of any other number of Oilers HOF candidates.

He suited up for 586 regular season games in orange and blue, the 17th most in franchise history. He won two Stanley Cups with Edmonton, which is less than 11, and tied with nine players who are not part of the inaugural class. He played in one All-Star game during his Edmonton tenure; 30 other players have appeared in at least one midseason classic as a member of the Oilers.

So then why would anyone believe Fogolin deserves to go into the Oilers HOF before Charlie Huddy and Randy Gregg, who were part of all five of Edmonton’s Stanley Cup-winning teams? Or ahead of Doug Weight, who led the Oilers in points for a season seven times? Or what about Bill Ranford, who won the Conn Smythe Trophy with the Oilers in 1990? One word: leadership.

During the Oilers’ first few NHL seasons, Fogolin had an essential role in the evolution of a group of preposterously talented but inexperienced kids into a hockey dynasty. The incredible manner in which Fogolin handled his position as captain culminated with a pivotal moment that set the franchise on course for five Stanley Cup victories in seven years.

When the Oilers claimed Fogolin in the 1979 NHL Expansion Draft, the defenceman was 24 and had already played five seasons with the Buffalo Sabres. That made Fogolin a veteran in a locker room that included the likes of 18-year-olds Gretzky and Messier, whose only previous pro experience was a season each in the World Hockey Association.

There was also Lowe, then a 20-year-old rookie straight out of junior. Right from the beginning, he was paired with Fogolin, and they would spend several seasons together as Edmonton’s top shutdown duo. During his Hockey Hall of Fame induction speech last year, Lowe made a point of thanking his old partner, calling Fogolin a mentor.

Almost mythically tough (he once used a curtain rod hook to yank the cap off an infected tooth (from ‘Hall of Famer Fogolin ‘set the tone for everybody, on the ice and off’, The Edmonton Sun, 11/03/22)) and never taking a night off (in the seven seasons from 1979-80 to 1985-86, he missed only nine games and played the entire schedule five times), Fogolin was always a leader by example. And for a crucial time, he was also a leader in title.

Fogolin became the third captain in Edmonton’s NHL history late in the 1980-81 season when his predecessor Blair MacDonald was traded to the Vancouver Canucks. He was wearing the ‘C’ when the Oilers suffered their first crushing defeat, being upset by the Los Angeles Kings in the first round of the 1982 Stanley Cup playoffs, and their first trip to the Stanley Cup Final, in 1983 when they lost 4-0 the New York Islanders.

Fogolin Passes the Torch to Gretzky

After the Oilers were unceremoniously swept by the Isles, Fogolin sensed a change was needed. Gretzky was now five seasons into his already legendary pro career and was now ready to lead the Oilers into battle just as he led them in scoring. Prior to the 1983-84 season, Fogolin relinquished his captaincy to No. 99 before the 1983-84 season, explaining that “maybe a change like this will help us win the Stanley Cup.” (from ‘Oilers ’84: When Gretzky Was Named Captain’ The Edmonton Sun, 10/06/14) He was right.

Edmonton won the next two Stanley Cups and four of the next five with Gretzky as captain. Ultimately, the Oilers would capture the Stanley Cup five times between 1984 and 1990, shepherded by a core of veterans who spent their formative years studying at the Lee Fogolin School of Leadership.

Fogolin’s remarkably selfless act, recognizing Gretzky’s time had arrived and not only willingly surrendering his position but initiating said transfer of power, was a greater act of leadership than anything the defenceman might have done had he remained captain.

Alas, Fogolin was only around for two of the Oilers’ championship triumphs, 1984 and 1985. He was dealt in March 1987 to the Sabres, along with Mark Napier in exchange for Normand Lacombe and Wayne VanDorp. He played only a handful of games with the Sabres and retired at the end of the 1986-87 season at age 32.

On Thursday night, Fogolin was overshadowed by the big-name Hall-of-Famers in the house, and Smyth, who seems to become only more popular in Edmonton. He’s still not a star, but players of his ilk never are, not during their playing careers and certainly not in retirement.

But his name belongs in the same breath as Gretzky, Messier, et al. And now his name is next to theirs in the Oilers HOF. And that’s forever.