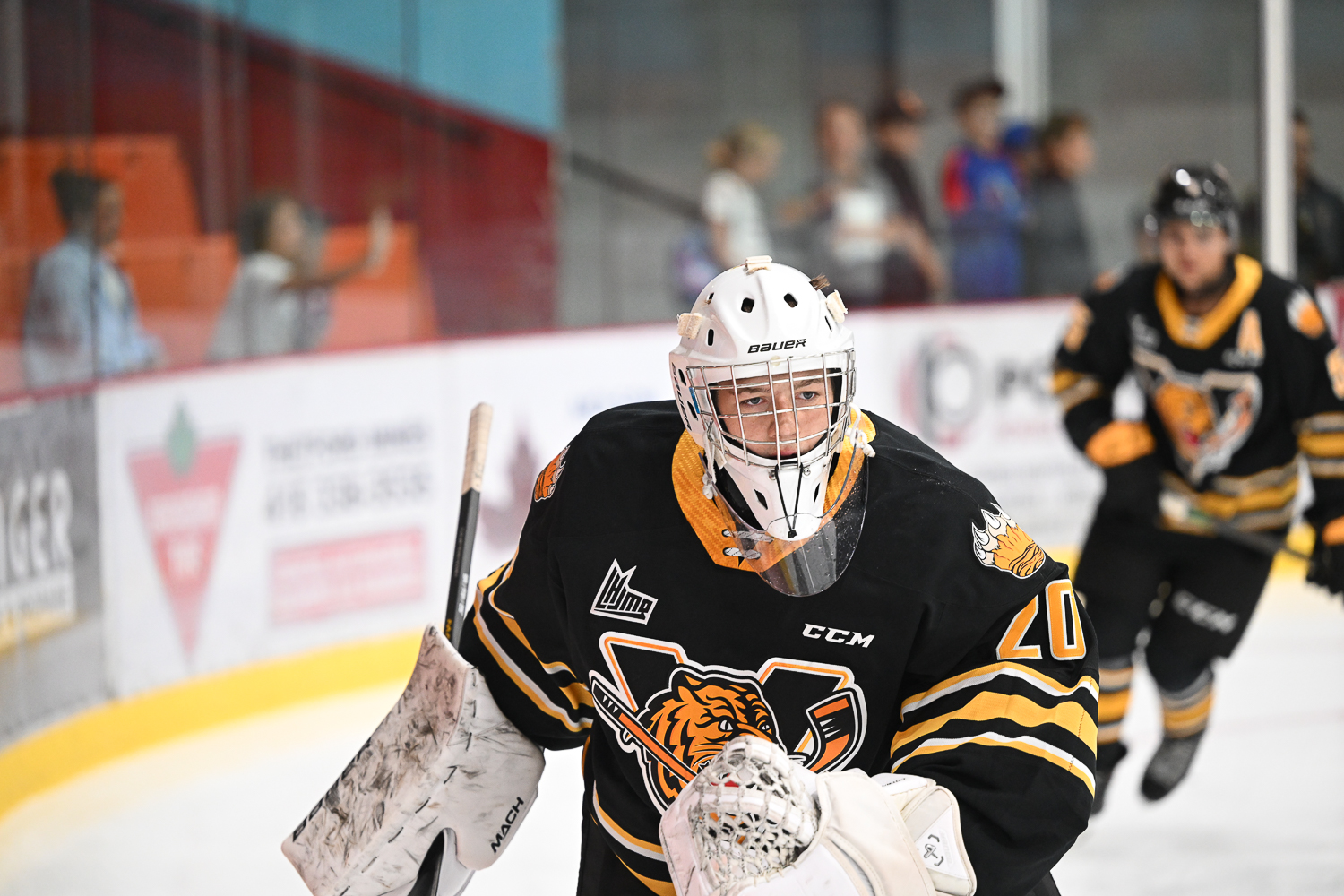 Like most of us, I’ve burnt a lot of evenings going down the YouTube rabbit hole. It was a few years ago now, watching various hockey highlights with the occasional silly video thrown in. Eventually, my next recommended video was of a 10-year-old kid in some goalie equipment in his parents’ basement. He was running various drills and the video had amassed around a million views. His movements looked strong, and he clearly had a pretty dedicated setup. But like most “child prodigies” you see online, you tend to write them off. For Gabriel D’aigle, I didn’t. Now that he’s grown up a bit and joined the Quebec Major Junior Hockey League (QMJHL), I don’t think you should either.

The video that hit over a million views showed D’aigle at the age of 10. With all young players being highlighted like that, there are two questions. Can they stick with their regiment to keep advancing and can they grow to the correct frame to fulfill their athletic potential? While we continue to see an influx of “undersized” forwards in the game, goalies still maintain a rather large average size. While D’aigle showcased some of his balance work, his movement technique, and some rather unorthodox training methods, the question of size burned in the back of my head. Now, just before turning 16, he’s listed on his QMJHL team roster as standing 6-foot-4.

D’aigle played youth hockey in a AAA league in Quebec. Stats can be difficult to acquire for these leagues, but Elite Prospects lists his final year before being drafted into the QMHJL as having a 2.59 goals-against average (GAA) and .919 save percentage (SV%) in 24 games. In that draft, he went second overall to the Tigres de Victoriaville. While their season is still young, he’s so far played five games.

He’s managed to secure a shutout and holds a 2.33 GAA and .920 SV%. That’s good for sixth in the league among goalies with at least five games played. It’s far too early to try and extrapolate from these stats, but the QMJHL can be notoriously hard for goalies to adjust to. The seemingly ageless Marc-Andre Fleury carried a 4.05 GAA and .886 SV% through his first season in that league.

Movement Is the Key to D’aigle’s Performance

When watching D’aigle play, the most immediate thing that jumps out is the consistency and athleticism in his movements. With his current 6-foot-4 frame, the ability to move laterally with precision is a major boon to his performance. His ability to move across the crease is strong for someone of his age and size. With proper development, this can continue to be advanced. For junior goalies, the mechanics of these movements are difficult to lock in. As they deal with growth spurts, they need continual work on precise movements, particularly when sliding across in the butterfly.

D’aigle has incredibly strong lateral transitions and continues that precision when moving in and out of the butterfly. One of the areas he will need to work on is recovery. He can have a bit of a tendency to overcommit on an initial save attempt and then scramble back if he gives up a bad rebound or if the shot changes. In his shutout against the Saint John Sea Dogs, he made some fantastic saves but on more than one occasion was caught out of position and had to make some desperation moves. As he faces stronger competition throughout his career, these follow-up saves become increasingly difficult to make.

What’s Next for D’aigle?

Goalie development is a fickle thing. There are signs of who will be successful, but there are no shortages of highly touted goalie prospects who never pan out. It’s a difficult position to draft and develop. For D’aigle, these next few seasons are critical not just for his development personally but to define his game as a standout goalie. If he wants to have an impact and garner first-round attention, he’ll need to prove himself as an almost sure thing. For the Tigres, the timing couldn’t be better. They’re coming off finishing last in their conference, just one year after winning the top trophy of the QMJHL – The President’s Cup.

With a team looking to build around him, he’s sure to get as much support as he needs. D’aigle is no stranger to hard work based on the history of his YouTube uploads. There’s never a sure thing, but he has all the tools to be an elite netminder. Fleury, Patrick Roy, Roberto Luongo, Jaques Plante, and even Georges Vezina all hailed from Quebec. There’s no shortage of stars for D’aigle to look up to. There is a lot to learn about him, but when the 2025 NHL Draft rolls around, I’ll be keeping my eye out for where he goes.

Devin resides in Ontario, covering the Ottawa Senators for The Hockey Writers. He’s interested in where the eye test intersects with advanced stats and is on a quest to make a formula to determine who really is the best overall defenseman.