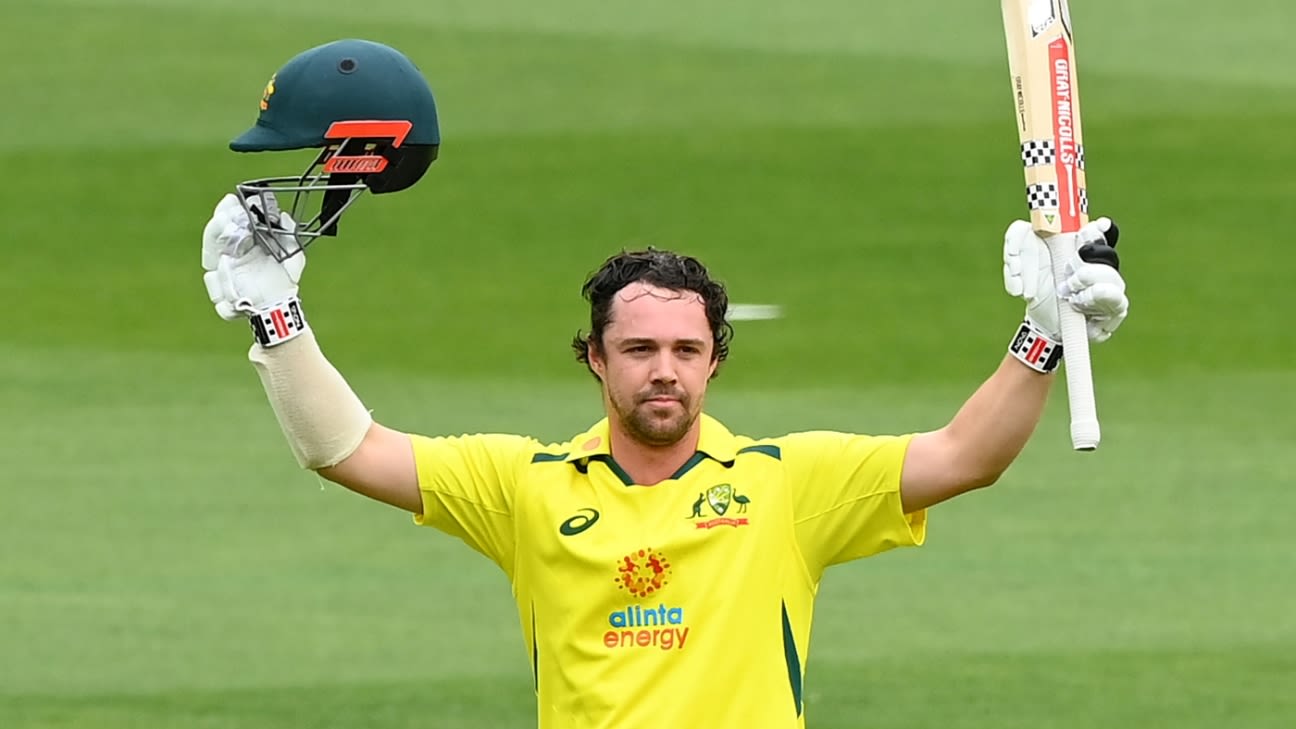 Life after Aaron Finch is proving a breeze for Australia with new opening pair Travis Head and David Warner piling up twin hundreds in a record-breaking partnership to hammer a listless England in the final ODI at the MCG a secure a series whitewash.
The pair put on a stand of 269 in 38.1 overs, falling just short of their own Australian record ODI partnership of 284, to underpin Australia’s imposing total of 355 for 5 after the innings was reduced to 48 overs due to rain. They broke a host of records including becoming the second duo in ODI history to post two 250-plus runs stands behind India pair Sachin Tendulkar and Sourav Ganguly.

Head continued his dominant year in ODI cricket scoring 152 from 130 balls, his second century and third overall, while Warner made 106 from 102 to post his first century for Australia in any format since January 2020, breaking a 68-innings drought. Head’s innings was even more extraordinary given he was fighting gastro, having struggled to take on food and fluids pre-game, and was unable to field.

England are booked on a 6am flight out of Melbourne on Wednesday morning and played like they were already waiting for it as they slumped to their largest ODI defeat after winning the toss and electing to field. England’s intensity matched that of one of the smallest ODI crowds ever at the MCG of 10,406, on a miserable cold and wet Tuesday night in November, with the dead rubber resembling an Australian domestic one-day fixture. It was the lowest crowd at an MCG ODI since 1979. Two rain interruptions only dampened the mood further. All of England’s bowlers were collared at more than six runs per over. Olly Stone took four of the five wickets to fall but finished with the extraordinary figures of 4 for 85.
Their chase was equally poor in pursuit of a DLS-adjusted target of 364, albeit they had the tougher of the batting conditions as the ball nipped and swung under lights. But it didn’t excuse a lack of intent from the top three and then a slew of poor shots from the middle-order as they folded to be bowled out for 142 in just 31.4 overs. Adam Zampa picked up 4 for 31 as all five Australian bowlers shared the wickets. The final margin of 222 runs surpassed England’s previous biggest loss of 219 runs. Australia could have ended the game sooner if they had not dropped four catches.

Like Australia, England found some swing early on with the new balls on an overcast afternoon and Head enjoyed several slices of luck. He twice edged behind, flashing hard outside off stump, as one flew safely through a vacant third slip and the other escaped the grasp of Liam Dawson at second as he jumped high to his right. Head was also given out lbw onfield to Chris Woakes but had it overturned on review as it was pitching outside leg.

From there Head found another gear, lashing England’s bowlers to all parts of the MCG on what turned into an excellent batting surface. Not even a brief rain delay could slow his momentum.

The early swing subsided, and he feasted on the easy pace of England’s seam attack. He smashed 16 fours and four towering sixes, to reach his century off just 92 balls in the 27th over, celebrating by rocking his bat like a baby in acknowledgment of his recently born baby girl.

Warner was the silent partner for a large part of the partnership. He was on 62 when Head reached his century having barely taken a risk. He breezed to his 19th ODI century, punching a gift of a full toss from Stone wide of mid-off and celebrated with his trademark leap. It looked like a statement innings, moving to second on Australia’s all-time ODI centuries list just a day after he had vented his frustration at Cricket Australia for their handling of a review into his lifetime leadership ban.

Australia were 217 for 0 at the second drinks break after 34 overs, having not struck a boundary in the previous five overs. Head and Warner then went into party mode smashing 52 from the next 24 balls as Head raced past 150. But both men holed out in the same Stone over to stall Australia’s momentum a touch. A second rain delay cut two overs off the innings and saw Marcus Stoinis fall attempting a wild swipe first ball after the break. But it allowed Mitch Marsh to come in and smash 30 off 16 balls to finish the innings.

England never came close to chasing the adjusted target. Dawid Malan was caught behind cheaply while Jason Roy and James Vince opted to dig in rather than hit out as Josh Hazlewood and Pat Cummins proved extremely challenging under lights. The pressure eventually built as most of England’s batters had one foot on the plane home. Jos Buttler’s wild swipe across the line fourth ball to be caught off a leading edge for just 1, just nine days after holding the T20 World Cup aloft on the same ground, summed up England’s mindset. The game could have ended sooner had Australia’s catching been sharper. Zampa dropped two, including one off his own bowling that cost him three wickets in an over. Steven Smith missed a very difficult diving catch at slip, and substitute fielder Mackenzie Harvey, who was on for most of England’s innings as Head had felt ill after his innings, spilled another challenging chance at deep backward square having held another earlier on.

To make matters worse for England, Phil Salt was subbed out of the game with concussion after suffering a head knock and shoulder injury in a fruitless chase and dive to save a boundary. Salt had his left arm in a sling post-match but it is believed to be precautionary. Moeen Ali was subbed into the game having been rested after Buttler returned as captain.